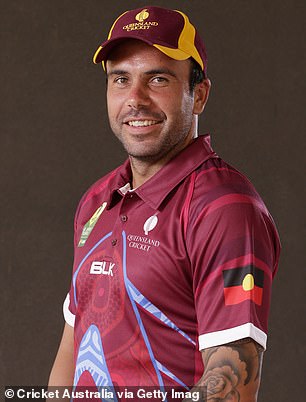 A club cricketer was left bowled over when he smashed a massive six – only to hit somebody’s car and get hilariously abused for doing so.

Preston White was playing for Toombul against Wynnum-Manly in the Queensland Kookaburra One-Day competition on Sunday afternoon when he hit an absolute peach of a shot.

Footage shows White pick the bowler’s length beautifully and drive the ball out of shot.

A spectator can be heard shouting, ‘That’s massive!’

A few seconds later a loud bang can be heard as the ball strikes something metallic.

Somebody from the crowd answers, ‘It’s a cricket ground.’

The video has since gone viral on social media, with thousands of likes and shares in the last 48 hours. 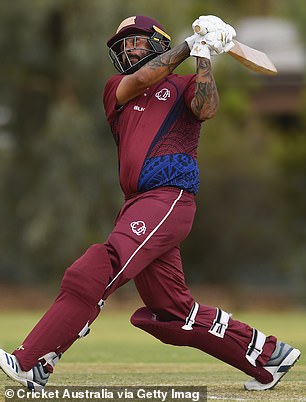 Queensland cricketer Preston Williams prompted a furious reaction after launching a huge six which hit a bystander’s car, much to the amusement of everyone else at the ground

‘I won’t lie, I was kinda hoping the next ball would end up in the same spot,’ commented one person.

‘Never been prouder to be Australian,’ said another.

‘Out of anyone it’s the bowler who that bloke should be after. That ball got exactly what it deserved,’ joked a third.