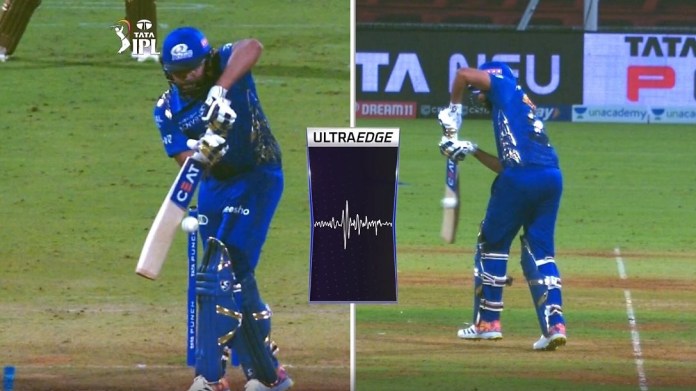 IPL 2022: CONTROVERSY strikes again in IPL 2022 as Rohit Sharma gets OUT because of technical glitch – The 2022 season of the Indian Premier League has had plenty of controversial decisions so far and the list had another new entry on Monday. The skipper of Mumbai Indians, Rohit Sharma was given out in a rather controversial manner, owing to a possible technical glitch. Follow IPL 2022 live updates on InsideSport.IN.

Also Read: IPL 2022: Another MASSIVE BLOW for Mumbai Indians, Suryakumar Yadav RULED OUT with an injury – Check OUT

Chasing a target of 166, Mumbai Indians needed a good start but they were dealt with a hammer blow when Tim Southee dismissed Rohit Sharma in the last ball of the first over. Southee bowled with scrambled seam and Rohit tried to played it on the leg side, but he could not get any connection.

IPL 2022: CONTROVERSY strikes again in IPL 2022 as Rohit Sharma gets OUT because of technical glitch against Kolkata Knight Riders – Watch Video

Instead, the ball brushed off his thigh pad before resting in the gloves of wicketkeeper Sheldon Jackson. The umpire had initially given not out, but KKR players seemed certain that the MI skipper had edged the ball and subsequently, Shreyas Iyer went for DRS.

What happened next will be spoken about for a while, for a probable technical fault cost Rohit his wicket. The UltraEdge did show a spike and the 35-year-old was given out, but replays showed that the UltraEdge spikes appeared even before the ball had touched the bat.

IPL 2022: CONTROVERSY strikes again in IPL 2022 as Rohit Sharma gets OUT because of technical glitch against Kolkata Knight Riders – Watch Video

Quite understandably, the opening batter seemed to be fuming as he felt there was no connection between the bat and ball. With this knock of 2 runs, Rohit has now scored 200 runs in IPL 2022 at a poor average of only 18.18.