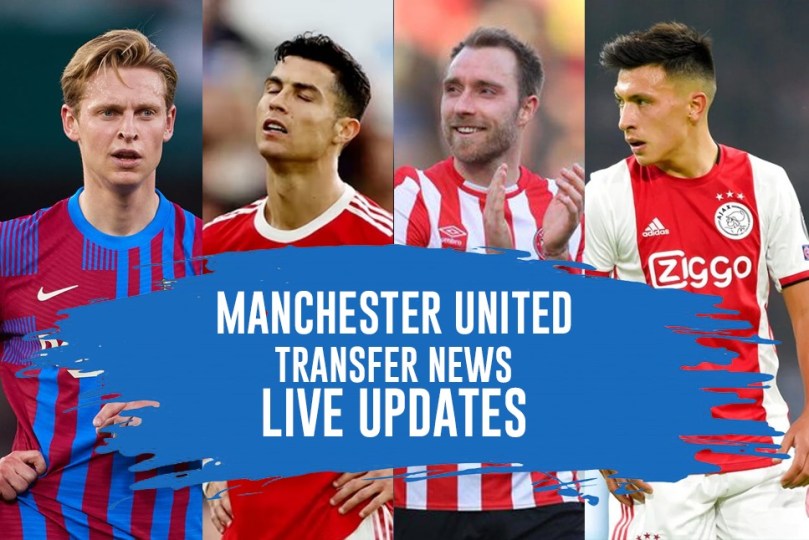 Man Utd transfer news LIVE: Manchester United’s transfer window hasn’t quite kicked off in the manner many would have hoped. The Frenkie de…

Man Utd transfer news LIVE: Manchester United’s transfer window hasn’t quite kicked off in the manner many would have hoped. The Frenkie de Jong move is stalling and Ajax are playing hardball over Antony and Lisandro Martinez. Tyrell Malacia remains the club’s only signing, although it’s hoped Christian Eriksen could join them shortly. Ronaldo’s future remains up in the air with United standing firm on their stance he is not for sale. The forward, however, won’t be joining his teammates on the club’s tour. Follow Latest Football News LIVE with InsideSport.IN

Cristiano Ronaldo ANGRY at reports as he opts out of Pre-Season tour due to ‘family reasons,’ Check out Man United’s official Pre-Season squad

Official. Cristiano Ronaldo will not travel with Manchester United on their preseason tour this summer, he’s not included in the list. 🔴 #MUFC

Manchester United accepted this situation as Cristiano has ‘additional time off to deal with personal issues’. pic.twitter.com/ouw9H4spM6

Christian Eriksen who had verbally agreed to join the Red Devils on 4th July for a period of 3 years has still not completed his medical in order to secure the transfer. The fans have become irritated with United’s slow process in pursuing these transfers. Manchester United legend Rio Ferdinand thinks Christian Eriksen will just be a squad player at Old Trafford. The Red Devils are trying to complete a deal for the free agent, 30. Brentford also want to re-sign Eriksen.

Contracts are now ready for Christian Eriksen to sign with Manchester Utd, just waiting for medical and then it will be completed. 🔴🤝 #MUFC

“I think Christian Eriksen is a squad player,” Ferdinand told his YouTube channel. “He doesn’t come as a starter, I would be very surprised if he comes into Manchester United as a starter.

“I think he’ll come in and play a particular role in and around it. The position he is likely to occupy will be similar to Bruno Fernandes and I don’t see him taking him out of the team.”

Bruno Fernandes to inherit Juan Mata’s No. 8 jersey ahead of the 2022/23 season, Tyrell Malacia given No. 12, Check out Man United’s squad numbers

A special advert to announce Man Utd’s new kit has reportedly been held in reserve amid uncertainty over Cristiano Ronaldo’s future.

According to The Athletic, the ad “remains in the creative process”. Ronaldo is absent from Man Utd’s pre-season tour for personal reasons, and could leave the club before the end of the transfer window.

The Blues are poised to pinch the Barcelona midfielder from under the noses of Manchester United, who have been in advanced talks for his services. De Jong, 25, is desperate to stay at the Nou Camp, having described Barcelona as his “dream club”.

As United set off for Thailand with a 28-man squad, Savage and Iqbal were the first youngsters to catch the Dutchman’s eye in the first week of training under new management.

Savage and Iqbal made their debuts as late substitutes against Young Boys in the Champions League group stage last season.