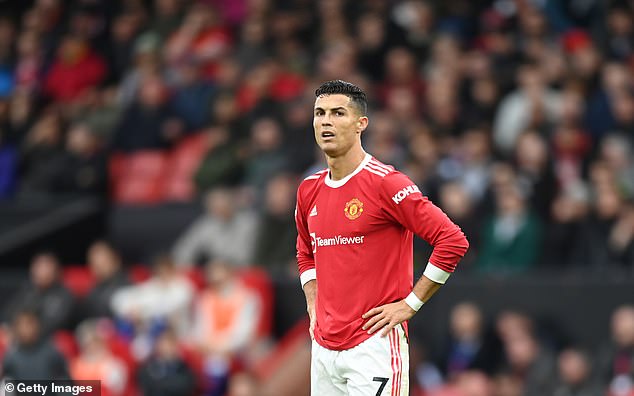 It was always going to be him, wasn’t it? He’s only been back in the Premier League for a few weeks and already Cristiano Ronaldo is player of the month.

Three goals in three games. The impact, the celebration, the muscles. He is, as the saying goes, inevitable. And it’s impossible not to get swept up by it.

Who cares if Mo Salah scored in more games in September and looked like the best player in the world? Does it matter that, in Manchester United’s loss to Aston Villa, Ronaldo often resembled one of those life-size cardboard cut-outs you can buy for £35 off Amazon?

Cristiano Ronaldo has run an average of just 3.7 miles per 90 minutes for Manchester United so far this season 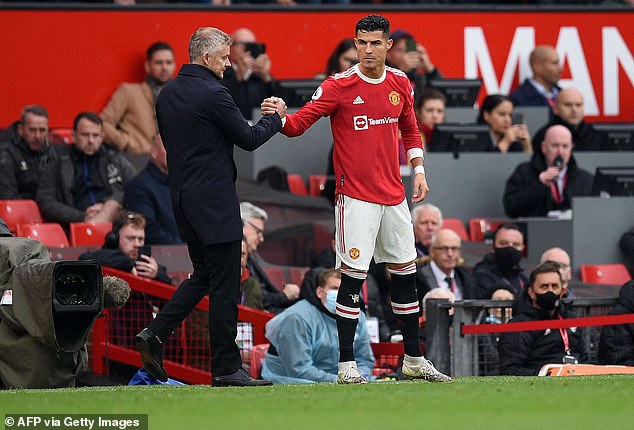 Yet where he goes, the spotlight follows. And so it falls on Ole Gunnar Solskjaer, a man never too far away from questions of whether he can deliver Old Trafford’s expectations. He doesn’t start Ronaldo against Everton and it’s not long until Sir Alex Ferguson suggests it wasn’t the right call. Will he eventually wonder if it was all worth it?

Everyone knew what Ronaldo would bring — shots and goals. And there are few greater in the history of football at doing that.

It’s no surprise, then, that since his return to Old Trafford no player in the Premier League has taken as many shots as Ronaldo. Eighteen in four games and in one of them he only played 30 minutes.

His shots have brought goals. A brace on debut against Newcastle. Another against West Ham. A goal in each Champions League game so far, including the incredible late winner against Villarreal. He knows how to make an entrance and provide a dramatic ending. 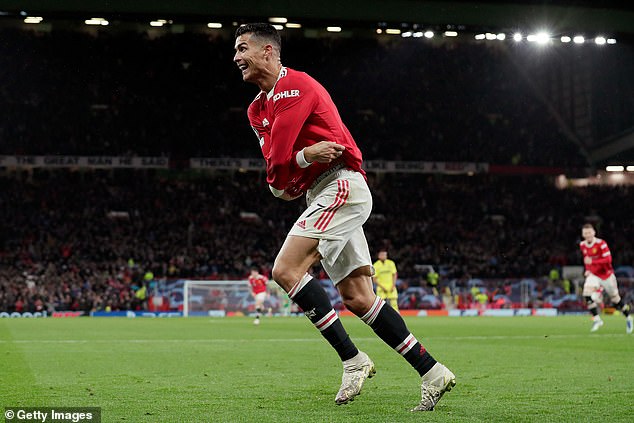 The positives that Ronaldo brings to United, in terms of goals and chances, are clear

Only Dominic Calvert-Lewin boasts a better Expected Goals (xG) per 90 minutes than Ronaldo of players to feature in more than 270 minutes this season. He’ll keep scoring, of that there is no doubt.

The concern is over what he doesn’t bring to United. For one, there’s not much running. Of the 72 forwards to have played at least 75 minutes in the Champions League this season, 67 of them have covered more distance on average per game than Ronaldo.

The Portuguese averages 3.7 miles per 90 minutes. At the top is Atletico Madrid’s Yannick Carrasco, with eight miles. Even Lionel Messi, who famously walks everywhere, manages 5.2. Koen Casteels, who plays for Wolfsburg, averages 3.9 miles. He’s their goalkeeper, by the way. 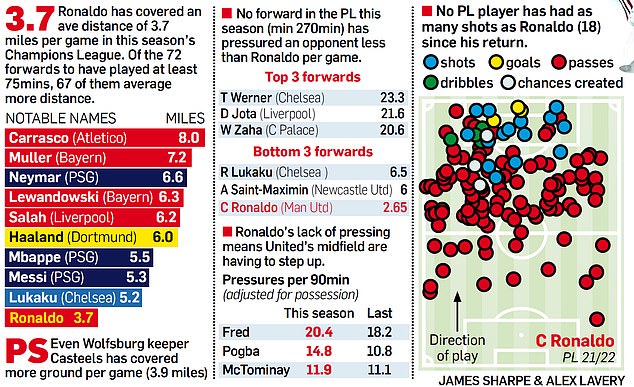 United fans will ask ‘so what?’ But this is a United team that Solskjaer had been so keen to build in the image of youthful vigour. Now, he’s got a 36-year-old who hardly moves up front.

No forward in the top-flight this season averages fewer pressures of an opponent per game than Ronaldo. He averages fewer than three a match. Timo Werner and Diogo Jota each apply more than 20.

We know how his goals impact the team, but what effect does his refusal to engage in the defensive side of the game have on United? It puts pressure not on his opponents but his own team-mates, specifically United’s central midfield.

The team’s PPDA, a figure that measures how intensely a team presses, has actually improved despite his arrival. The number of times United turn the ball over high up the pitch has also gone up.

But that’s because his team-mates are working harder. When adjusted for possession, United’s pressures in the final third have dropped yet those in the middle third have risen sharply. Fred, Paul Pogba and Scott McTominay are applying far more. 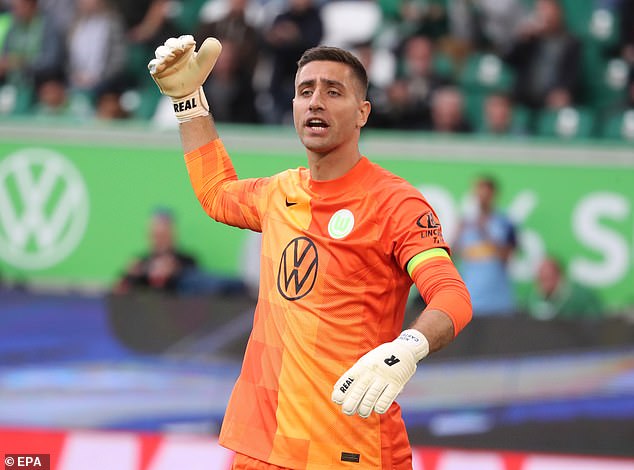 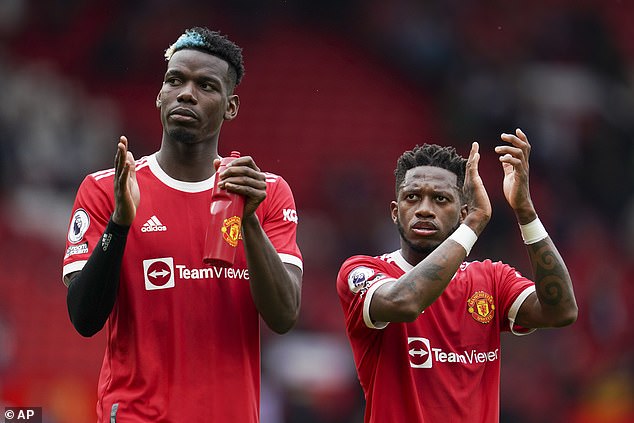 And this is where United’s weakest area can start to creak under the burden. With the onus on them to apply the pressure, often higher up the pitch than usual, it is likely to leave more gaps to exploit than if they pressed from the front and the midfield could hold their shape.

‘It’s not a Ronaldo problem, it’s a tactical problem,’ says Mail on Sunday columnist Danny Murphy. ‘It’s fine to have Ronaldo not running around like a lunatic pressing if the players around him do. But Pogba doesn’t like defending. It’s not Mason Greenwood’s strength. Bruno Fernandes is more reactionary with his defending.

‘Ole’s predicament is finding the balance between attack and defence. United play with four out-and-out attack-minded players and only six defensive-minded ones. That’s too many. That is not going to win you the league.’ 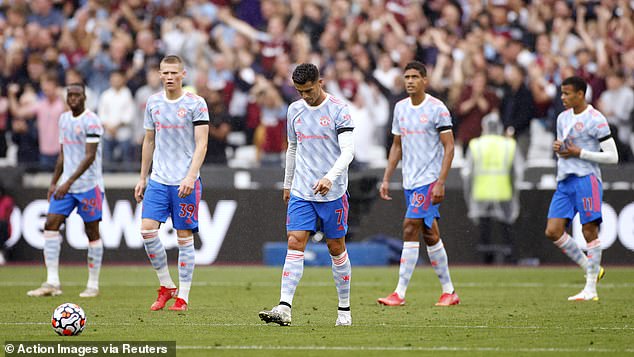 On the whole, it has not affected United too much. They are creating more chances this season, while conceding fewer shots.

But the warning signs are there. Newcastle’s goal in Ronaldo’s debut saw them exploit huge space in United’s midfield. Aston Villa had similar joy in their victory at Old Trafford.

United are yet to face any of their title rivals. Liverpool and Manchester City come in their next four.

For now, Ronaldo’s goals and his aura have kept him as the man of the moment. In time, we will see if that will continue to be enough.