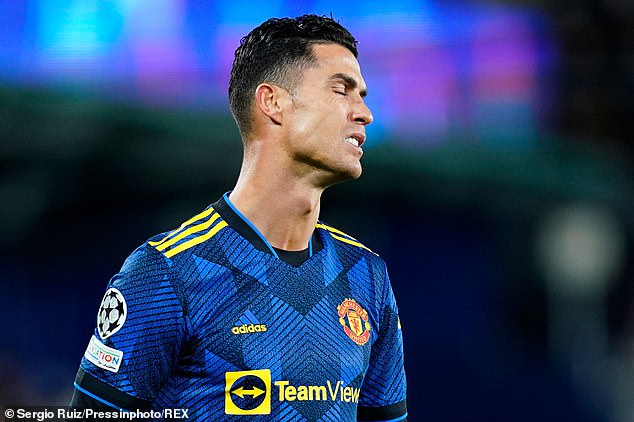 Cristiano Ronaldo is undoubtedly one of the best players to have ever lived having become a goalscoring monster wherever he plays, seeing him collect countless trophies and individual accolades in the process.

His hard work and determination has made him a global icon as a result with his CR7 brand helping him become the most followed sports athlete on social media.

He’s a defender’s worst nightmare and is guaranteed goals, given he has scored an eye-watering 799 times in 1,095 games for club and country so far in his career.

Ronaldo currently holds the Guinness World Record for being the highest goalscorer ever in international football and is Real Madrid’s all-time leading scorer after a trophy-laden spell that saw him win four Champions League titles at the Bernabeu.

And after winning everything there is to win and scoring every goal there is to score, the question remains: is there anything he can’t do?

Well, actually, yes there is. It’s scoring against Chelsea in the Premier League.

In 10 top-flight outings against the Blues, Ronaldo has never scored against them and that barren run stretches to 14 games when you add in appearances against Chelsea in the FA Cup, League Cup and Community Shield.

In the Portuguese’s defence, his one and only goal against Chelsea came in the 2008 Champions League final when he opened the scoring in Moscow in the 26th minute before Frank Lampard levelled things up on the stroke of half-time. 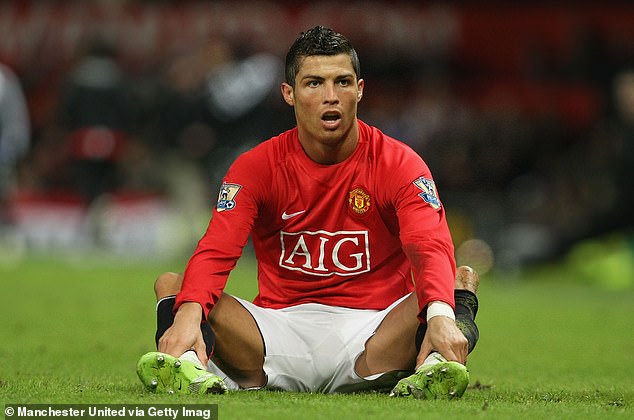 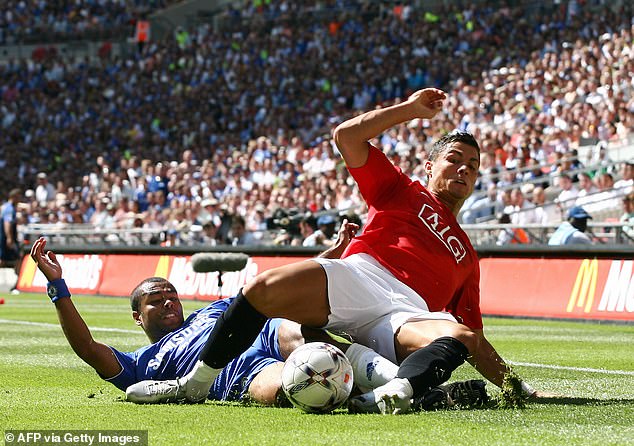 Chelsea are Ronaldo’s bogey team, given he’s scored just once in 15 games in all competitions 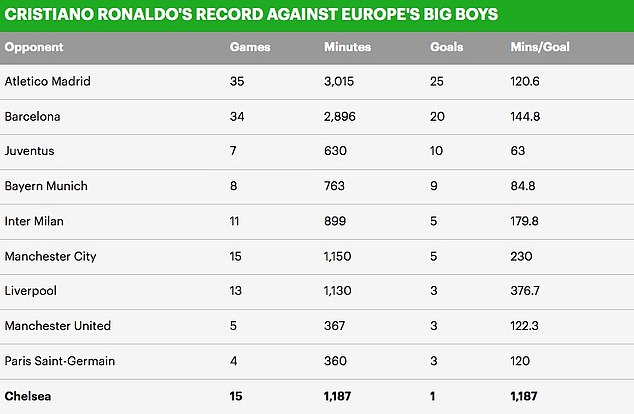 While United went on to win the resulting penalty shootout, which is famously remembered for John Terry’s slip, Ronaldo was the only United player to have missed his spot-kick out of the seven players that took one.

The omens don’t look good for the 36-year-old, given how he has notoriously always struggled against the Blues and that stretch could continue this weekend when he and his United team-mates make the trip to the capital to face Thomas Tuchel’s men at Stamford Bridge on Sunday.

The now-sacked Ole Gunnar Solskjaer often looked to Ronaldo to pull United out of a hole this season but even the forward’s efforts weren’t enough after a number of dismal defeats – including a 5-0 hammering by Liverpool, a 2-0 loss by Man City and a 4-1 thrashing by Watford – eventually cost the Norwegian his job.

United’s caretaker boss Michael Carrick will be hoping to rely on Ronaldo when they face the reigning European champions at the Bridge on Sunday but if his record is anything to go by, Carrick may need to look elsewhere. 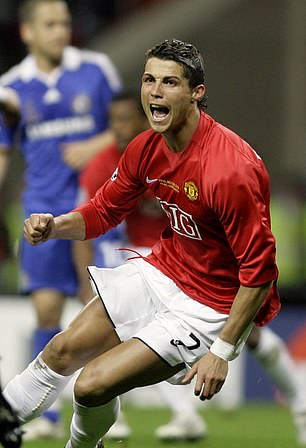 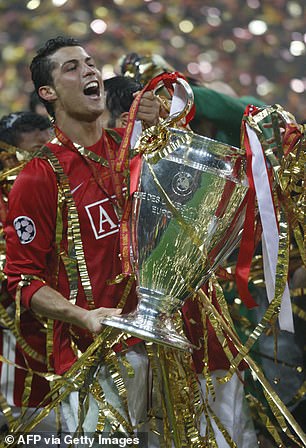 In the 1,187 minutes he’s played against the Blues, he’s just managed the one – albeit very crucial – goal against them, resulting in his worst minutes-to-goal by far against any of Europe’s top clubs.

That’s a staggering one goal in over 20 hours of football for one of, if not the best, goalscorer in football history.

Compare that to utterly ridiculous record against Atletico Madrid: in 35 games against the Spanish side – that has a reputation for being defensively sound – Ronaldo managed to score 25 goals past them, clocking up a crazy ratio of a goal every 120 minutes against them.

He had similar luck against Lionel Messi’s Barcelona during their famous Clasico duels, netting 20 times in 34 appearances against the Catalan side.

Ronaldo even managed to over a goal a game against the likes of Bayern Munich and former club Juventus, scoring nine goals in eight matches against the German giants and 10 goals in seven against the Old Lady. 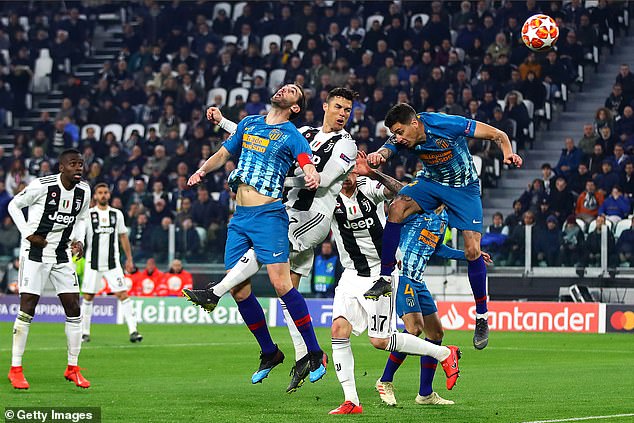 While he has struggled against Chelsea, Ronaldo has an unbelievable record against Atletico Madrid and the rest of Europe’s elite 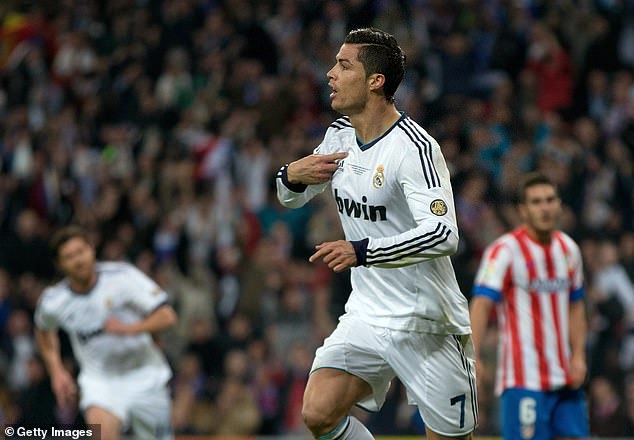 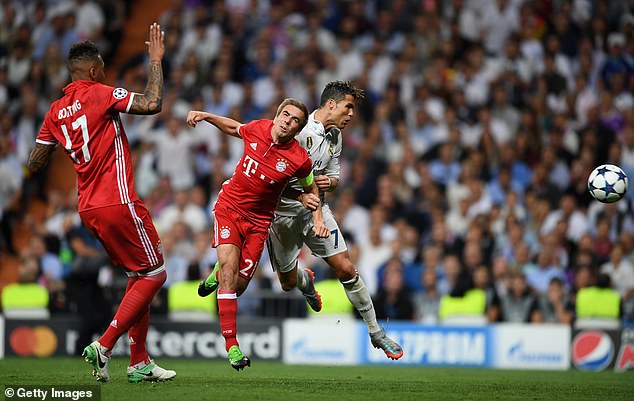 He has also enjoyed scoring against the likes of Bayern Munich, Barcelona and Inter Milan

Ronaldo has also found it effortless against top six sides in the Premier League, netting 11 times in 19 appearances against Spurs, six in 15 games against Arsenal and three in five against his current employers United.

But against Chelsea he has always struggled.

It must also be said that those 15 appearances against the Blues came for United before he hit the unbelievable goalscoring heights with Real Madrid and Juventus later on in his career.

And he did manage to grab a brace against the Blues for Real in a pre-season friendly in Miami back in 2013, which was most notable for Ronaldo doing his trademark ‘Siii’ celebration for the first time ever.

But friendly goals aside, that unwanted record and added pressure will be on his mind when he steps out onto the pitch at Stamford Bridge, especially given the crisis United currently find themselves in. 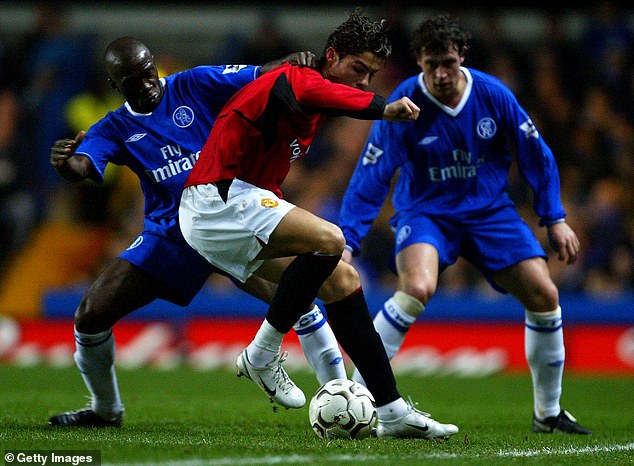 Sunday’s game at Stamford Bridge will come nearly 18 years to the day since Ronaldo faced Chelsea for the first time, which saw the Blues walk away with a 1-0 win on November 30, 2003

Chelsea are unbeaten in their last 10 games in all competitions and are currently sitting top of the Premier League table after 12 games, having won nine of those.

As it stands, Tuchel’s well-drilled Chelsea side are the undoubted favourites going into this Sunday’s crunch clash with United at the Bridge.

But if United are to have any hope or causing an upset, they are going to need their talismanic figure to break his duck in the league and end his unwanted streak that stretches all the way back to his first game against the Blues on November 30, 2003 – nearly 18 years to the day on Sunday.