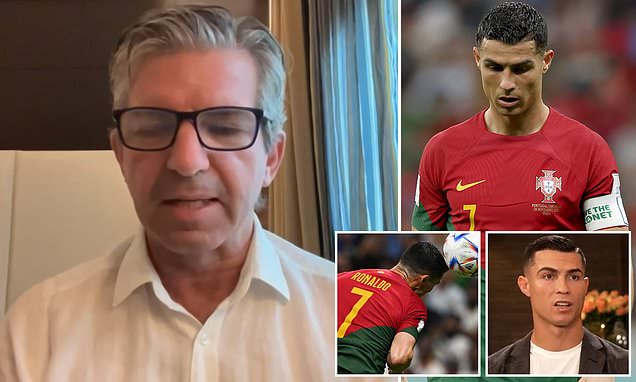 Cristiano Ronaldo is making himself look RIDICULOUS! His ‘Hair of God’ moment against Uruguay has made him a laughing stock, and Portugal are in danger of their tournament becoming all about him, Sportsmail’s Oliver Holt tells WORLD CUP CONFIDENTIAL

Cristiano Ronaldo has become a ‘laughing stock’ after claiming Portugal’s first goal against Uruguay on Monday despite appearing to miss the ball.

The 37-year-old tried to get on the end of Bruno Fernandes’ cross, but seemed to fail to make contact as the ball went past him and into the far corner. Ronaldo wheeled away in celebration, insisting the goal was his. However, advanced technology indicated Ronaldo had not got a touch.

Sportsmail expert Oliver Holt thinks Ronaldo has made a fool of himself through his desperation to claim the goal, with footage emerging of him still complaining after the final whistle even though his team won.

Daily Mail sports writers Ian Ladyman, Oliver Holt, Martin Samuel and Kathryn Batte were speaking as part of Sportsmail and MailPlus’s daily videocast ‘World Cup Confidential’. It appears on MailOnline every morning of the tournament and can be found on our YouTube channel.