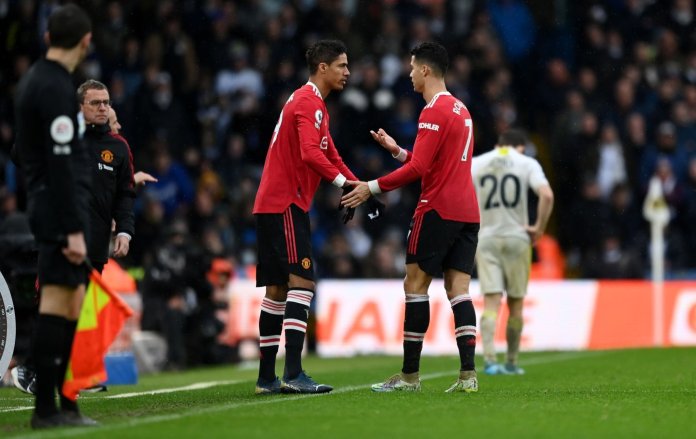 Manchester United: Ralf Rangnick and Cristiano Ronaldo – Manchester United’s interim manager could face a dilemma in choosing his squad to face Antonio Conte’s Tottenham Hotspur at the weekend as Cristiano Ronaldo who had missed the previous training sessions due to a major hip flexor problem has gone missing again. Although a piece of positive news emerges for the German boss as Raphael Varane returns to training after being ruled out from the Manchester Derby due to a positive COVID test. Follow InsideSport.IN for the latest sports news and updates.

Man United and interim boss Ralf Rangnick have been handed a major selection boost after defender Raphael Varane returned to training on Wednesday morning. Cristiano Ronaldo will miss training on Wednesday with an ongoing hip flexor problem, having missed Manchester United’s derby day defeat to Manchester City on Sunday. The forward is yet to participate in the main team sessions since missing Sunday’s Manchester derby.

Cristiano Ronaldo was at Carrington on Tuesday but did not a participant in #mufc training. It has not yet been made clear as to whether he participated in Wednesday’s full session #mulive [@SamWallaceTel, @TelegraphDucker]

The 37-year-old was back at Carrington for Tuesday’s session, although he did not train with the group and will miss out again today. The former Real Madrid forward first missed training on Friday having reported the aforementioned hip flexor problem to staff.

He later flew back to Portugal and was not at the Etihad Stadium on Sunday to watch his team-mates soundly beaten by their local rivals.

Rangnick, however, responded to the reports around Ronaldo’s absence by saying: “My doctor came to see me on Friday morning before training and told me Cristiano Ronaldo cannot train because of some problems with his hip flexor and the same was true on Saturday and that’s why he couldn’t be part of the squad.”

But the superstar arrived at the club’s training complex ahead of the team session on Tuesday, as they prepare for this weekend’s clash with Tottenham Hotspur. According to The Sun, Ronaldo was the last to leave after being escorted to Carrington by a team of bodyguards earlier in the day.

Rangnick will be hoping his training sessions can help turn their fortunes around after Sunday’s result saw the Red Devils drop down the table into fifth position. Raphael Varane was spotted arriving at the club’s Carrington training complex as fellow defender Luke Shaw was not present.

The pair recently returned positive Covid-19 tests, meaning they were forced out of action for their team’s Manchester derby fixture last Sunday. In fact, Varane has missed his side’s last five games. After being scheduled to start against Brighton and Hove Albion last month, Rangnick had to make a late change to his starting lineup.

Ronaldo was the first of many players pictured arriving at Carrington. The likes of Fred, Diogo Dalot, Dean Henderson, and more arrived in their luxury cars. As it stands, United are a point behind fourth-placed Arsenal but the Gunners have three games in hand on Rangnick’s men.