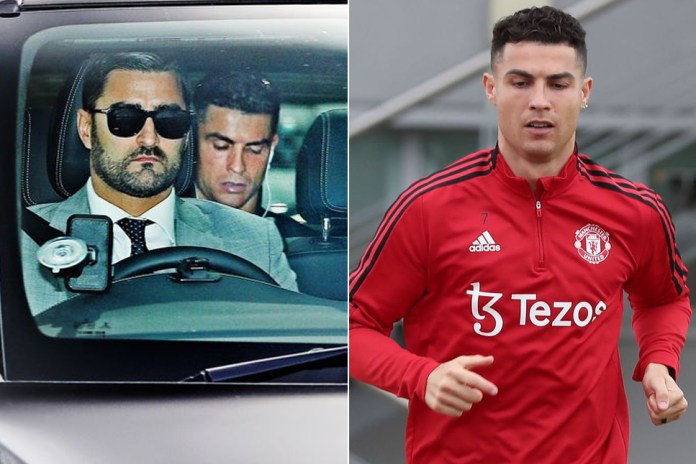 Cristiano Ronaldo Son Death: Cristiano Ronaldo arrives for training after death of baby boy – Cristiano Ronaldo is pictured at Carrington for the first time since the tragic death of his baby son just 48 hours after announcing the shocking news. The Man United star completed a full training session and is expected to start against Arsenal. Follow Football News LIVE Updates with InsideSport.IN

Cristiano Ronaldo has been pictured for the first time since the tragic death of his newborn son. The Manchester United striker was given a leave by his club for as long as he needed but opted to head into their Carrington training base on Wednesday and took part in the full session with team-mates.

He was seen in the back of a car on the way into United’s training complex, with earphones in while he sat behind the driver in the back seat. Ronaldo was absent for his side’s 4-0 defeat by Liverpool on Tuesday night and there has been a massive outpouring of support for both him and his partner Georgina Rodriguez.

A statement from Ronaldo and Rodriguez on Monday confirmed the death of their baby boy as ‘the greatest pain’, but said their baby girl survived.

‘It is with our deepest sadness we have to announce that our baby boy has passed away. It is the greatest pain that any parents can feel,’ the announcement read.

‘Only the birth of our baby girl gives us the strength to live this moment with some hope and happiness. We would like to thank the doctors and nurses for all their expert care and support.

‘We are all devastated at this loss and we kindly ask for privacy at this very difficult time. Our baby boy, you are our angel. We will always love you.’

United have a big game coming up against Arsenal on Saturday and it seems as though their talismanic forward will be available for selection.

In his absence for the defeat by rivals Liverpool on Tuesday, there was applause and a rendition of You’ll Never Walk Alone from the home fans as a gesture of support for him and his grieving family.

In unison, both sets of supporters stood up on the seventh minute, which is Ronaldo’s jersey number, to applaud in what was a marvelous moment in football.

United, Ronaldo’s current club and the team where he cemented his status as a premier league legend, posted on Instagram: ‘Your pain is our pain. Sending love and strength to you and the family at this time.’