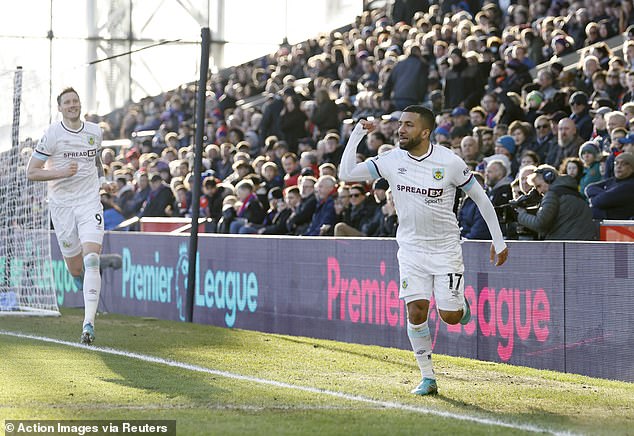 A third of all Burnley’s points this season have now come in the space of seven days. After these 90 curious minutes, Sean Dyche’s side might feel that one is only a third of what their second-half display deserved. And yet, the quirk of this strange game? Crystal Palace will wonder how they didn’t take all three, too.

For 45 minutes and 40-odd seconds they were in total control, leading thanks to Jeffrey Schlupp’s early goal – and the magic of Michael Olise. Burnley could hardly have posed less of a threat had they tried.

But then, out of nowhere, the visitors levelled thanks to Luka Milivojevic’s own goal. And from there, they were excellent for half an hour or so. Wout Weghorst came close with a header, he had a winner ruled out for offside, too.

Come the final whistle, however, Palace looked like the only winners. Wilfried Zaha hit the post and soon Burnley backs hit the wall once more.

On this pivotal day in the fight for survival, they held on. So wins over Brighton and Tottenham have been consolidated with a hard-fought draw here.Last Saturday morning, they sat bottom, seven points from safety.

By this Saturday night, they were one place and one point from safety. It’s now one defeat in seven.For Palace, this will go down as yet another of those days under Vieira. Amid the frustration, though, Olise’s majesty shined through once more. He really is a special talent.It took almost half an hour for Erik Pieters and Burnley to find a way to stop him. 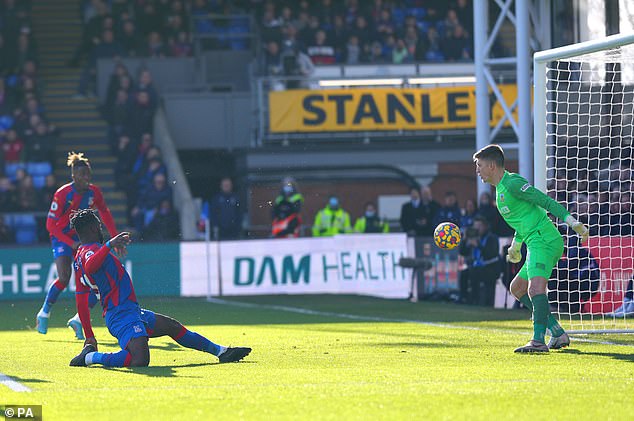 The winger had lit up the early stages, dousing an oft-flat first half in dashes of colour and brilliance.But then one flash of his feet jolted to a painful halt. As Olise attempted to skip inside Pieters, their knees collided. Suddenly the winger was down. In pain, in need of medical attention.Alas, it proved only a temporary reprieve for Burnley.

After a few minutes of moving gingerly, Olise gathered the ball inside the area, stood Pieters up and curled a shot that needed a sharp save from Nick Pope.Shame for Dyche that no one in Burnley white had an answer earlier, when from a similar position on the right flank Olise shuffled towards Dwight McNeil, feinted to go one way, then the other, before firing in a low cross – with his wrong foot. All Schlupp had to do was reach it.

Olise had started the move too, freeing himself near halfway with more quick feet. No wonder they adore him in these parts. From there, Palace probably should have stretched their lead.Schlupp had a shot headed away, Nathaniel Clyne tested Pope from long range. 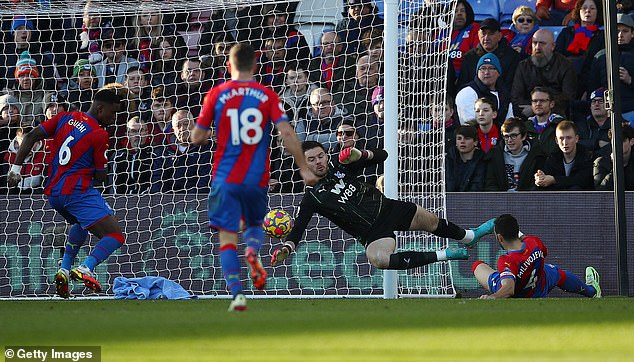 However, Luka Milivojevic put the ball in his own net to level the tie early in the second half

Olise came close to netting himself midway through the half after Zaha raced down the left and slid a pass across the box. Pieters got enough of a touch on Olise’s shot to deflect it just over.

At the other end, very little had happened whatsoever. Save Aaron Lennon’s early shot from distance, Burnley created next to nothing as Palace dealt well with the aerial threat of Jay Rodriguez and Weghorst.In the first half, anyway.

One slip-up, 40 seconds after the restart, cost them dear. A ball into the box was nodded down by Rodriguez to Lennon, whose low cross was skewed into his own net by the unfortunate Milivojevic. 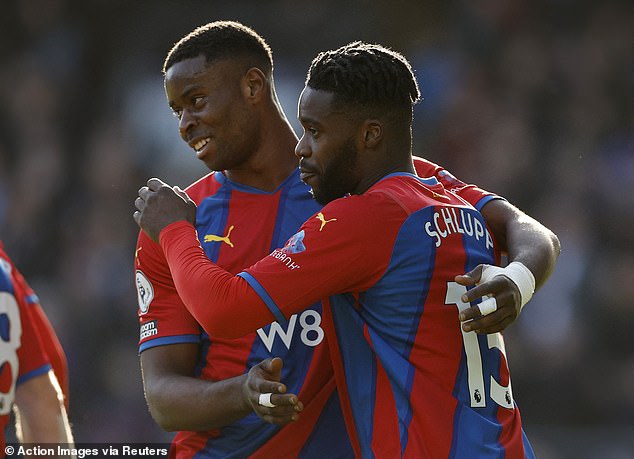 Following the draw, Palace stay in 11th while Sean Dyche’s side move within one point of safety

It came from nothing but shifted the direction of this game. Suddenly Burnley were enjoying the ball and it was Palace’s turn to soak up waves of pressure.

In keeping with the oddness, however, Burnley didn’t manage a shot on target until Weghorst rose to meet a corner and his header needed tipping over by Jack Butland.

The Burnley striker found the net with 24 minutes to go, firing into the roof of the net after Rodgriguez’s shot was parried.

The offside flag denied Weghorst this time – Rodridguez had strayed beyond the Palace back four.

For all that time, Olise and Zaha had been spectators but in a flash they roused Selhurst Park from its slumber.

Olise’s lovely crossfield ball freed Zaha whose first shot was beaten away. His second effort moments later hit the base of the post.

That proved the closest either side came.