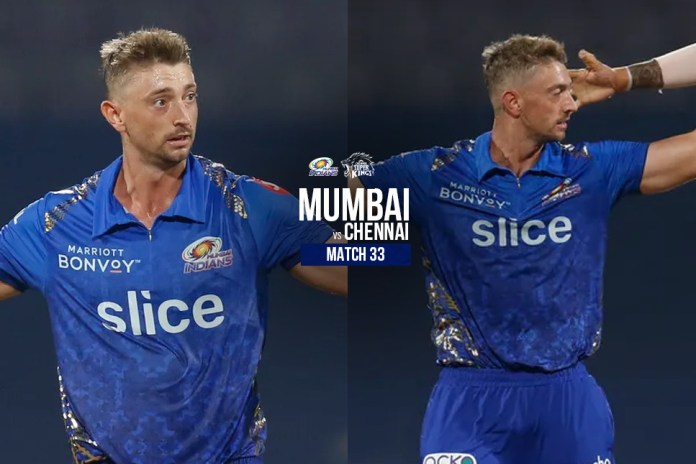 MI vs CSK LIVE: Daniel Sams picks 4/30 on MI return – Australian pacer Daniel Sams made an astonishing comeback on his Mumbai Indians return as his fiery spell wreaked havoc on Chennai Super Kings. Having previously picked a solitary wicket in his previous games, Sams made up for his poor form after picking up 4 splendid wickets in MI’s all-important game against CSK. Ruturaj Gaikwad, Mitchell Santner, Ambati Rayudu, and Shivam Dube all fell victim to the Aussie pacer as MI defends their moderately low target of 155. Follow IPL 2022 and MI vs CSK Live Updates on InsidSport.IN

Mumbai Indians have been in poor form since the start of this season. They are currently the only side who haven’t won a single game this season. Heading into the El Classico against CSK, MI had a shaky start, till Tilak Varma’s heroics helped them achieve a respectable score. But it has been Daniel Sams who has been the key man for the Mumbai outfits after scalping 4 wickets by giving away just 30 runs.

Daniel Sams dismissed CSK opener Ruturaj Gaikwad on the very first ball of the innings. A back-of-a-length delivery pitched outside the off stump, invited Ruturaj to play a shot to the backward point. In what appears to be harmless delivery, Gaikwad failed to measure the bounce of the ball and gifted a simple catch to Tilak Varma at the backward point.

In his very next over, Sams yet again dispatched another Chennai batter. This time his victim was the deadly Mitchell Santner. A short-length ball provoked the Kiwi player to hit a wayward shot. A simple top-edge saw Jaydev Unadkat take a dolly catch at mid-wicket as Santner departed after scoring 11, while Sams enjoyed his second wicket.

Back after a small gap, Sams this time picked up the deadly Shivam Dube on his third over of the match. A good-length ball pitched outside the off-stump saw Shivam Dube throwing his wicket away. No movement of the feet as a rooted Dube attempted to push the ball away and ended up gifting a thick outside edge which was comfortably caught by Ishan Kishan.

Daniel Sams picked up his fourth and final victim of the game on the penultimate ball of his fourth and last over. This time his victim was none other than the danger man Ambati Rayudu who had gone on to build a strong inning of 40 runs with 2 fours and 3 sixes. A wayward full toss on the leg stump saw Rayudu hitting the ball far and wide over the long-off. With the ball landing much ahead of the boundary, a valiant diving effort from Kieron Pollard saw the former West Indies International take a sensational catch to gift Sams his fourth wicket on his MI return.