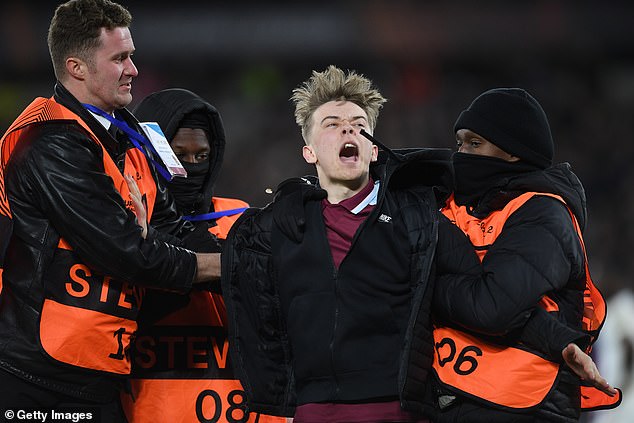 David Moyes criticised the supporter who ran onto the pitch and ruined a promising West Ham attack during the 1-1 Europa League draw with Lyon.

A historic match for the Hammers ended on a sour note after a pitch invader – the second of the game – jumped out of the home end with 10-man West Ham actually mounting a rare attack.

‘I was baffled,’ said the West Ham boss. ‘This is a really good football club doing so many good things.

‘But those things tonight didn’t help, we were on a counter-attack with an opportunity to score.’

The Hammers, playing in the quarter-finals of a major European competition for the first time in 41 years, were up against it after Aaron Cresswell was controversially dismissed for a foul on Moussa Dembele before half-time.

The decision could have left West Ham with a mountain to climb ahead of the second leg in the French city overlooked by the Alps next week.

But Jarrod Bowen’s second goal in as many matches, after a month out injured, put the 10 men 1-0 up before Tottenham loanee Tanguy Ndombele hauled Lyon level. 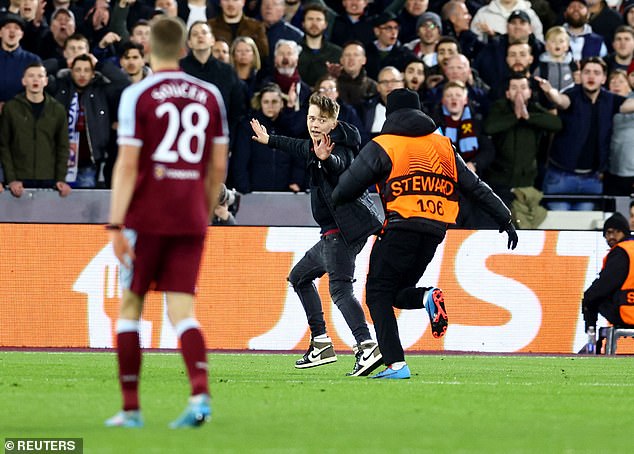 Nevertheless, a draw keeps West Ham’s dream of a place in the semi-finals, against either Barcelona or Eintracht Frankfurt, well and truly alive.

It promises to be a spicy return leg in the culinary capital of France after tempers occasionally boiled over, while Dembele’s Cristiano Ronaldo-style wink after Cresswell’s red card will not have gone unnoticed among the Hammers ranks.

Moyes was booked by German referee Felix Zwayer for protesting about the red card at half-time, but refused to be drawn on the official or the decision.

He added: ‘The only thing I’m going to say is there was a tackle on Bowen which was a foul. It was the same phase of play as the red card, and I would have expected VAR to do something about it. 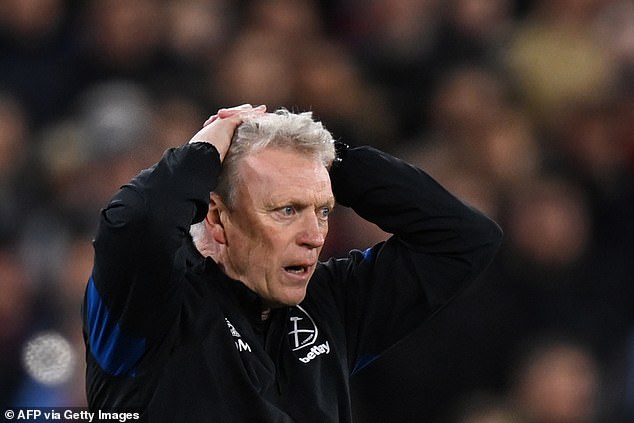 ‘I’m certainly not going to talk about the referee, not at all.

‘It was not a good performance by us but it was a resilient performance in the second half with 10 men.

‘We didn’t have much of the ball in the second half. Technically they were very good, but we defended well and made it hard for them.’

Lyon may be having an erratic season domestically – they currently lie ninth in Ligue 1 – but they are unbeaten in this competition and knocked out Porto in the last 16. 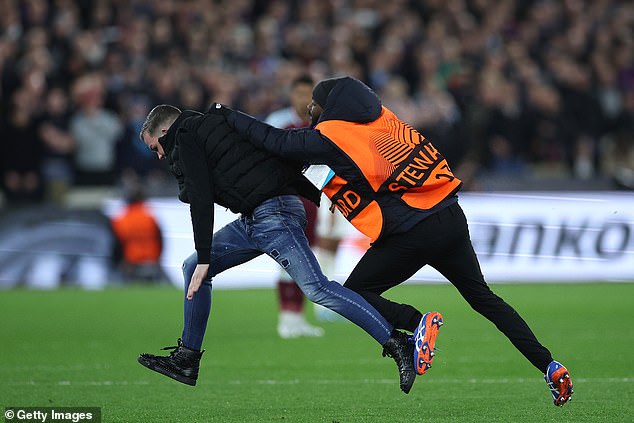 They are also seasoned European campaigners and showcased their repertoire of the darker arts, infuriating West Ham when Jerome Boateng and Ndombele both stayed down after no foul had been given.

‘I think the games in Europe, the way they are played, we’ve moved on from soft free-kicks in this country,’ said Moyes.

‘I think the refs we have had have been good and allowed the game to flow. But this game never got the chance to flow.

‘We’ve got a really difficult game to come, but we expected that. The first leg is always difficult and hard to get a defining result.

‘The game is very much all to play for, at half-time I would have taken that.’