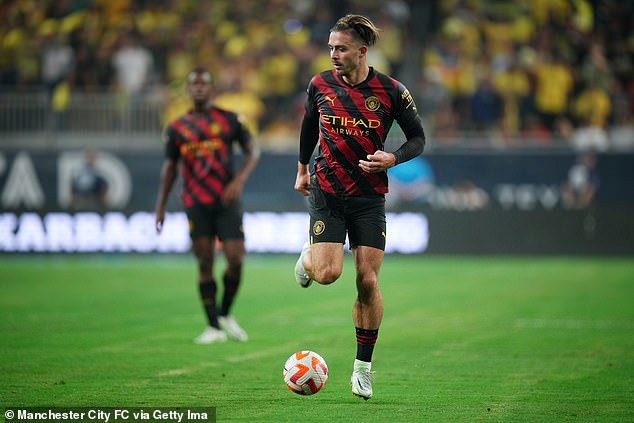 In what was an occasionally tempestuous friendly on a difficult surface, Pep Guardiola gave minutes to the majority of his travelling squad – but Erling Haaland was still left waiting for a debut.

Haaland, the £51million signing, had a night off as 61,223 flocked to the NRG Stadium to see the Premier League champions.

Grealish gets down and dirty

This friendly might have been thousands of miles away from Manchester but Jack Grealish must have felt right at home. Scythed down by the opposition at every opportunity and relentlessly booed by the home crowd: this could have been any given Premier League ground.

Grealish has a big second season on the horizon and showed a real desire to make an impact, even if this was merely a first friendly of the tour. The referee, Armando Villarreal, certainly knew of his existence, with the pair often deep in conversation about penalty appeals. 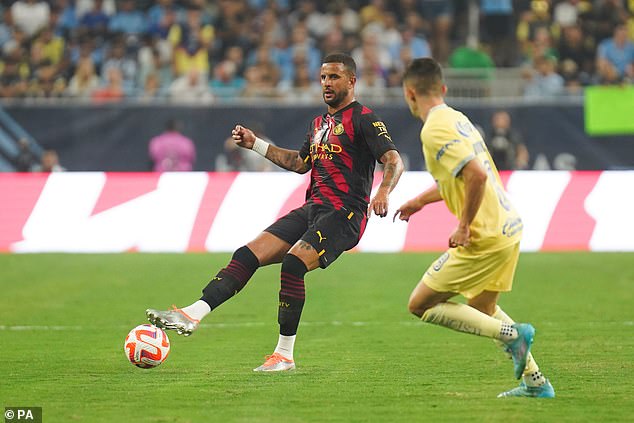 Veteran defender Kyle Walker was strong at the back, limiting the attacking threats of Mexican side Club America 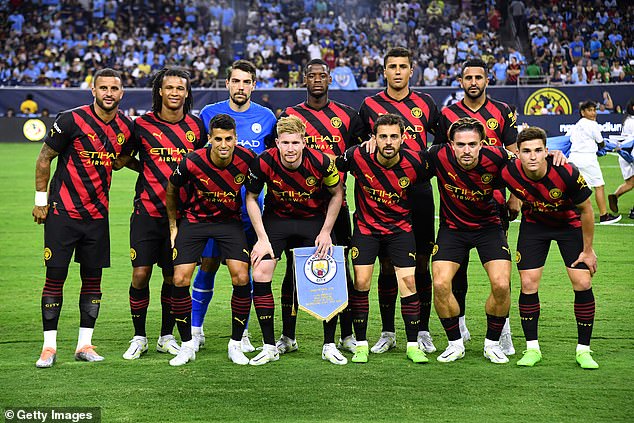 Despite the ‘friendly’ nature of the contest, City fielded many of their stars as they fine-tune their preparations for the Premier League starting next month

He was hacked down at the end of a mazy run, where he took three Club America defenders out of the game, and constantly barracked. Grealish showed purpose, dropping into dangerous pockets, but could not escape rough treatment – some of which the broadcaster inside the NRG refused to show on the big screen.

Perhaps that will serve him well for the months to come. Guardiola will be impressed by the way in which the winger continued to persevere.

Kevin De Bruyne picked up from where he left off. Two goals – the first a curling effort from 20 yards, the second a more instinct run and slide underneath Guillermo Ochoa – indicated that he is in the mood to add even more this term.

Last year was De Bruyne’s most prolific of his career with 19 goals – 15 of which coming in the Premier League – after there came a real drive to make sure the Belgian’s starting position is more advanced than ever before.

That could see him play up almost alongside Erling Haaland, feeding off the Norwegian, this season. His directness makes him look comfortable in those pockets. 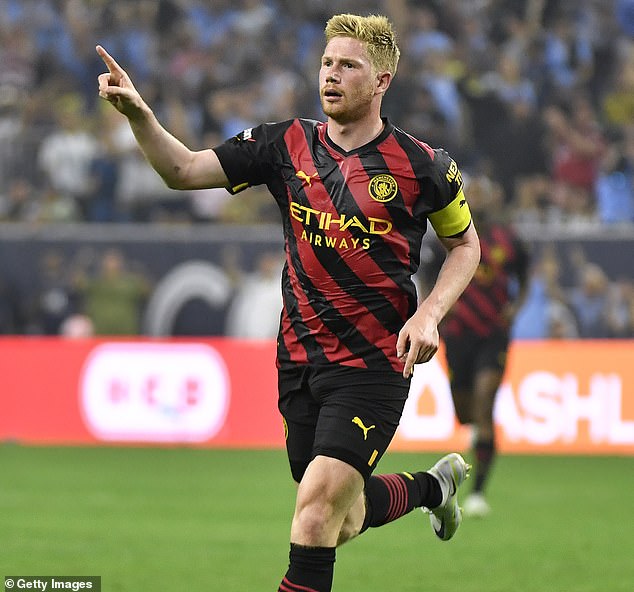 Kevin De Bruyne was the standout for Manchester City, scoring twice in the first half 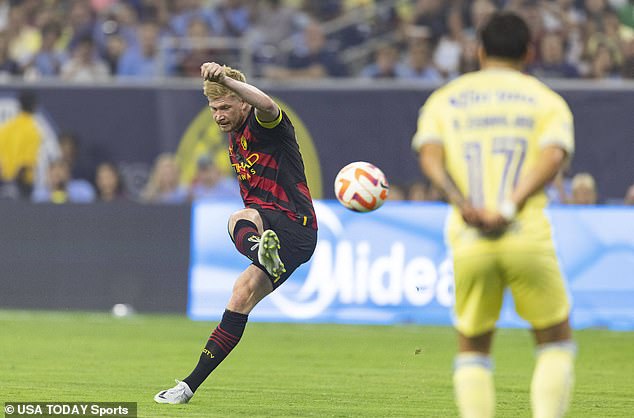 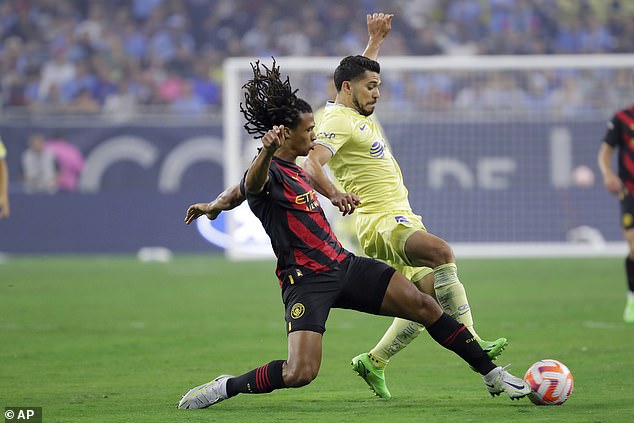 Kalvin Phillips spent some time earlier in the week discussing how difficult it might be to stake a claim for a regular spot in Guardiola’s midfield given the options at the manager’s disposal.

‘I know there will be times I’m pulling my hair out because it’s so difficult but that’s what I wanted,’ he said.

The England international has joined City with his eyes wide open about the task in hand but probably did not envisage his first outing as a £42million signing to come at centre half.

Phillips entered the fray at half-time and that he dropped into the back four, alongside youngster Luke Mbete, proved the issues City currently have in that area. Ruben Dias has been unwell, although should return for the friendly against Bayern Munich, while John Stones is with the Under 23s in Croatia and Aymeric Laporte was left at home injured.

Phillips will hope this was a one-time experience.

Haaland’s debut on hold for Citizens

City supporters will have to wait a few more days for their first glimpse of Haaland. The striker was named among the substitutes but did not warm up before kick-off, with no prospect of making his bow.

Haaland only started training with his new teammates this week once they had arrived in Houston and City are managing his minutes after a campaign with Borussia Dortmund that included a number of injuries and one that ended only a matter of weeks ago after international duty with Norway.

The 22-year-old, donning a hoodie rather than matchday gear, was sat alongside Dias and his appearance on the big screen was greeted by huge cheers. 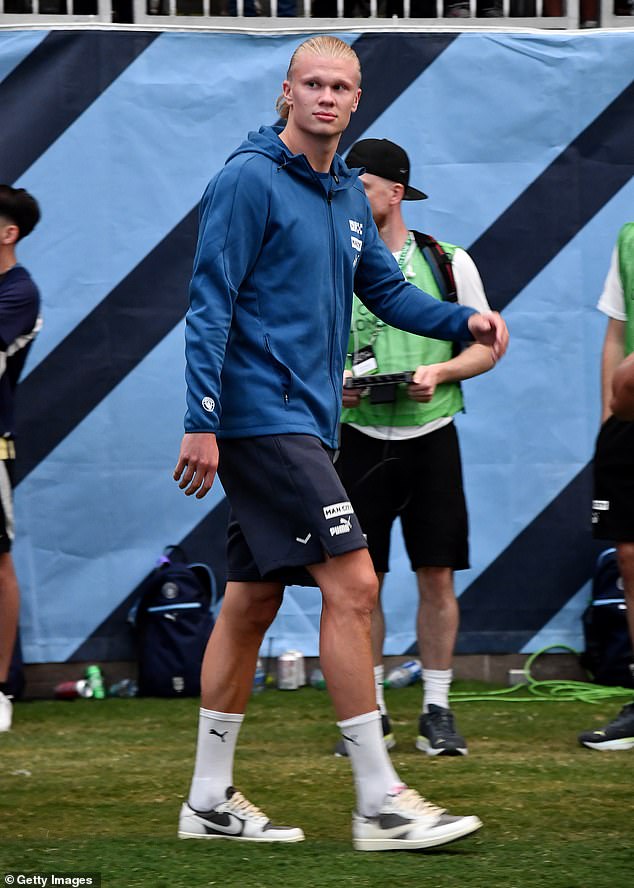 Star off-season recruit Erling Haaland cooled his heals on the bench, as he awaits his first start for City 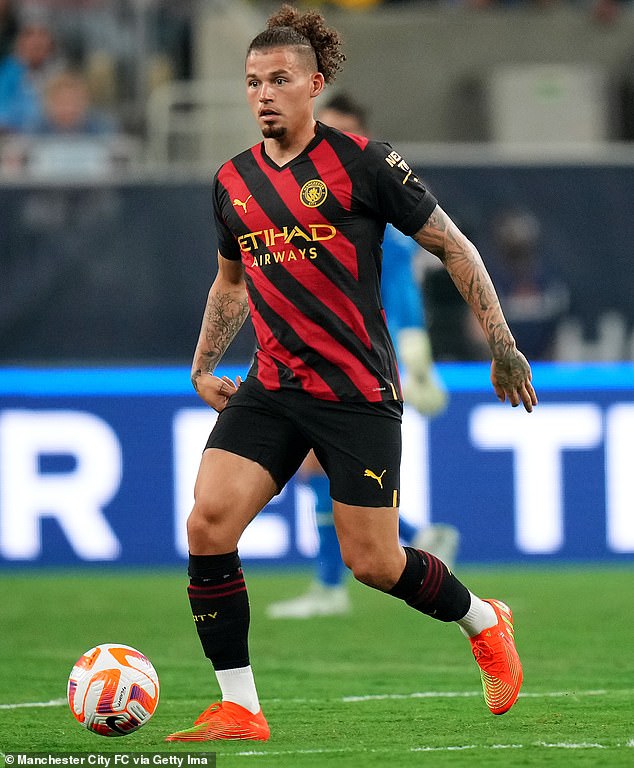 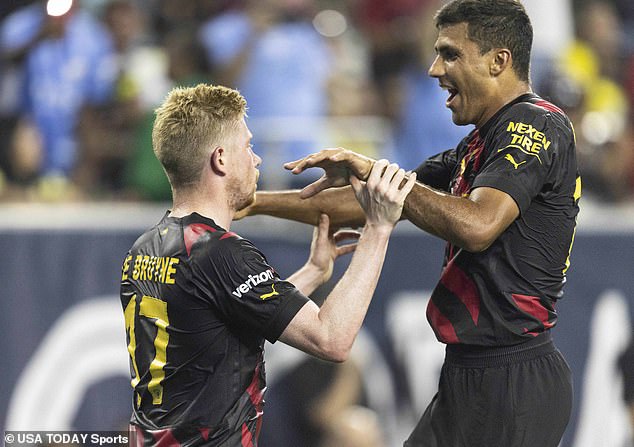 Alvarez one to watch

There is much excitement for the second striker signed by City this year, Julian Alvarez, and there were a few moments that showed why.

While the Argentine did fluff one chance before the break, overrunning a second touch when sent clear by the impressive Riyad Mahrez, his overall contribution was encouraging.

Alvarez’s link-up play suggested he will be equally adept at operating through the middle or on either wing, coming deep and in turn allowing De Bruyne to break clear.

A number of clever diagonal balls and little flicks showcased the sort of vision that City crave in the final third.

And there was a scrappiness to his game, tenaciously harrying defenders and turning over possession in areas of the pitch that can hurt the opposition.