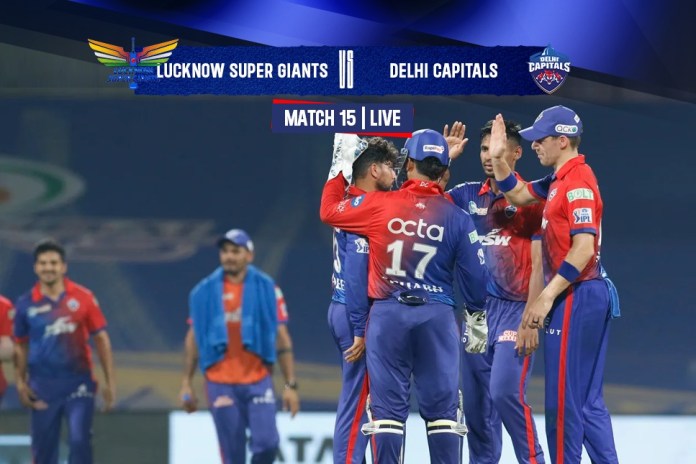 IPL 2022 – LSG beat DC Highlights Quinton de Kock starred with a stunning 80 as Lucknow Super Giants made it 3 wins in 3 with a six-wicket win over the Delhi Capitals. Chasing 150 to win, the South African keeper made light work of the chase, but needed Krunal Pandya and Ayush Badoni to finish things up in the final over. Earlier, Prithvi Shaw scored a stunning 61 to help DC to 149 in what was a subpar total at the DY Patil Stadium on Thursday. Follow IPL 2022 LIVE updates with InsideSport.IN

LSG beat DC Highlights – Delhi Capitals below-par total: Lucknow Super Giants captain KL Rahul won the toss and put Delhi into bat on what was a tricky surface at the DY Patil Stadium. Prithvi Shaw got the Capitals off to a blazing start with some fine boundary hitting as David Warner watched on from the other end.

Shaw scored the bulk of the runs in a partnership of 67 with Warner, who managed only four in his return to the Delhi franchise after nine years. Rovman Powell, promoted to No.3, struggled as the Capitals slipped under the pressure from the spinners, with Ravi Bishnoi and Krishnappa Gowtham putting the breaks on.

Rishabh Pant and Sarfaraz Khan put on a rescue act as they played out the threat as they marched along. The duo never took off in the final overs as some fine death bowling from Jason Holder kept Delhi in check, as they could only motor along to just 149.

IPL 2022: In response, Quinton de Kock and KL Rahul put on a fine opening partnership, putting on 73 off the first wicket. De Kock took particular liking for Anrich Nortje, plundering him for 19 in his first over, in what was not the best of starts to the new season for the South African speedster.

Kuldeep Yadav and Lalit Yadav kept the runs in check in the middle overs, but De Kock’s knock meant that LSG were never under much pressure and their batting depth meant that the newcomers sailed over the line in the final over. Ayush Badoni finished off the game with a boundary and a six, to make it three consecutive wins for the Super Giants.