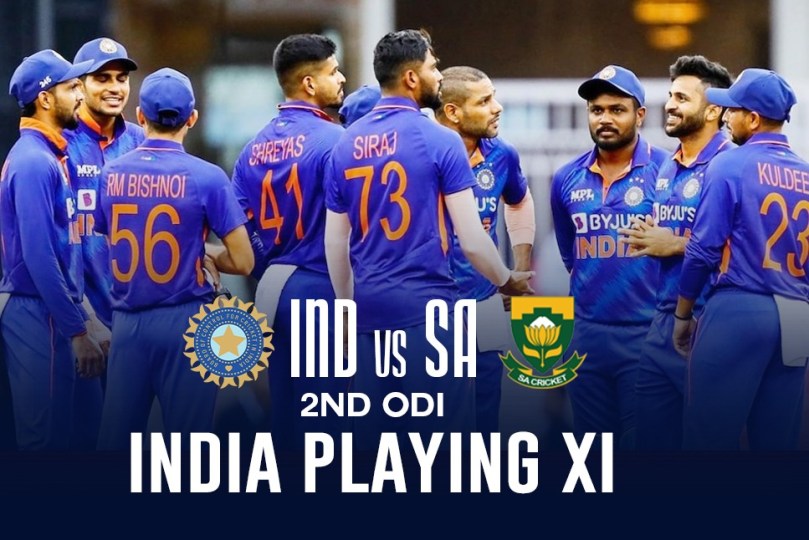 India Playing XI 2nd ODI: India vs SouthAfrica 2nd ODI LIVE: India’s loss in the 1st ODI wasn’t a big deal as it was about getting some crucial match practice under the belt. But the manner will disappoint the team management. The bowlers despite a great start surrendered to the brilliance of Heinrich Klaasen and David Miller. As for the top order, they could not stand up to Kagiso Rabada & Co. But despite poor bowling in the second half of the innings, Shikhar Dhawan won’t have Deepak Chahar available as he has been ruled out with a twisted ankle. Avesh Khan will continue in his place. But Shahbaz Ahmed is likely to get his debut. Follow IND vs SA LIVE Updates on InsideSport.IN.

From 92/3 in 20 overs, Team India gave away 157 runs in the last 20 overs of the match. Mohammed Siraj despite a bright start went for runs. Ravi Bishnoi was poor throughout the game while Avesh Khan once again had a poor outing. But in Ranchi, Deepak Chahar is likely to get the go ahead.

IND vs SA Live: Shubman Gill raises Ranchi temperature as he poses for a cool picture with Ishan Kishan & Shikhar Dhawan in the pool – Check Out

Deepak Chahar is still in contention as the replacement for Jasprit Bumrah in T20 World Cup squad. If Mohammed Shami is not fit enough by October 15, it is likely that Chahar will get the go-ahead. He has done enough to trump Mohammed Siraj but is still behind Shami.

As for the batting, India had a rare off day with Shikhar Dhawan and Shubman Gill both failing to fire. Ruturaj Gaikwad once again disappointed in India colours. Shreyas Iyer did well but would be disappointed not to see the game off. Sanju Samson played brilliantly but could not pace his game properly and ran out of partners in the end.

As for India’s batting, it didn’t work out against South Africa in the 1st ODI, but there is no reason to panic. Dhawan and Gill have rarely failed together. They are expected to hit the top gear on Sunday. However, time is running out for Ruturaj Gaikwad in Team India.

Despite his superb show in domestic cricket and IPL, he hasn’t quite left a mark in Team India in both T20 and ODI formats. In the 1st ODI, he scored just 19 off 42 balls, batting at No 3. He might get another chance in the 2nd ODI and he will have to deliver. Else, the SA series might see him go to a lengthy exile with Sanju Samson performing consistently.

Things went right down to the wire but it’s South Africa who win the first #INDvSA ODI.#TeamIndia will look to bounce back in the second ODI. 👍

In bowling department, Ravi Bishnoi had an off-day. He was the most expensive bowler, conceding 1/69 in his 8 overs. As he is in the T20 World Cup reserves, he is likely to get game time. But he too has to prove his worth with Kuldeep Yadav delivering. For him to be in the fray for ODI World Cup next year, every match will count.

However, the same may not be the case anymore for Avesh Khan. With Deepak Chahar back in action and Mukesh Kumar knocking at the door besides Shams Mulani, time is running out for Avesh Khan. He was promptly dropped from T20 squad following a disappointing Asia Cup campaign. In the first ODI, he gave away 51 runs without any wickets in his 8 overs. In all likelihood, he will be booted for Deepak Chahar in the Ranchi ODI.