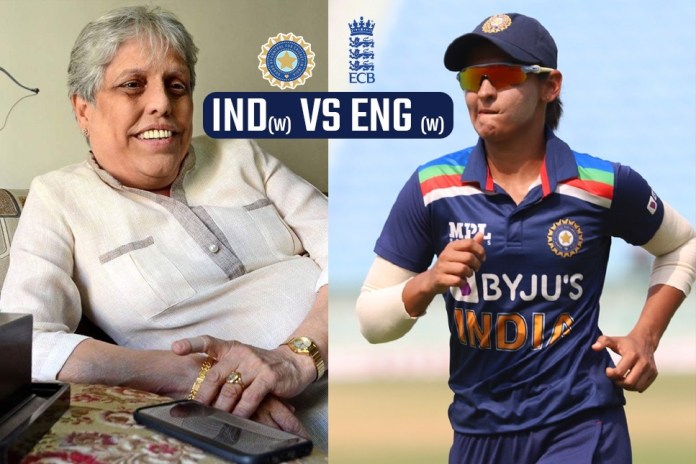 IND -W vs NZ-W: Time has come to drop Harmanpreet Kaur as she can’t survive on 171 scored in 2017 says Diana Edulji -Harmanpreet Kaur “can’t survive in the team” on the 171 she scored in the 2017 World Cup and it is time to drop her starting with the third ODI against New Zealand, said former India captain Diana Edulji. Edulji also wants to drop Shafali Verma for the next game with Smriti Mandhana expected to return after completing quarantine. In the star player’s absence, S Meghana has made an impact while Shafali continues to struggle in the 50-over format since making her debut last year.

Harmanpreet has made only two 50 plus scores since the 2017 World Cup in England where India reached the final. The 32-year-old had fitness issues last year but after an impressive WBBL, she was expected to replicate that performance at the highest level.

IND -W vs NZ-W: Time has come to drop Harmanpreet Kaur as she can’t survive on 171 scored in 2017 says Diana Edulji

“If you are going with the same yardstick which was used to drop Jemimah Rodrigues, what the coach (Ramesh Powar) had mentioned, the same yardstick should be applied to Harmanpreet,” Edulji told PTI.”I am very disappointed with her. She was my favourite player but you can’t survive on that one innings (171 against Australia in 2017). She is only one innings away from a big knock but the effort has to be there.

“Even on captaincy front, Smriti is the front runner for all formats after Mithali as Harman is not performing. I wouldn’t mind dropping her for the next game. Sneh Rana is a good replacement for her,” said the 66-year-old, who was a member of the Supreme Court-appointed committee that governed BCCI for 33 months.

Teen sensation Shafali averages 25 in eight games since making her debut in England last year. Two years into international cricket, the bowlers have found out the weakness in her game which is not allowing her to play freely. Edulji wants to work on
her game too. “Shafali needs a little rap on the knuckle, she needs proper grooming. She is moving towards the square leg and playing. There is no stillness in her stance. I can’t understand why.

“When she was scoring, there wasn’t this type of (trigger) movement. Bowlers have found her out and that is why she is moving away from the stumps to play her strokes. But you have to respect the bowlers at this level,” said Edulji.

IND -W vs NZ-W: Time has come to drop Harmanpreet Kaur as she can’t survive on 171 scored in 2017 says Diana Edulji

Indian spinners who have been the team’s strength for years are also not able provide breakthroughs in the current series. After managing to score 270, India failed to defend in the second ODI which is a big concern for Edulji.

“New Zealand batters are very good square of the wicket. Our spinners are not making them play on the front foot enough. They are very good on the back foot. Keep long on and long off, flight the ball more and make them come forward. “270 was a good score to defend and we should have defended. The fielding was sloppy too,” she added