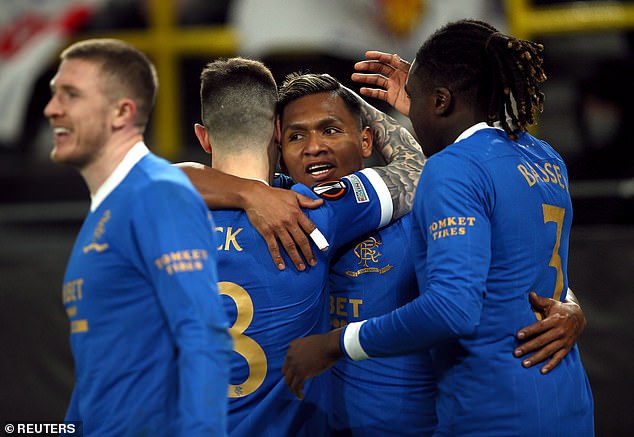 On a night when Germany was battered by Storm Ylenia, Rangers swept into the Signal Iduna Park Stadum and left the flimsy defences of Borussia Dortmund battered and broken.

Facing the team second in the Bundesliga in their own iconic home, this was a stunning night for Scotland’s champions.

Four goals in an astonishing 16-minute spell either side of half-time left the Ibrox side on the cusp of the Europa League last 16 for a third consecutive season.

They secured one of the finest results on foreign soil for a Scottish club in Europe in the process.

Leading 4-1 with eight minutes to play, a clobbering strike from Portuguese full-back Raphael Guerreiro offered Dortmund a chink of light before the second leg next Thursday.

If boy wonder striker Erling Haaland is back from injury, the German side will make all the right noises. They’ll say this tie isn’t dead and, thanks to that late goal, they might be right.

However, after shipping five goals at home to Bayer Leverkusen the other week, this Dortmund team look incapable of keeping wine gums from a toddler. Had they lost another five here they could have offered no complaint.

Central defender Dan-Axel Zagadou had a nightmare night, missing a sitter, conceding a penalty, scoring an own goal and earning a late booking.

A Rangers side missing the firepower of Fashion Sakala and Kemar Roofe for reasons yet to become clear will fancy themselves to score more goals in front of 50,000 fans in Glasgow.

If Dortmund defend as they did here, they can hardly miss. 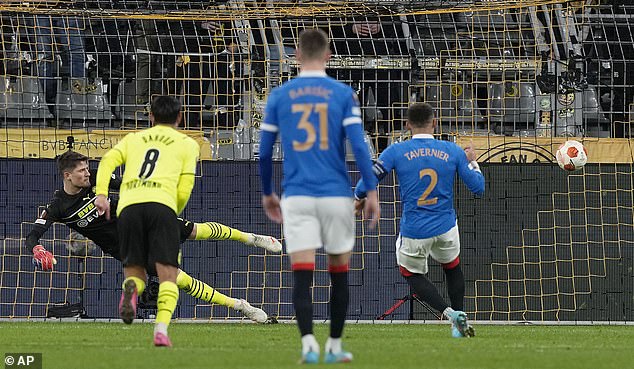 Under Steven Gerrard, the Ibrox team had some decent nights away from home against Benfica, Porto and Feyenoord.

Giovanni van Bronckhorst was a Rangers player the last time the club lost in Dortmund, in 1999-2000. This was a much happier experience for the Dutchman. The sound of 9,500 home fans booing their side off the pitch inside the 80,000-capacity venue was music to Rangers ears. This, surely, was the best away result by a Rangers team in Europe since a 3-0 win in Lyon in 2007.

Already knocked out of the German Cup by lower league St Pauli, Dortmund’s porous defending cost them big time here. The signs were there from the 10th minute when Borna Barisic missed a glorious chance to open the scoring after the home side’s back-line parted like the Red Sea.

With Ryan Kent taunting and tormenting his opponents, a James Tavernier penalty and a 41st-minute goal from the superb Alfredo Morelos put Rangers two ahead at the interval. A third from John Lundstram and an own goal from the hapless Zagadou placed them in a wonderful position to advance. 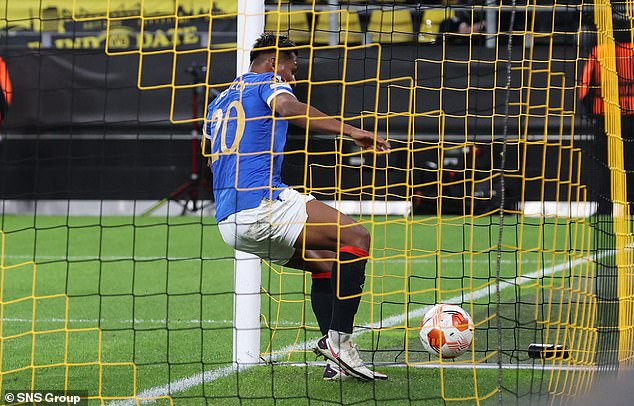 Dortmund had only themselves to blame for blowing some fine chances to grab a hold of the game in the first half.

Left completely unmarked from a corner after 15 minutes, Zagadou contrived to head an easy chance down and into the turf while Connor Goldson went walkabout.

Zagadou proved just as hopeless in his own penalty area when he conceded a needless penalty seven minutes before half-time.

There was no real claim from the Rangers players when the ball was swung into a crowded area. Play was moving back up the pitch when the Video Assistant advised French colleague Clement Turpin to check the monitor for a handball.

The check was swift and decisive. Captain Tavernier sent Gregor Kobel the wrong way, firing his spot-kick high to the keeper’s left and into the net.

Suddenly blue shirts surged forward at will. Morelos burst into the game when he won a corner with a low angled drive pushed round the post by the goalie. 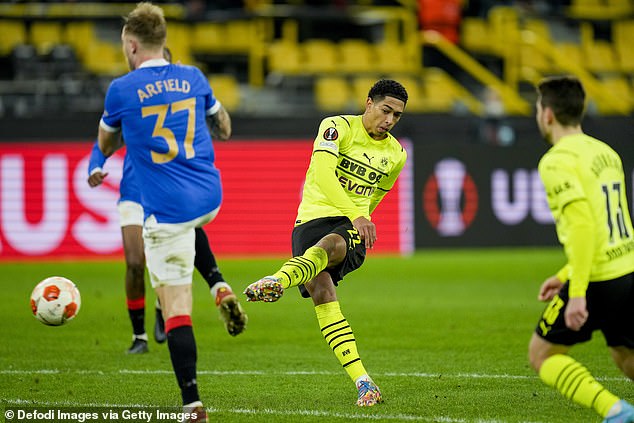 From Tavernier’s corner, Joe Aribo flicked the ball towards goal where shambolic defending failed to pick up Morelos’ back-post run. The Colombian was presented with a simple tap-in and, from nowhere, Rangers had scored twice in three minutes.

An unimpressive Dortmund could have no complaints. Another wasted opportunity before the half hour summed them up. Englishman Jude Bellingham found space on the left for a low cross into the danger area. Marco Reus – the main scoring threat in the absence of the injured Haaland – extended his foot to slot in before the ball was diverted away from his toes by team-mate Donyell Malen.

Two goals down – and yet to force Allan McGregor into a save – coach Marco Rose made a positive change at the interval. He had to. Belgian international midfielder Axel Witsel made way for Gio Reyna, son of former Rangers midfielder Claudio.

If he was going to ruin a very promising night for the Rangers manager after whom he was named, the young American needed to make quite the impression.

It was the visitors who were again to catch the eye, however. Within four minutes of the restart, Rangers sent their small band of 500 fans into ecstasy with a superb third goal.

Since signing from Sheffield United last summer, Lundstram has flattered to deceive and failed to justify his sizeable wage packet. There could be no quibble over the quality of the strike which fizzed into the corner of the net after brilliant wing play and an enticing lay-off from Kent. 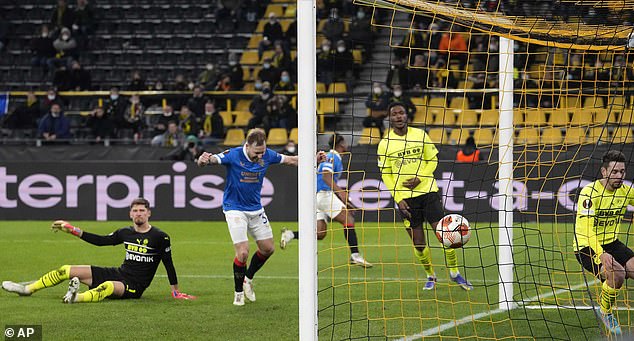 Rangers were finally given grounds for concern when Dortmund struck back inside two minutes. They cut out the over-elaboration and had a strike at goal. What a strike it was from Bellingham as well, the English teenager hauling his team off the canvas with a superb finish from 18 yards.

For the first time all night, the Rangers support fell quiet, fearing an improbable revival from the home team. They needn’t have worried. A Dortmund team which couldn’t stop a Downing Street knees-up were never likely to keep the back door closed.

For the second time in the game, VAR worked in favour of Rangers. On this occasion, a strike from Morelos bobbled off Zagadou and trickled into the corner of the net. At first, the goal seemed likely to be chalked off by an offside flag. The teams were preparing for a Dortmund free-kick when the referee took advice from the Video Assistant and over-turned the decision. It put the tin lid on Frenchman Zagadou’s night.

Winning 4-2 on German soil against the team chasing Bayern Munich could never be construed as a disappointing result exactly. Yet a thundering second goal for Dortmund eight minutes from the end from Guerreiro not only gave Allan McGregor no chance in his 100th European appearance. It might just offer the Bundesliga giants a glimmer of hope if Haaland is back for the second leg at Ibrox. A very slight one nonetheless on the evidence of a night when Rangers took them to the cleaners.