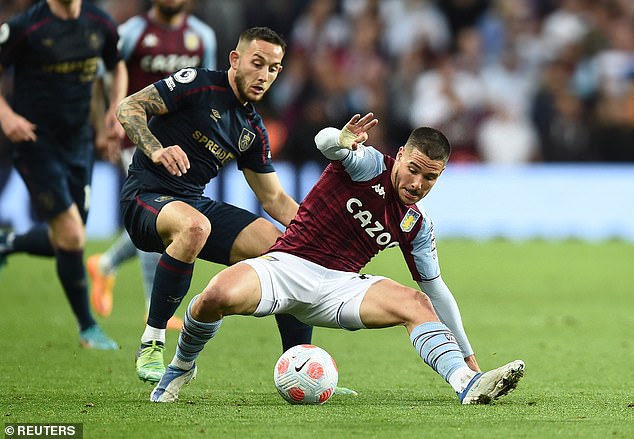 So, this is it, the final day of another season.

For all the highs and lows of the previous 37 games, plenty is coming down to the final 90 minutes.

Eight games – leaving out Southampton visit to Leicester and Chelsea hosting already-relegated Watford – are very much alive with a title race to finish, a top four spot to seal, relegation still looming large for two teams and Manchester United possibly finishing in the Europa Conference League.

There have been plenty of final day flurries in the top flight at both ends of the table but rarely has so much been undecided come the final day.

Tottenham hold the edge over Arsenal in the top four race but still need to avoid any complacency at Norwich, while Leeds know anything less than a win at Brentford may not be enough to keep them in the Premier League.

Having won 14 of their 18 home games so far this season, City will arrive at the Etihad Stadium on Sunday as overwhelming favourites.

The math is simple for Pep Guardiola and his players: win and they are champions. Draw or lose and the trophy is likely to be lifted by Jordan Henderson and Co up in Liverpool.

City hold a one-point lead and go into a game against a Villa side managed by former Liverpool captain Steven Gerrard, just to add another layer to the final day narrative.

Guardiola’s side ran out 2-1 winners when these sides met at Villa Park in early December, with goals from Portuguese pair Ruben Dias and Bernardo Silva. 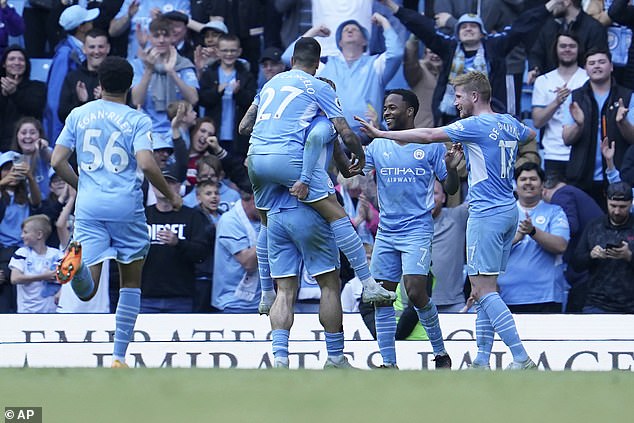 On their day Villa can be dangerous and Guardiola will be well aware of the dangers of complacency on a day that is set up to become the biggest of parties.

‘I encourage all the Blues in Manchester that day to go to the streets, the stadium, because they know we are going to give everything to win that game,’ he said in an impassioned plea to supporters last week.

‘They will be so proud, I’m pretty sure. I can assure you something. In one week our stadium will be sold out and we will give them all of our lives over 95 minutes and they will give us their lives.’

Man City win the title if:

The FA Cup and Carabao Cup winners are desperate to keep the Quadruple dream alive beyond 90 minutes against Wolves – but it is not in their hands.

Jurgen Klopp will likely bring back many of the players he took out against Southampton – he made nine changes for the 2-1 win at St Mary’s – and all he can ask of his players is to put maximum pressure on City by winning the game at Anfield.

Liverpool have the best home record in the league, going unbeaten in their 18 games at Anfield so far (14 wins and four draws).

Wolves have won eight of their 18 away games and the anticipation is they will offer little-to-no resistance against this Liverpool juggernaut – not that Klopp shares that level of optimism, mind you.

‘Wolves don’t come here and want to be part of our celebrations,’ he said on Friday.

‘They come here and want to get three points so we have to be ready for this game and not the other one [Champions League final].’

Liverpool win the title if: 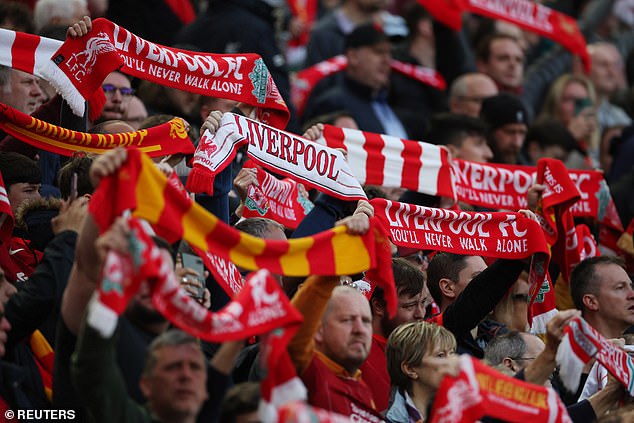 With three games remaining of the season, Tottenham were four points adrift of Arsenal and beginning to wonder if the top four race would even make it to the final day trip to Norwich.

Fast forward to a north London derby win and a nervy 1-0 victory over Burnley and all of a sudden, Tottenham are a win away from guaranteeing a Champions League spot.

Norwich have been relegated for some weeks now but will have plenty of professional pride to play for in front of their own fans.

The fact that Son Heung-min is chasing the Golden Boot – he is one behind Liverpool’s Mohamed Salah – means Tottenham should be right at it as they look to ensure they extinguish any hope down at Arsenal that this is still a race.

Tottenham are vastly superior in every single position but the jeopardy arrives in that Norwich have nothing to lose and can just throw caution to the wind for one last Premier League hurrah before they drop to the second tier.

Tottenham will finish fourth if: 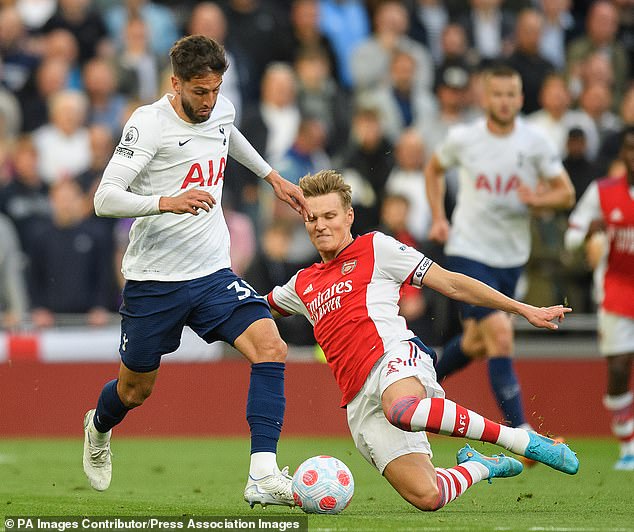 This was all set up to be in their hands.

And yet from the moment Rob Holding was given his marching orders in an abject north London derby display, Arsenal have looked like a heavyweight boxer on the ropes.

A dismal 2-0 defeat on Monday Night Football to Newcastle felt wholly predictable for a side that have had their mentality brought into sharp focus in this pursuit for the top four.

As mentioned, they were four points ahead with three games remaining and have then produced zero from the next available six.

With Everton having secured their survival against Crystal Palace on Thursday night – and the emotion that likely has taken out of them – Arsenal will be expected to finish this season on a high.

A win would at least put pressure on Tottenham in the off-chance that Norwich can pull out a wholly unexpected win at Carrow Road.

Arsenal will finish fourth if: 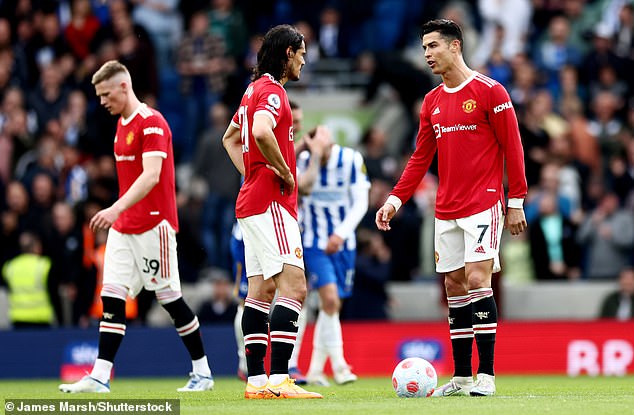 Not that Manchester United’s players should need any added incentive given as many as a dozen of them are under real scrutiny, but with new boss Erik ten Hag in the stands now is the time to put in a notable performance.

There haven’t been many of those for United in recent weeks – not notable in a good way, anyway.

If United fans need omens then here is a good one as they look to avoid dropping into the Europa Conference League.

Crystal Palace have never won in 12 Premier League games against United at Selhurst Park, drawing four and losing the other eight.

In Premier League history that is the most one team has faced another at home without ever winning a single game.

Whatever happens on the south coast, West Ham have had a brilliant campaign.

The highlight was undoubtedly reaching the Europa League semi-finals, where they lost out to eventual winners Eintracht Frankfurt.

Now David Moyes and his players will look to make an immediate return to that competition, even if it is in Manchester United’s hands.

Given the seasons both West Ham and Man United have had, it’s far from the most unrealistic of scenarios.

No glitz and glamour here but plenty on the line in terms of money, specifically the huge amount of cash for staying in the Premier League.

Burnley have had a dismal season which saw Sean Dyche binned as manager after 10 years in charge in a desperate late roll of the dice.

There was a mini-revival under the guidance of caretaker boss Mike Jackson and they go into a final home game of the season with destiny in their own hands.

‘That is what you want, you always want that,’ Jackson said following a 1-1 draw away at Aston Villa on Thursday. 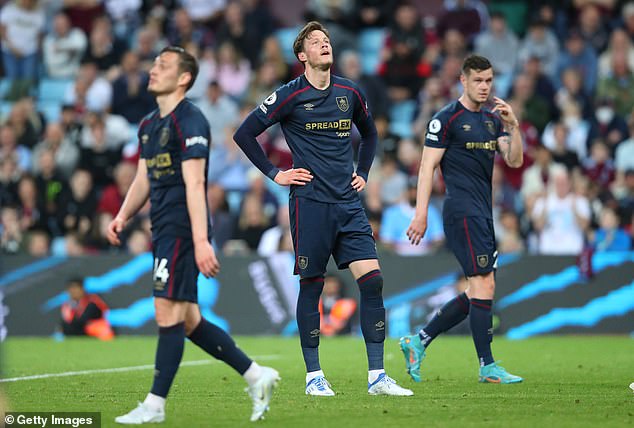 ‘We’re at home, it is in our hands but we know that there is a lot of hard work to go, 90 more minutes of work to achieve what we want to. That’s our goal, rest up now and get ready for Sunday.

‘Continue with what we have done today. Add that bit more quality with the ball but I think that will come, we have shown that before. Again, it is about that spirit now. It is there and it is about us focusing on the next game and attacking those moments.’

Newcastle won the reverse game 1-0 thanks to a Callum Wilson goal and it is expected to be an equally tense and fraught battle at Turf Moor. Win and they are safe. Draw and all eyes will switch to events in west London.

Burnley will stay up if:

It won’t be lost on Brentford boss Thomas Frank that he was the subject of taunts by Leeds’ players in 2020 when they won promotion at the expense of the Bees.

Stuart Dallas and Liam Cooper can both be seen chanting ‘mind the gap, Thomas Frank’ in a social media video. Now it is Frank who can put the nail in Leeds’ relegation coffin on Sunday.

Burnley will hope Frank and Brentford take it seriously given they need to get a result, if they are unable to beat Newcastle.

‘I think it’s very important to respect the league and try and do everything we can because if I was in that situation, I’d expect that from the other teams,’ said Frank.

So, not on the beach just yet. 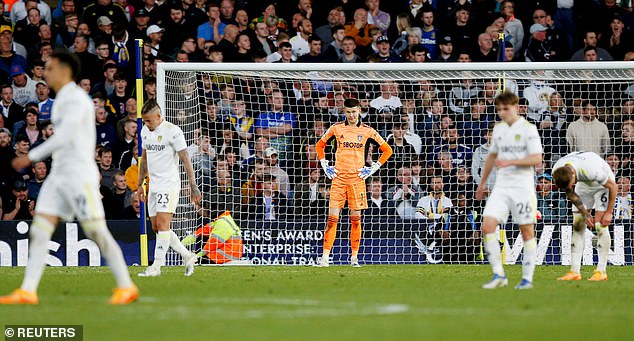 For Leeds, meanwhile, boss Jesse Marsch believes this is a final exam. Pascal Struijk rescued a stoppage-time point against Brighton to keep the Whites in contention, even if odds are against them.

‘We have focused on managing every match and focused on ourselves,’ Marsch told BBC’s Football Focus.

‘What I said to the team even now is we have had 11 trials through the process and now we take everything we have learned, good and bad, for a final exam. Now see if we can come out with 100%.

‘Can we come with 100% marks in every area and we can’t be afraid of that. We have to enjoy that challenge and be up for it.’

Leeds will stay up if: