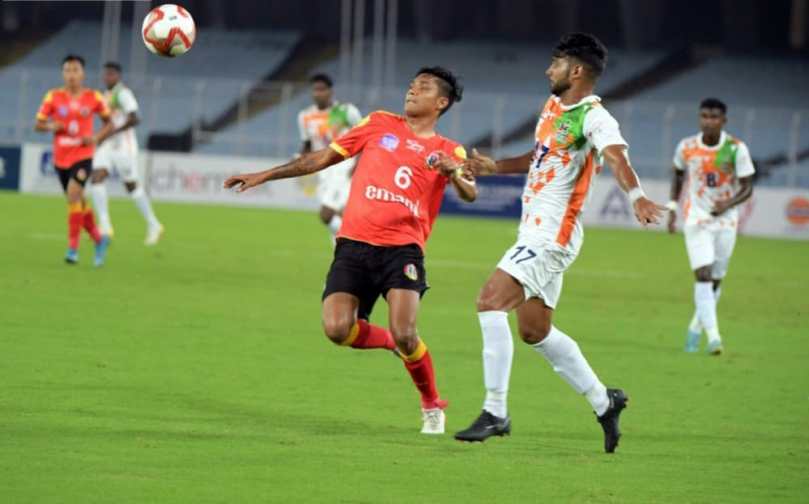 Playing its first match after Emami acquired the team, the red-and-gold brigade was dominating in the second-half but could not find the goal to break the stalemate.

Their best chance came in the 54th minute when captain Sumit Passi’s brilliant strike from 30 yards beat Navy keeper Vishnu but the ball ricochetted off after hitting the right bar.

Stephen Constantine, who was roped in as the head coach of the side, opted for a four-man midfield and an all Indian XI. The former India coach’s plans went haywire right at the start when Naorem Mahesh Singh picked up an injury in the eighth minute following a collision with the rival defender and had to be replaced by Tuhin Das.

But still, EB looked a better side even as the Navy men held on in the first 45 minutes. V P Suhair looked impressive and had a role in most of their attacks.

In the 17th minute, Suhair broke through inside the box and played it out wide off Tuhin, whose cross back, found Amarjit Kiyam in space, but the midfielder could not get the direction right.

Constantine brought in midfielder Souvik Chakrabarti and forward Mahitosh Roy in place of Angousana and Kiyam to introduce fresh legs in attack.

Just before the drinks break, Suhair, who had a brilliant second half from the right, found Sumit Passi’s run in the box with a wonderful defence splitting cross, but the striker hit straight at the keeper.

In the 82nd minute Tuhin set up an onrushing Suhair but his slide missed the ball.

With three minutes of regulation time remaining, Tuhin delivered another great cross but the header from Passi was saved by Vishnu.