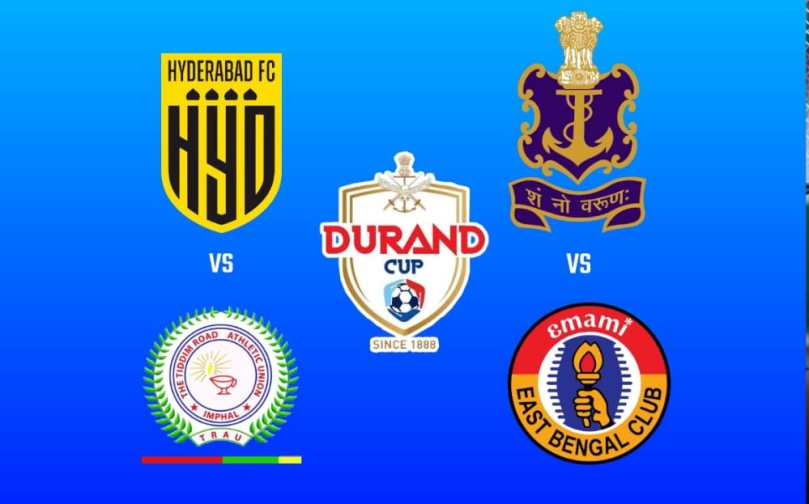 That will be followed in the evening by yet another first appearance, this time that of the local favourite Emami East Bengal, who come up against the Indian Navy Football Team in a Group B encounter at Kolkata’s Vivekananda Yuba Bharati Krirangan (VYBK).

The ISL champions are at full strength with their full quota of six foreigners including Brazilian Joao Victor, Australian Joel Chianese and the redoubtable Nigerian Bart Ogbeche, driving forces behind their epoch ISL triumph last season.

Spanish coach Manolo Marquez, chief architect of the triumph, has also organized a stout defence with India regulars like Sana Singh and Akash Mishra providing great attacking options on the overlap. Kattimani under the Hyderabad bar brought off the most number of saves among keepers last season.

Hyderabad as a result not only scored the most number of goals last season but were also second on the least conceded list behind Jamshedpur. It is a team that will take some beating.

Therefore if TRAU are harbouring hopes of a win and in football, it is justified that all do, they will have to look back at the intensity they displayed in the first half of their first game against arch-rivals Neroca FC, where they eventually went down 1-3, at the same venue four days back.

Coach Nandakumar Singh will have its hands full and even though players like Khanngam Horam Singh had a good game up front he will need more from forwards like Johnson Singh to support their captain Komron Tursunov. The Tajik was the only bright spot in that Neroca game. And of course, if they commit defensive blunders like the one leading to the third Neroca goal, they can rest assured that Hyderbabd will make them pay even more dearly.

The second game of Matchday 7 come Monday evening, pits local favourites Emami East Bengal against the Indian Navy Football Team, who play their second Group B game after having lost the first 1-4 to Mumbai City FC, despite scoring first in the game.

One got the feeling that the Navy team lacked belief in their first game. Coach Abhilash Nair will do well to instil that back as, if that Adersh Mattummal strike is any indication and given Emami East Bengal are really a brand new combination surely looking to settle down, this would be their best chance to spring a surprise. Some strategic changes like starting the experienced defender Dalraj Singh, barring injury concerns, would also help to attack better in set pieces given his height.

Group B is a strong group with ATK Mohun Bagan and Rajasthan United, the other two teams up next for them.
Coach Nair had this to say before the game, ” We do not know much about our opponents so there is a bit of the unknown factor but Stephen Constantine is their coach and he has very good experience of Indian football. Therefore we expect to come up against a strong team and they will also have their local fans for support. We are just concentrating on ensuring that we do not repeat the mistakes we made in the last game which led to us conceding some unnecessary goals. We will surely play to win.”

Emami East Bengal were the last team to complete their squad this season and that gives them the unknown factor. But as the Navy coach rightly pointed out, their coach Stephen Constantine does know how to get the best out of Indian footballers and it remains to be seen if he still has that touch. True to his committed nature, he was on the ground, watching the whole of the Mumbai City-Navy game and would have made notes.

The squad also does include players who can turn any game in Indian football on their day and have had consistent success over the years. Prime among them being V.P. Suhair, a mercurial forward. They have also roped in Aniket Jadhav and Sauvik Chakrabarti from Hyderabad, both of whom played their key roles in the triumph last season.

Emami East Bengal have also bolstered their squad with foreigners both in attack and defence according to credible news reports. The likes of Cyprus national team defender Charalambos Kyriakou and Spaniard Ivan Gonzales, who won the Cup with FC Goa in the previous edition, will surely lend solidity to the back line.

Then they have the three Brazilian recruits up front in Cleiton Silva, who had a stint with Bengaluru FC, Alex Lima formerly with Jamshedpur FC and Eliandro, a prolific scorer in the Thailand league over the last two years. If Constantine can get all of this to work as a unit, the Indian Navy could have a tough time.