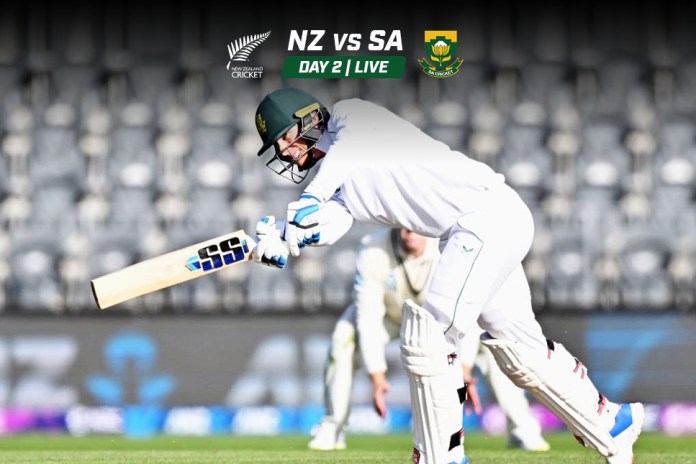 NZ vs SA LIVE, 2nd Test Day 2: Rassie van der Dussen and Temba Bavuma will resume proceedings for South Africa on Saturday as they look to pile on a huge first-innings total in the NZ vs SA 2nd Test at the Hagley Oval in Christchurch. The Proteas ended Day 1 on 238/3 courtesy of a century from Sarel Erwee, as they look to bounce back and clinch some important World Test Championship Points away from home. The holders meanwhile will hope to bounce back and take their chances and turn the tide in their favour. Follow Insidesport.in for all NZ vs SA LIVE updates.

A bold call by South Africa to bat first in the second Test against New Zealand paid dividends Friday with the tourists 238 for three, including a maiden century to Sarel Erwee, at stumps on day one. Erwee, in his second Test, headlined the scoreboard with 108, with 42 from Aiden Markram and 41 from Dean Elgar. Not out were Temba Bavuma on 22 and Rassie van der Dussen on 13. South Africa were 163 for one at tea before New Zealand claimed two wickets during the final session.

Erwee, who at 32 is a late arrival in the Test arena, started cautiously before opening up as a fine strokemaker with 14 fours from the 221 deliveries he faced. He shared in partnerships of 111 with Elgar and 88 with Markram but when Markram was dismissed Erwee followed three balls later.

The Proteas, trounced in the first Test and needing to win to save the series, surprised everyone when they won the toss and elected to bat at Hagley oval where the customary green-tinged wicket favours seamers on the opening day.

Elgar, the first captain to win the toss and not bowl in the 11-Test history at the Oval, justified his decision by saying he wanted his batters to “front up” after they folded for innings of 95 and 111 in the first Test.

He managed scores of one and nought, and Erwee 10 and nought in that Test and the pair responded positively in the second which began with Elgar sending the first ball of the day to the boundary. The surface was not as green as in the first Test and new ball bowlers Tim Southee and Matt Henry could not get the same movement through the air and off the surface.

It saw Elgar and Elwee post South Africa’s first century opening stand in 16 innings, and first away from home in a decade. While conditions were favourable for batting there was some assistance for the bowlers with Southee getting one delivery to swing sharply into Elgar then nip away to take the off-stump.

Other chances created by the bowlers tended to find an edge and fall short of the slip cordon until a brief period after tea. Markram looked set on 42 when he was lulled into a drive by Neil Wagner and nicked the off-cutter to Daryl Mitchell at first slip.

In the following over, Erwee’s attempt to drive Henry was edged to wicketkeeper Tom Blundell. New Zealand had 10 overs with the new ball with several unsuccessful appeals for lbw and Rassie van der Dussen was dropped on seven.

How To watch NZ vs SA Live Streaming in your country, India?
Fans from India can watch it live at Amazon Prime Video.