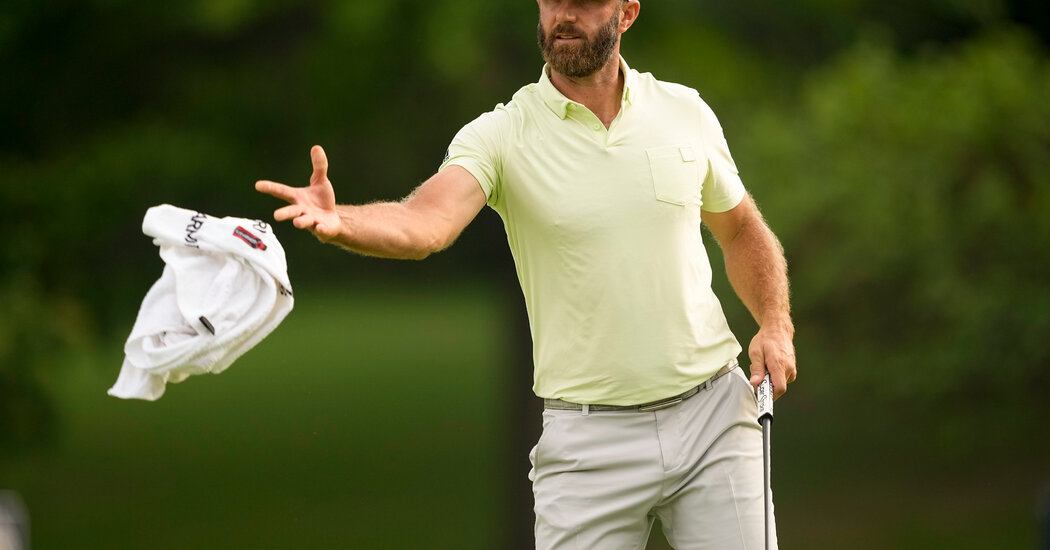 Dustin Johnson, who in February pledged his loyalty to the U.S.-based PGA Tour, will be the top-ranked golfer in the inaugural event of a Saudi-backed rival tour next week at the Centurion Golf Club outside London. Phil Mickelson, who recently expressed some measure of support for the alternative circuit, was not among those listed in the field for the tournament.

On Wednesday, Royal Bank of Canada decided to end its sponsorship contracts with Johnson and Graeme McDowell, first reported by Sportico. The bank is also the lead sponsor of a longtime PGA Tour event — Johnson won it in 2018 — that will be contested in Toronto on the same weekend as the first LIV Golf tournament.

Johnson, 37 and ranked 13th in the world, was one of 42 players listed in the field for the first event of the LIV Golf Invitational Series, whose major shareholder is the Public Investment Fund, the sovereign wealth fund of Saudi Arabia. The upstart league offers no-cut tournaments with $25 million in total prize money at each, and guarantees top players millions in appearance fees regardless of their performance.

The Telegraph in London reported on Wednesday that Johnson was paid about $125 million to play in the LIV Golf series.

Mickelson’s absence is a mild surprise, though there were still six spots available on Tuesday, so he could change his mind. Johnson’s inclusion is a breach in the broad solidarity expressed by the PGA Tour’s elite men’s golfers over the last six months.

Other players in the field were expected, with many — like Sergio Garcia, Lee Westwood, Richard Bland, Ian Poulter and McDowell — older than 40. Overall, while there are 16 players in next week’s LIV Golf field ranked in the top 100, only two — Johnson and Louis Oosthuizen — are ranked in the top 30.

The PGA Tour and the established European golf tour have denied releases for member golfers to play in LIV Golf, which is led by the retired major champion Greg Norman. PGA Tour officials have said that those playing in any of the breakaway circuit’s tournaments would risk punishment, which could include suspensions or a loss of tour membership.

Asked for a response following the decisions of multiple tour players to play in next week’s LIV Golf event, the PGA Tour on Wednesday reiterated its former stance on the matter.

“As communicated to our entire membership on May 10,” the tour said in a statement. “PGA Tour members have not been authorized to participate in the Saudi Golf League’s London event, under PGA Tour tournament regulations. members who violate the tournament regulations are subject to disciplinary action.”

The next step in the clash may be in court. PGA Tour Commissioner Jay Monahan has insisted that the tour’s lawyers believe any discipline handed to golfers who play for the rival tour will withstand legal scrutiny.

Johnson, a two-time major winner who has accumulated more than $74 million in career earnings from the PGA Tour, said in February that he was “fully committed to the PGA Tour.” It was a sentiment echoed by every player in the top 10, and each of the leading golfers in a younger cohort that has dominated the PGA Tour in the last two seasons.

Johnson’s agent, David Winkle, issued a statement on Tuesday night: “Dustin has been contemplating this opportunity off-and-on for the past couple of years. Ultimately, he decided it was in his and his family’s best interest to pursue it. Dustin has never had any issue with the PGA Tour and is grateful for all it has given him, but in the end felt this was too compelling to pass up.”

“Free agency has finally come to golf,” Norman said in a statement. “This is an opportunity to start a movement that will change the course of history by bringing new and open competition to the sport we all love. The desire shown by the players to participate in LIV Golf demonstrates their emphatic belief in our model and confidence in what we’re building for the future.”

The LIV Golf series includes eight events from June to October, including one in Thailand and five in the United States. In late July, the host site will be the Trump National Golf Club in Bedminster, N.J.

Saudi Arabia’s role in the new tour has already caused controversy. Mickelson set off a hailstorm of criticism in February after he acknowledged Saudi Arabia had a “horrible record on human rights” — including the murder of a Washington Post journalist — but said he viewed the new tour as a “once-in-a-lifetime opportunity” to apply pressure on the PGA Tour to increase player revenues. Mickelson later said his remarks had been “reckless.”