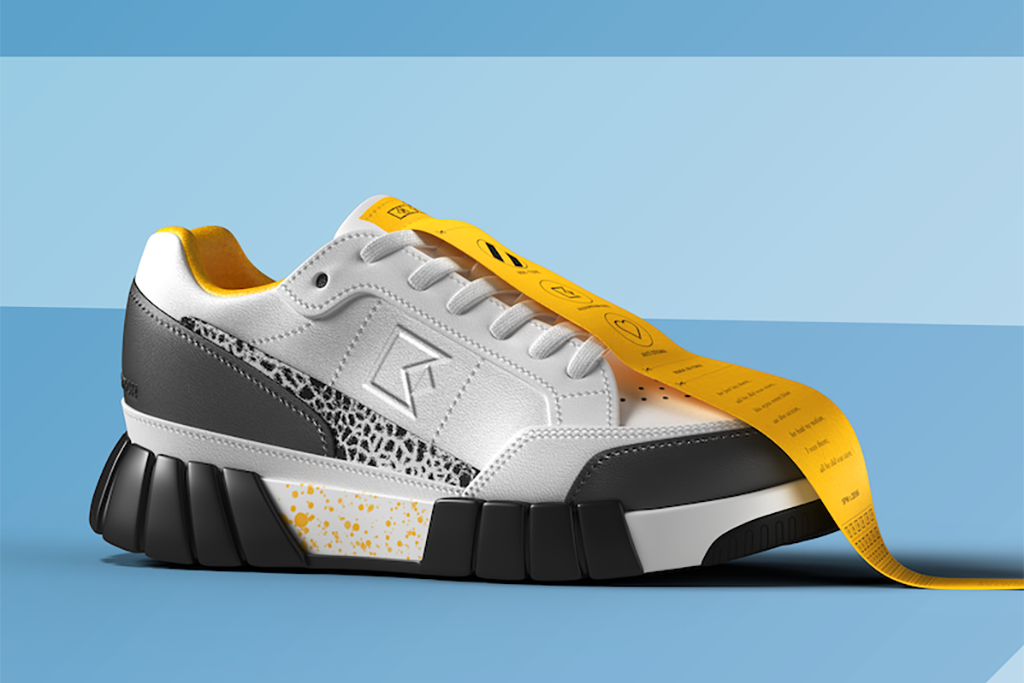 Digital fashion and art collective EBIT (Enjoy Being in Transition) has launched its first virtual-only footwear collection in the metaverse.

Co-founded by Simon Whitehouse, the former CEO of JW Anderson, EBIT aims to shine a spotlight on promoting mental health through art, fashion, and music. And as May is Mental Health Awareness Month, this launch is situated to do just that.

Launching today, EBIT has unveiled the “Spectrum of Footwear [E010]” collection – a debut range of 10 metaverse-ready digital shoes and sneakers that draw inspiration from the spectrum of mental health conditions. According to Whitehouse, elements of each style morph and sequentially overlap, subliminally harkening back to how medical professionals diagnose mental illness.

“I remember selling footwear 25 years ago, and the classifications were very straightforward,” Whitehouse told FN on a call on Wednesday. “There was a shoe, a sneaker, a boot, etc. Now, there is so much crossover and hybrid models that have evolved over the years. This footwear evolution parallels with how science and doctors diagnose mental health patents. Individuals are no longer labeled with one diagnosis like depression and ADHD, they’re now treated across a spectrum. Hence why we called this collection a ‘Spectrum of Footwear.’”

An example on how the NFT morphs includes a token that starts out as a 1980s-inspired sling-back mule that changes into a flat grain leather low top, then into a classic basketball high top sneaker, before morphing into Chelsea boots, a clog, and back to the mule. According to Whitehouse, each style is equipped with 69cm signature EBIT label which contains subtle references to morality, mental health and youth culture.

Designed by Dominic Laurelli, the range of ten virtual-only, game-ready 3D designed shoes can be worn by a user’s avatar in the metaverse. According to Whitehouse, the rendering and NFT assets were created by Amsterdam-based fashion CGI specialists INDG in partnership with Bastiaan Geluk, Markus Bauer, Nick Hussain and Ben Mahon. Digital product development was led by Jaime Galipienso, with Didac Albors and Joseto Garcia.

The styles will be available to purchase as NFTs via a special collaboration with The Dematerialised marketplace on the Lukso blockchain. An auction of one 1-of-1 NFT will take place today, while the other 9 styles will be produced in varying quantities up to 50 units. Each NFT will be priced by scarcity. No physical product will be available for purchase, but sales from EBIT’s Spectrum of Footwear NFT collection will go to the National Autistic Society, Whitehouse added.