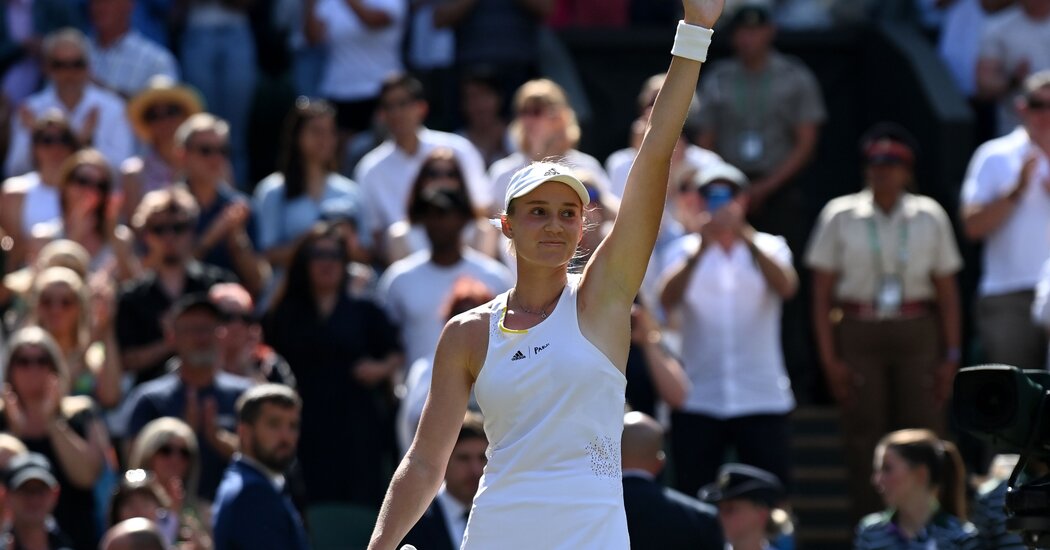 Rybakina, who began representing Kazakhstan four years ago after the former Soviet republic agreed to fund her career, overpowered Jabeur, who faltered and succumbed to inconsistency after taking an early lead.

Rybakina, 23, was nervous and shaky early on, missing seemingly easy rally balls long and struggling to get her dangerous first serve into the court, but she settled down as the match stretched on. Once she found her rhythm, Jabeur had few answers. She had a chance to draw even in the third set as Rybakina fell behind 0-40 serving at 3-2, but Jabeur couldn’t finish the game and Rybakina cruised over the finish line from there.

On the final point, Rybakina watched Jabeur, the No. 2 ranked player in the world, send one last backhand return wide and strutted to the net with barely a celebration. A few minutes later she climbed the stairs to her box to embrace her team.

It was Rybakina’s first Grand Slam title and the first for a single’s player representing Kazakhstan, which has recruited several men and women from Russia to represent it in tennis in the last 15 years, financing their development as part of an effort to make the country more appealing to the West.

It was a match that was never going to lack for a story no matter who won.

Jabeur, a 27-year-old from Tunisia, was the first Arab and the first African woman to reach the Wimbledon final, and the first Arab woman to make any Grand Slam final. She is Muslim and the match fell on, Eid al-Adha — the feast of the sacrifice. The holiday commemorates the story of Allah asking Abraham to sacrifice his son, as a sign of faith.

There was a time when it seemed like every year an American would play for this championship on July 4. But the sport and its calendar have shifted. The Wimbledon final happens a week later, and American players, and those from every other country that dominated tennis for most of the last 100 years, face far more competition from places where the sport has only recently taken hold.

“I feel really sad, but it’s tennis. There is only one winner,” Jabeur said while holding the runner-up trophy. “I’m trying to inspire many generations for my country.”

Rybakina told the Centre Court crowd that it had been an honor to play in front of the royal box. She also thanked Bulat Utemuratov, the billionaire who is the president of the Kazakhstan Tennis federation for believing in her.

“I never felt anything like this,” she said, with Kate, the Duchess of Cambridge, standing a few feet away. Prince William did not attend the match. Kate was accompanied onto the court by Ian Hewitt, the chairman of the All England Club, and the man in charge of explaining the decision to bar Russian and Belarusian players back in April.

Rybakina, the 23rd-ranked player in the world, had never before this week advanced past the quarterfinal of a Grand Slam tournament. Tall and long and powerful with one of the most dangerous serves in the game, she was born in Russia and lived there until she became an adult. Her parents still live in Russia.

After turning 18, she accepted an opportunity to receive funding for her tennis career from Kazakhstan. She represented Kazakhstan at the Olympics in Tokyo last year.

Her run to the final made for an awkward tournament, bringing politics into the fray after tournament organizers had tried to keep them at bay by barring Russian and Belarusian player because of Russia’s invasion of Ukraine.

Organizers made the move at the behest of the British government and the royal family. The Duchess of Cambridge traditionally hands the trophy to the winner of Wimbledon. Few in Britain wanted to see her giving it to a Russian while Britain has been among the leaders in providing aid and weapons to Ukraine.

On the court, Jabeur and Rybakina also promised one of the sport’s ultimate contrasts in styles. Jabeur’s name rarely is mentioned without “crafty” following it a few words later. Her game is filled with just about every kind of tennis shot there is.

At any moment, she can cut the ball on an angle and with a spin that makes it knuckle as it clears the net and finds the unguarded area of the court or smack a forehand down the line. Tennis, for her, is a profession and a sport but also a game and a means to express her innate creativity.

The question was whether Rybakina would give Jabeur the chance to hit her shots or whether the power of her serve and her slingshot strokes would hit Jabeur off the court.

Early on, finesse prevailed over power. Jabeur drew first blood, forcing a nervy Rybakina to hit from deep in the court. Rybakina struggled with her forehand as Jabeur danced across the grass showing off the array of her arsenal. In the fourth game, she cut one of her signature slicing backhands past Rybakina, who had closed in at the net. A game later, she jumped on a second serve and sent a searing forehand that had Rybakina backpedaling.

Jabeur is not a fist-pumper, but when she likes a winner she has just hit, especially one on the move, she jogs across the grass like a basketball player who has just sunk a three pointer. She did a lot of jogging in the first set, which she won when Rybakina sent a forehand into the middle of the net.

Jabeur rarely plays complete matches, though, even when she appears headed for a quick afternoon. Especially in pressure situations, there is often a wobble, sometimes a fatal one, and it arrived early in the second set on Saturday.

Whether the idea of being a set away from becoming Wimbledon champion suddenly seemed too big only she knows. But in an instant, the ease and steadiness that she had displayed in the first set disappeared.

Rybakina broke Jabeur’s serve in the first game of the second set, and Jabeur never truly recovered. She tried to lighten the atmosphere, heading one errant ball to a ballboy at the end of a game and trying a between-the-legs shot while chasing a lob, but she grew more erratic as the set wore on.

Rybakina, meanwhile, shook off her early jitters. She began to fire her first serve. Forehands that had sailed long at the beginning began diving into the corners and hitting the edges of the lines. She charged the net to close out points, and sealed the set with an ace that Jabeur could only stare at.

The third set brought more of the same, even as the crowd roared each time she began a service game, and when she got three chances to even the set midway through, desperately trying to lift her and keep the Duchess sitting in the front row of the royal box in the brightest yellow dress in all of Centre Court from her starring role in the oddest of post-match trophy ceremonies.

But nothing was going to stop Rybakina this year at Wimbledon: not Jabeur, not the crowd and not even an edict from the government to keep players from Russia from participating.