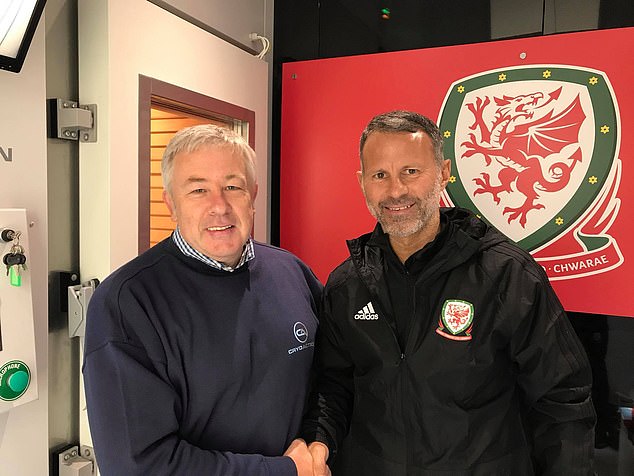 The director of a cryotherapy firm used by international and Premier League football teams was sacked after a cryo-chamber he installed leaked dangerous gases which ‘could have led to fatalities’, an employment tribunal heard.

David Morris stepped in to fit one of the £80,000 chambers as the company’s engineer was unavailable.

But a potentially dangerous leak was found days later which might have killed someone using the hi-tech equipment, the tribunal heard.

David Morris, left, pictured with former Wales Manager Ryan Giggs was threatened with dismissal over claims he had negligently installed a camera system alongside the high tec Cryo Chamber. Mr Morris said he had rang the company’s engineer during the instillation to ensure everything was up to standard 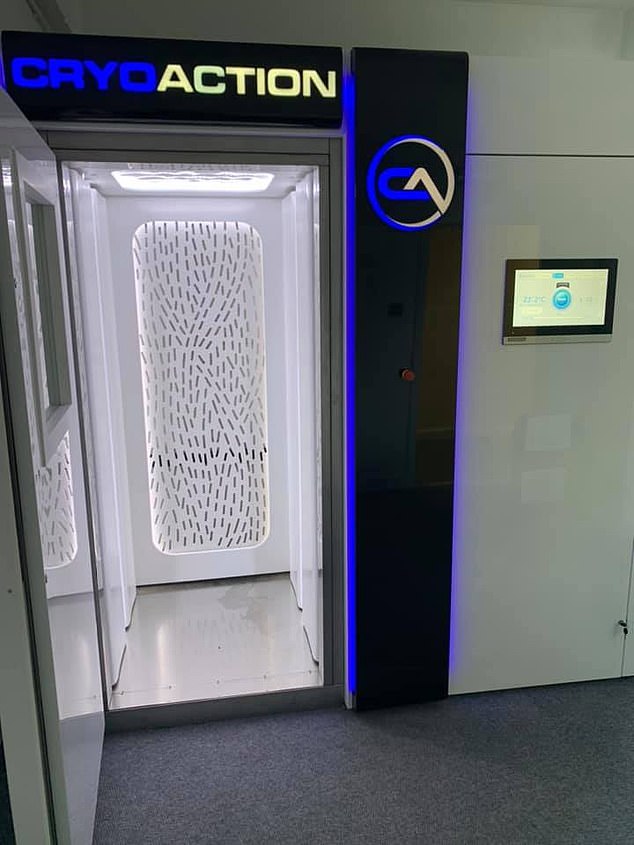 The £80,000 machines are used by a string of Premier League football clubs including Arsenal 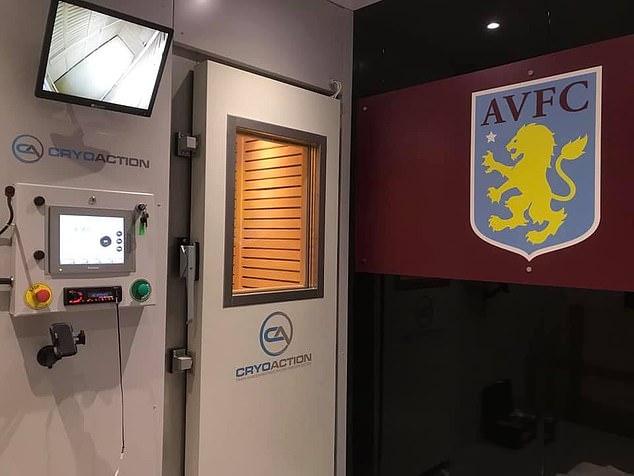 The 55 year old, whose LinkedIn profile pictures him with high profile customers such as Wales star Gareth Bale, was later sacked by CryoAction – a company he co-founded – for fitting the device despite ‘not being a qualified engineer’.

However, the tribunal ruled in his favour after concluding employees including the company’s principal health and safety officer were aware he was undertaking the work but said nothing against it.

Mr Morris’ claims of unfair and wrongful dismissal both succeeded, and he is now in line for compensation.

Cryotherapy involves the use of extremely cold temperatures to combat injuries or disease, and is widely used to treat soft tissue injuries.

The tribunal heard Mr Morris founded London-based CryoAction in 2015 with Ian Saunders, also 55, and both served as equal shareholders and company directors.

The remote hearing was told the company’s cryotherapy chambers feature an ‘actuator’ which operates as a ‘safety valve’ for the ‘dangerous’ liquid nitrogen – which displaces oxygen as it expands and can lead to asphyxiation.

Prior to 2019, the tribunal heard both Mr Morris and Mr Saunders would ‘on occasions’ undertake some technical work in installing and repairing the chambers.

However, in January 2019 the company hired a Technical Director – Shaun Turton – who was responsible for the ‘engineering function’ across the company.

The panel was told the appointment was a result of a customer receiving a ‘full refund’ of some ‘£79,000’ after a chamber was installed incorrectly.

The tribunal heard that, though Mr Turton had installed ‘all bar one’ of the eight chamber installations from March 2019 onwards, the one he didn’t install was fitted by Mr Morris in Glasgow at the end of January 2020. 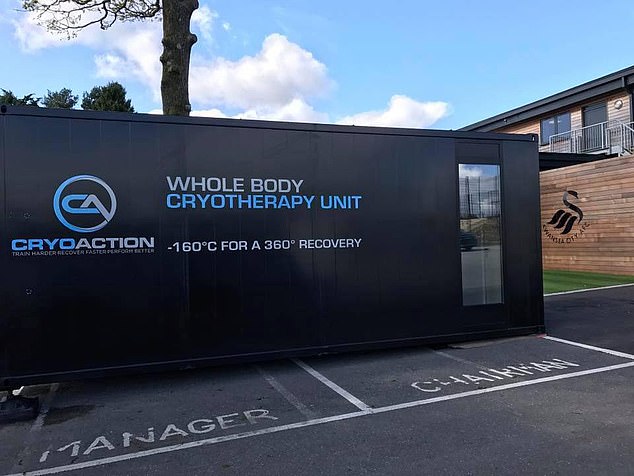 CryoAction claimed Mr Morris was negligent when installing a unit in Glasgow, though the Employment Appeals Tribunal accepted the company director had sought appropriate technical advice when fitting the equipment

A liquid nitrogen tank was then installed by a third party company following its delivery, and the final ‘commissioning’ of the entire unit was arranged for January 31.

The tribunal heard Mr Morris messaged Mr Turton – who was also the company’s principal health and safety officer – to say he would fix the ‘actuator cable’ on the date, as Mr Turton wasn’t available.

He also informed colleagues in Poland he would be doing the work. Mr Morris called Mr Turton for advice when installing the chamber, and was successful in connecting it.

In mid-February, however, CryoAction were told by the company which went to refill the liquid nitrogen tank they had noticed ‘a discharge of gas’ from a pipe within the chamber room. The tribunal heard the system was immediately shut down on the advice of Mr Turton, and Mr Morris was later suspended whilst on leave when Mr Saunders returned from a business trip to France.

He was also removed from work group chats on WhatsApp, and the keys to the company’s offices were changed before he returned from leave.

Mr Morris was dismissed for gross misconduct relating to his installation of the Glasgow chamber because he was ‘not competent’ to take on the work as someone who was ‘not a qualified engineer’.

The allegations also stated: ‘Your deliberate actions could have not only resulted in fatalities but could have also had serious consequences for the company in damaging its reputation beyond repair.’

Mr Morris appealed against his dismissal, arguing the decision to sack him had been ‘prejudged’ and complaining Mr Saunders and his wife should not have been involved in the disciplinary process due to their ‘conflict of interest’ as shareholders.

Employment Judge Stephen Jenkins ruled Mr Morris was ‘competent’ enough to install the chamber, and argued if other members of staff had concerns about the ‘safety’ of Mr Morris’ work they would have raised it.

Judge Jenkins said: ‘CryoAction had considered that Mr Morris had committed acts of gross misconduct, [but] I have concluded that that conclusion was unreasonable in the circumstances.

‘Mr Turton confirmed, from his perspective of being the [company]’s principal health and safety officer, that had he had any concern about the safety of the work being undertaken then he would have raised it.

‘Mr Morris did seek the telephone assistance of Mr Turton and, as I have already noted, Mr Turton did not, at any stage, indicate any concern about Mr Morris doing the work.

‘It seemed clear that Mr Morris was competent to undertake the work – which was very straightforward.

‘The unit had been manufactured in Poland and had been checked there before dispatch… the pipework and valves had subsequently been installed.

‘All that was then left was the final commissioning of the equipment.’

Mr Morris’ claims of unfair and wrongful dismissal were successful, and a remedy hearing will take place to decide upon compensation. Other claims of breach of contract, unauthorised deductions from wages, failure to pay holiday pay, failure to provide a statement of particulars of employment and failure to provide itemised payslips all failed.

A company spokesperson for CryoAction said in a statement: ‘Policies and procedures have been altered as a result of the ruling.

‘Safety is our primary concern and any transgression of safety principles will not be tolerated within our company.

‘Naturally, we are disappointed with the tribunal’s outcome.’

The term comes from the Greek language, which translates to ‘cold cure’.

These icy techniques have been around for ages, dating back to the 17th century.

Athletes have long submerged themselves in baths of ice or used ice packs for recovery and to help numb pain.

Whole body cryotherapy was originally developed for the treatment of rheumatoid arthritis in Japan in 1978.

The cold temperatures boost blood flow to vital organs in an attempt to regulate temperature. When this nutrient and oxygen-rich blood flows back to the skin, it’s said to speed up the renvewal of skin cells and tissues.

It’s also said to stimulate the lymphatic system to flush out toxins and promote a faster turnover of skin cells.

Anti-inflammatory effects can also help to soothe certain skin conditions such as psoriasis and eczema.