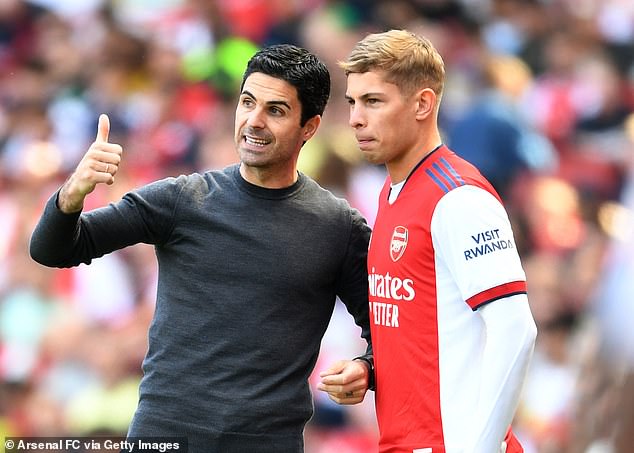 There is a decent chance that Emile Smith Rowe will end this 10-day tour of the US without having played much football.

He missed victory over Everton in Baltimore with a thigh issue that will also likely keep him out of Wednesday’s friendly with Orlando City. Time will tell if he can make Saturday’s closing party against Chelsea.

Whatever happens, however, Smith Rowe will return to London having had his adrenaline fix. Having ticked another box off the list: on Thursday, he is among the Arsenal contingent heading to Universal Orlando.

‘I can’t wait,’ the 21-year-old says. ‘I grew up in Croydon, I’ve been to Chessington World of Adventures, Thorpe Park and Alton Towers. I love it.’

Arsenal’s camp in Germany earlier this month served a useful purpose as he enjoyed his first 45 minutes of the season against Nurnberg. He saw another side to boss Mikel Arteta, too.

‘I really like bowling. We went in Germany and I won,’ Smith Rowe says. ‘Me and the gaffer were going head to head because we were on the lanes next to each other. I was surprised, to be fair, to see how competitive he was.’ Arteta was even trash-talking his No 10. ‘It was funny,’ he adds. 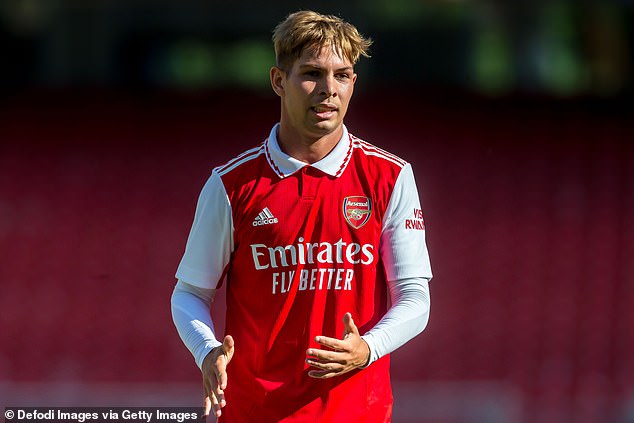 Those extra-curricular hobbies — bowling, table tennis and cinema — came in handy as injury and illness disrupted his progress last season.

‘I have good people around me… they always keep me happy and I just like to spend time with them when I do go through these hard times,’ he explains. ‘I’m quite strong in the head so I never really let the injuries get to me.’

This latest setback comes at the end of an undulating 12 months that began with such promise. A year ago this week, Smith Rowe signed a new long-term deal, taking the No 10 shirt. Four months later came a first England cap. ‘I can obviously be proud of myself and I can be happy with it. But at the same time, I’ve been unfortunate.’

Time is nigh for his luck to turn. ‘I think it’s every kid’s dream to play in a World Cup,’ Smith Rowe says.

So is making England’s squad for Qatar a realistic target? ‘Yeah, of course,’ the midfielder adds. ‘When I do come back, hopefully I can get as many minutes as possible to show what I can do. And then we’ll see.’ 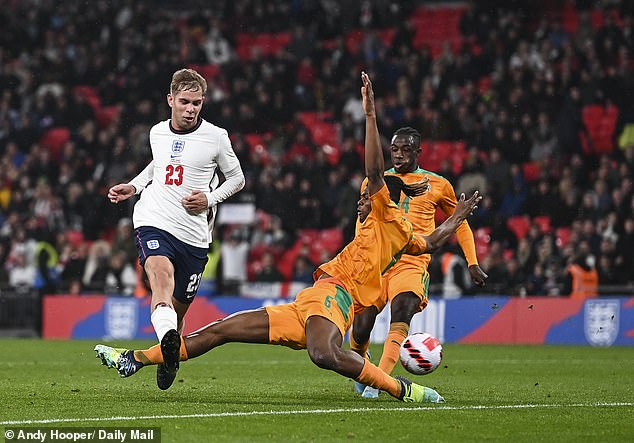 Competition for both club and country has rarely been greater. Arsenal have added attacking reinforcements including Gabriel Jesus and Fabio Vieira. And Smith Rowe has pinpointed one area where he must progress: ‘I didn’t really get many assists last season’.

Just two, in fact. ‘That is one factor I am going to try and improve this season.’ But how can he do that while injured?

‘Studying, watching games and clips,’ he explains. ‘Seeing where I should have passed it, or the timing of my passes, and where I can create more chances. Obviously not just me, watching other players in the league as well.’ 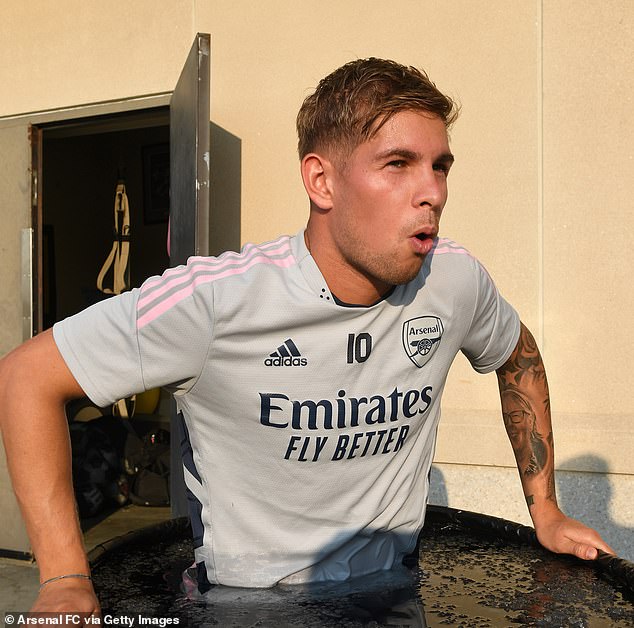 Last season, Smith Rowe’s rise to the England fold was fuelled by a change in lifestyle — Arsenal provided a personal chef as he did away with Nando’s, takeaways and his mum’s cooking. Safe to say he hasn’t been eating out in the US.

‘No chance,’ the 21-year-old laughs. At home, meanwhile, Domino’s Pizza — an old favourite — is off limits.

His guilty pleasure now? ‘Normally after games if we have a day off, I have quite a lot of chocolate,’ he admits. ‘I keep that quiet.’

Food is proving a crucial part of this tour. Arsenal have introduced a ‘roulette’ system that means players and staff mix on different tables for each meal. 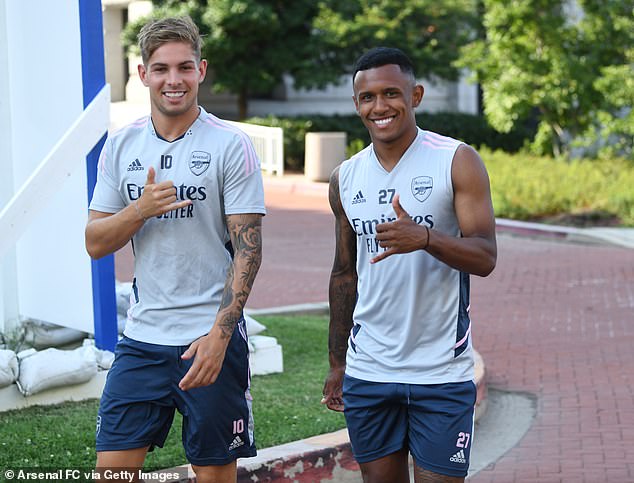 Smith Rowe says that Arsenal’s new signing, such as Marquinhos, have settled in well

Every little helps — especially with new faces. ‘Jesus and Vieira have settled in really well,’ Smith Rowe says. ‘The manager told us from the start that we need to become a family as soon as the new players come in.’

But if he could choose to sit next to anyone? ‘Marquinhos,’ Smith Rowe says. The 19-year-old forward is another recent arrival, from Sao Paulo.

‘His English is not great but I’m teaching him a little bit.’ Rude words, presumably? ‘Nah, the good English! He’s a funny guy.’

Marquinhos is among four Brazilians in the Arsenal squad. ‘Good competition’ for Smith Rowe and the other academy graduates. ‘We’re getting outnumbered now,’ he jokes. ‘We’re trying to reclaim it! But the Brazilians are good — they’re funny, they’re loud.’ 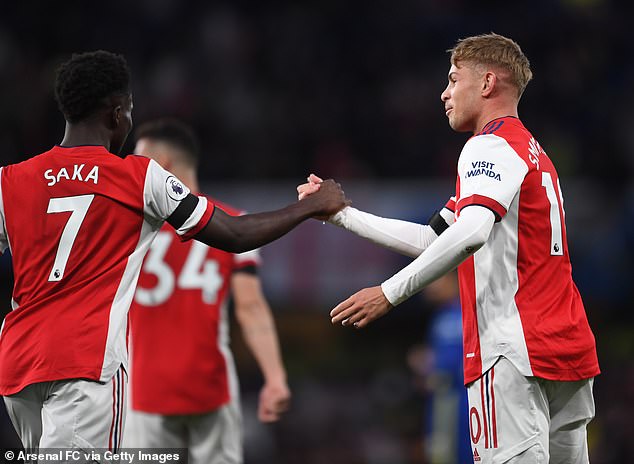 Off the pitch, Smith Rowe hopes to sample some of their culture as, on it, Arsenal push for a Champions League return after last year’s near miss.

Crucial to their hopes is Bukayo Saka, whose star continues to rise, even after racist abuse followed his Euro 2020 penalty heartache.

‘I’ve grown up with him, I’ve known him for a long time. So for him to come through it, it’s no surprise to see how strong he is,’ Smith Rowe says. ‘At such a young age, his maturity is ridiculous. I’m happy for him and long may it continue.’