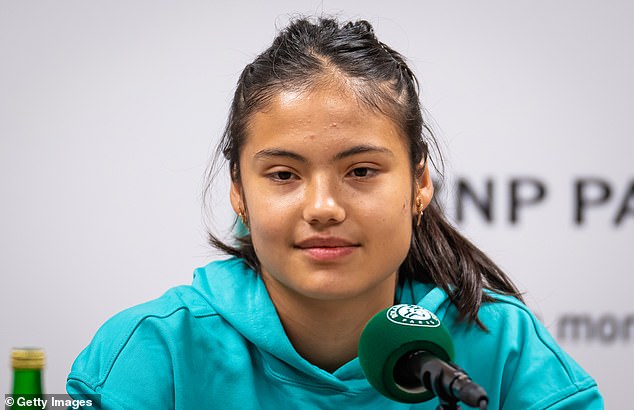 Emma In Paris over the next week will be the sequel to an episode from four years ago that sank without trace.

It was in 2018 that Emma Raducanu made her one previous appearance at Roland Garros, as an unknown 15 year-old who lost in the second round of the junior tournament on an outside court.

Now the Flushing Meadows champion, she is back to play the senior French Open for the first time, another illustration that there is still plenty of catching up going on.

This fortnight signifies that the end of her freshers’ year on tour is nearly over. Once she gets to Wimbledon she will start returning to big events for a second time.

The biggest single deficit she has to make up is in the area of physical development, which has seen her repeatedly struggle to complete matches without the assistance of the physio being called on court.

It was likely to be this way for someone who spent a lot of time studying while most in her tennis peer group were training almost flat out for much of their teens.

Therefore it is surprising that she has yet to assemble a fixed team around her of a full-time trainer and physio. She is hardly unable to afford it.

This is actually more surprising than the issue which draws far more attention – her tendency to mix and match coaching expertise, an area much more subject to personal preference. 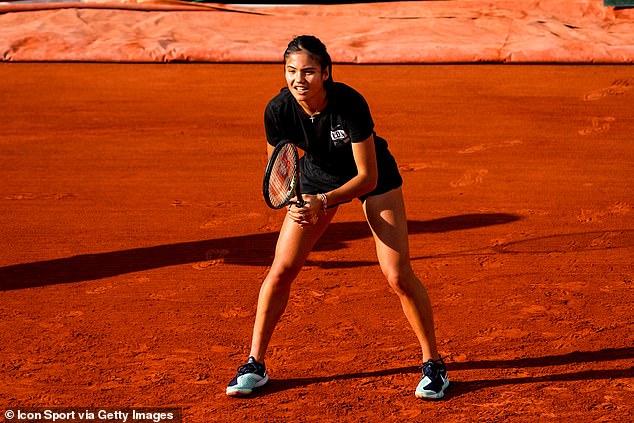 While pronouncing herself fit, following her retirement from the Italian Open first round, Raducanu stated that she was making progress in getting a more settled support team to aid her physical development.

‘I am putting together something, figuring out what works physically, because that is obviously an element of my game that needs to be looked at,’ she said.

‘The last few days maybe after the back (injury) I have definitely been increasing my gym work and I have been doing a lot more.

‘I think it’s something I’m definitely learning to enjoy with each bit that I do. I kind of get that positive reinforcement and I feel really good about myself.

‘It’s something that I think helps you mentally as well if you know you’ve definitely put the work in,’ added Raducanu, who has been focussing on her core. 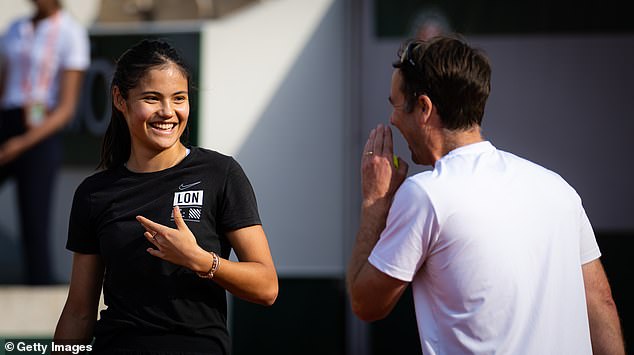 Iain Bates, head of women’s tennis at the Lawn Tennis Association, is with Raducanu in Paris

‘I’m going to be out there, I am going to outlast or be fitter than my opponent on the other side of the court. It’s definitely something that I want to continue.’

The set-up around her continues to change on an almost weekly basis. In Paris she has a combination of Iain Bates, head of the women’s department at the Lawn Tennis Association, the return of occasional hitting partner Raymond Sarmiento (an American pro) and back on duty is physio Will Herbert, who has intermittently assisted her since the US Open.

Expected to be around is veteran coach Louis Cayer, the LTA’s doubles guru and a renowned stroke technician who helped her in the earlier part of the clay season.

It is certainly an unusual approach compared to how most players like to operate, yet this first season on the terracotta dirt courts of Europe has been promising enough, yielding five wins and four defeats. One loss was an injury retirement, another was a highly competitive match against the near unbeatable Iga Swiatek.

‘I have definitely learnt that I can kind of adapt to this surface much faster than I probably thought, and learnt about how to stay in the point. When to play with spin and when to actually hit it hard. You don’t have to always just grind it out. Sometimes you can put your hard court game on a clay court.

‘I think my movement in defence has improved as well. To be honest, I’m enjoying it more than I thought I would. At the beginning I was, “Oh, it’s a clay court, just have a go.” But now I really believe that I can be good.’

She will face 17 year-old Czech qualifier Linda Noskova in the first round.