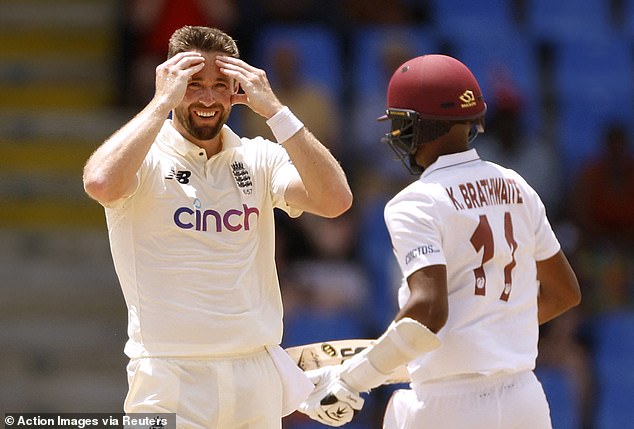 Centurion Jonny Bairstow guided England past 300 for the first time since last summer before being last man out on the second morning of the first Test against the West Indies.

Joe Root’s side last hit that mark seven months and 13 innings ago against India at Headingley, failing in each of their 10 attempts in the Ashes. Perhaps not coincidentally, that game in Leeds was also England’s last Test win.

England resumed on 268 for six and finished all out for 311 with the West Indies openers breezily negotiating 10 overs before lunch to reach 44 without loss.

Bairstow scored 31 of England’s additional 43 runs, finishing with a fine 140 that dragged England back from the brink of 48 for four.

With the second new ball just six overs old and offering plenty of swing, the Windies still had to wait for more than half an hour to make a breakthrough.

Bairstow looked focused and Chris Woakes was solid in defence, and it took a change of bowling to move the dial. Seales did not produce the same kind of movement through the air that Kemar Roach had been getting but he did muster more speed and bounce.

Woakes (28) was undone by the Trinidadian’s fourth delivery, which kicked up off the pitch and brushed his glove on the way through and Overton bagged a two-ball duck when he fended a ball away from his ribs and into the hands of Nkrumah Bonner at short-leg.

Suddenly, at 285 for eight, England were once again faced with the prospect of failing to reach 300. Bairstow got them there, but not before a couple of fortunate moments.

He should have been caught and bowled by Jason Holder on 126, pushing back down the ground, and was lucky to see a wild swing against Seales fly over the slips for four. 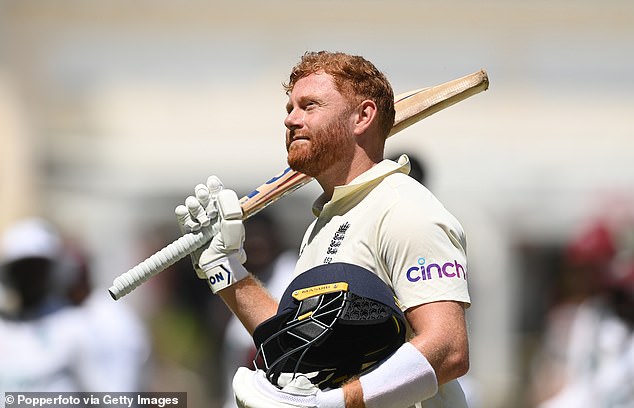 But his knock was the fitting fulcrum of England’s best batting performance of a harsh winter. Hopes of pushing much further on subsided when Mark Wood flapped an Alzarri Joseph bumper to point, leaving Bairstow with last man Jack Leach for company.

Deciding to play his shots, he hacked a steepling catch into the swirling winds off Joseph but saw Holder live up to his name by watching it all the way into his hands.

In the controversial absence of James Anderson and Stuart Broad, England opened the bowling with Chris Woakes and Craig Overton, with neither managing to discomfort Kraigg Brathwaite (29no) and John Campbell (14no).

Woakes leaked 21 from his first three overs, while Overton took two from each end without forcing a scare. Mark Wood’s pace and an over of spin from Jack Leach changed things up but the runs continued flowing at a healthy rate.