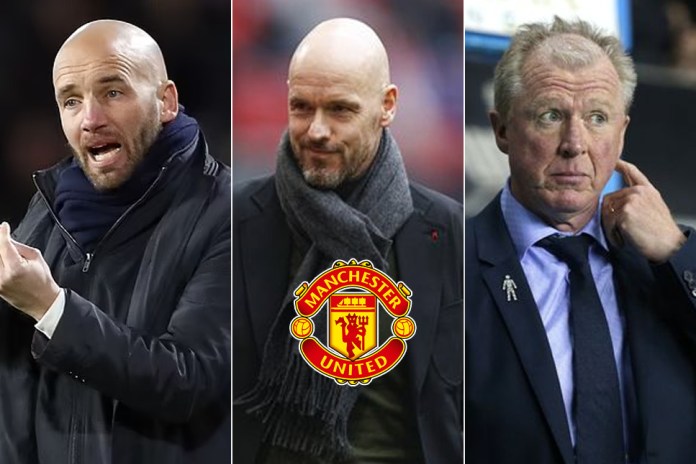 Former Old Trafford favourites Ruud van Nistelrooy and Robin van Persie were considered for the role but both are currently unavailable.

United are not opposed to the move but would prefer Ten Hag to assess the current coaching set-up at the club before making a final decision. Former Ferguson No 2 Mike Phelan, as well as Chris Armas – who was brought in by interim manager Ralf Rangnick could be on their way out.

Ten Hag worked as McClaren’s assistant at FC Twente as he rebuilt his reputation after a bad spell as England manager.

The 60-year-old coach had recently stepped down as Derby’s technical director in September when the Championship club went into administration. He has also managed Newcastle, Nottingham Forest, Derby, Middlesbrough and QPR, having achieved huge success as Ferguson’s assistant when United won the Treble in 1999.

McClaren and Ten Hag worked successfully together during that sole season in Holland, with Twente finishing second in the Eredivisie. Ten Hag left that summer and McClaren steered the Dutch side to their only top-flight title that following term.

Recently, McClaren has been working on a project with FIFA led by Chief of Global Football Development Arsene Wenger, looking into development pathways in all 208 FIFA nations.

Speaking about Ten Hag’s qualities, McClaren said, ‘His great strength lies not just in his attention to detail and organisation,’ he told The Telegraph. ‘He has a clear philosophy of how he wants to play football; the environment he wants to create.

‘The player progression programme was a key part of Twente. He has done that at Ajax too, for each player from the academy to the first team.

‘You look at Hakim Ziyech and now the [Brazilian] striker Antony, a very good player who will be the next one to go. I have seen this Ajax team and it’s very good. Erik is very disciplined and people have to buy into that and have that work ethic.

‘Tactically he’s outstanding. He worked with Pep [Guardiola] at Bayern Munich and took in his philosophy too. They called him “Mini Pep” out there. He’s ready. A lot of top clubs in Germany and England will be out to get him.’