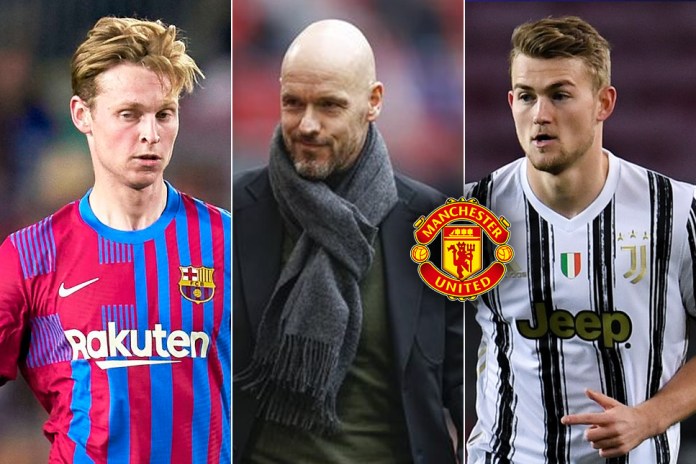 Man United are monitoring Barcelona midfielder Frenkie de Jong but accept a deal is difficult to pull off with the Catalan side demanding £86m for the Dutchman who will only leave for Champions League football.

The Red Devils are said to be in the market for a central midfielder as new manager Erik ten Hag will look to rebuild the squad on his arrival at Old Trafford at the end of the season.

Frenkie de Jong situation. There has been contact with Manchester United, yes – but sources say there’s no full/close agreement with Barcelona, as of today. 🇳🇱 #MUFC

United are reportedly aware that Barcelona could be willing to part with De Jong as they look to offload players to fund their summer transfer business. However, the Premier League side will face a challenge for the Dutchman with some at the club accepting that the deal could prove to be difficult, according to ESPN.

Man United are also looking for a central defender with Eric Bailly and Phil Jones expected to leave in the summer and Erik ten Hag’s former player De Ligt has caught the eye.

However, if he was told by the Catalan giants that he was no longer needed at the club, De Jong is believed to want to join a side with Champions League football. United are now guaranteed to be playing European football next season but their tumultuous campaign has meant it will not be in the Champions League.

They are currently sixth in the Premier League, though West Ham could go ahead on goal difference if they win their clash with Manchester City on Sunday. However, Barcelona are not prepared to sell De Jong for a fee less than €100million (£86m), according to Spanish publication SPORT.