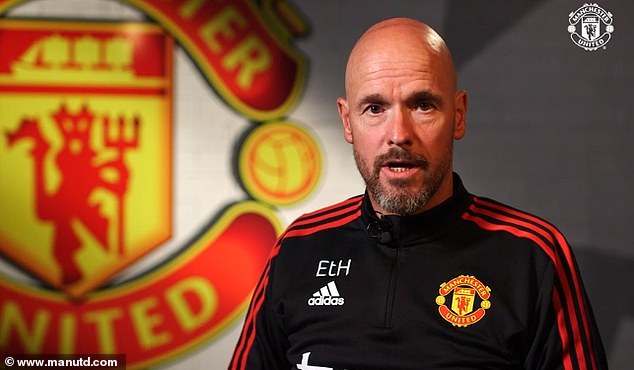 Erik ten Hag has vowed to bring the ‘good times’ back to Manchester United as he promised to implement a ‘proactive’ style of football during his time at the club.

United endured a miserable campaign last term, finishing with their lowest Premier League points tally and failing to qualify for the Champions League.

The Red Devils have not won a trophy since lifting the Europa League under Jose Mourinho in 2017, their longest drought in four decades.

The dismal 2021-22 season, coupled with anger and fury from fans at the Glazer ownership, has darkened the mood at Old Trafford, while supporters are also frustrated at the lack of activity in the transfer market so far this summer.

Dutch left-back Tyrell Malacia is the only arrival having signed from Feyenoord for £14.6million, a disappointing return at a time where the club are supposed to be embarking on a significant rebuild. 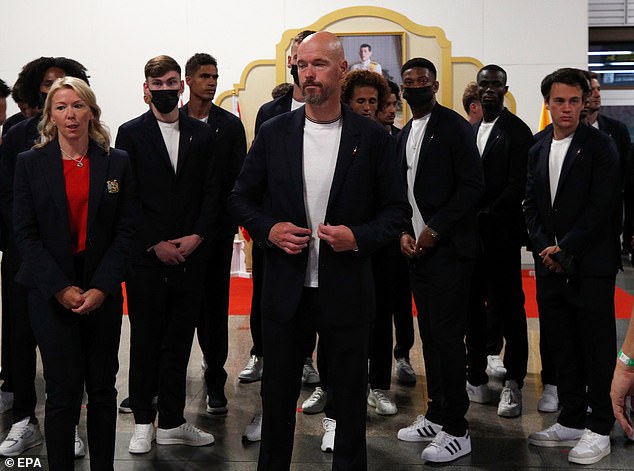 United have also been rocked by Cristiano Ronaldo’s desire to leave if they receive a suitable offer for him, and there was no mention of the wantaway Portuguese star in the first part of Ten Hag’s interview with club media.

But Ten Hag has insisted the supporters remain positive and those he had encountered in his time in England were ‘really supportive’ of the club despite their recent travails.

‘I do feel they are really committed to this club, waiting for good times and they are really supportive of Manchester United,’ Ten Hag told club media. ‘It’s good to see that and it motivates me even more.’

Ten Hag, who has arrived in Bangkok with his 31-man squad for United’s pre-season tour, has also insisted his team will be bold in attack and defence.

United have lacked a defined style of play for several years, with interim manager Ralf Rangnick failing to execute his famed gegenpressing during his short spell at the club. 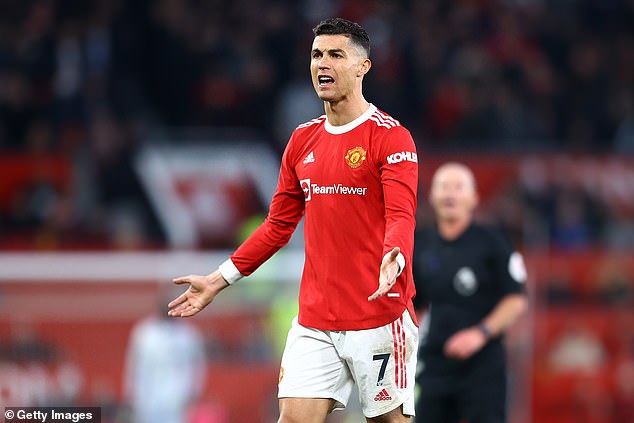 ‘We want to play a proactive style of football – on the ball and off the ball,’ Ten Hag said.

‘That is, trying to do that has to be our intentions and it’s now, firstly, the coaches bring it over to the team that we are, in every situation, proactive. We are brave and willing to have the ball, to give each other options. But also off the ball, to get the pressing style is what we’re working for together.’

‘That is my job, to construct a team and to improve the team. You can do it in different ways or in more ways but, to start, it is out of a philosophy.

‘And then you build it and go into the individuals, and you give them the rules and principles. 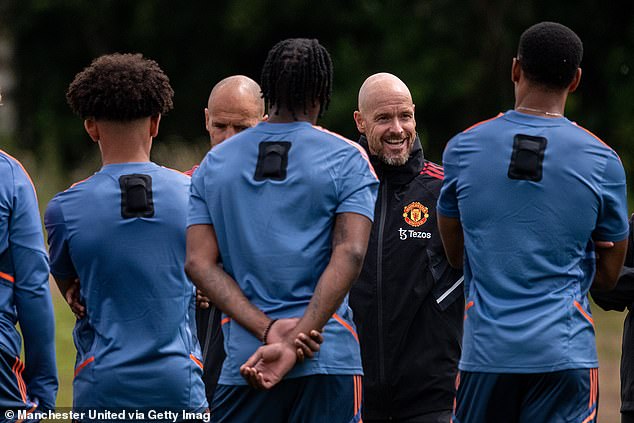 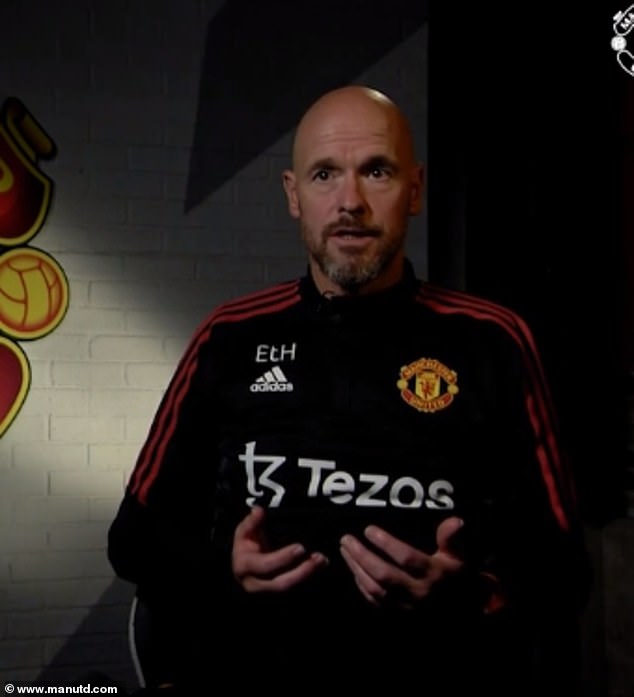 ‘But, also in the positions of individuals, you give them coaching advice, and, in the end, it’s about team results and better team performances so you give them advice to perform into the team.’

Ten Hag also welcomed the signing of Malacia, a player he knows well from his time in Dutch football.

‘I think he’s the modern left-back or full-back,’ the United manager said. ‘He suits the profile and most important is, from every full-back, that he closes the right area, but he can also take part in the offensive side of our game, and he can do that really well. And I think he will really contribute to the team.’

Ten Hag’s first game in charge of United will be the pre-season friendly with Liverpool in Bangkok on Tuesday.

The squad then travel to Australia for matches against Melbourne Victory, Crystal Palace and Aston Villa in the club’s first pre-season tour since 2019. 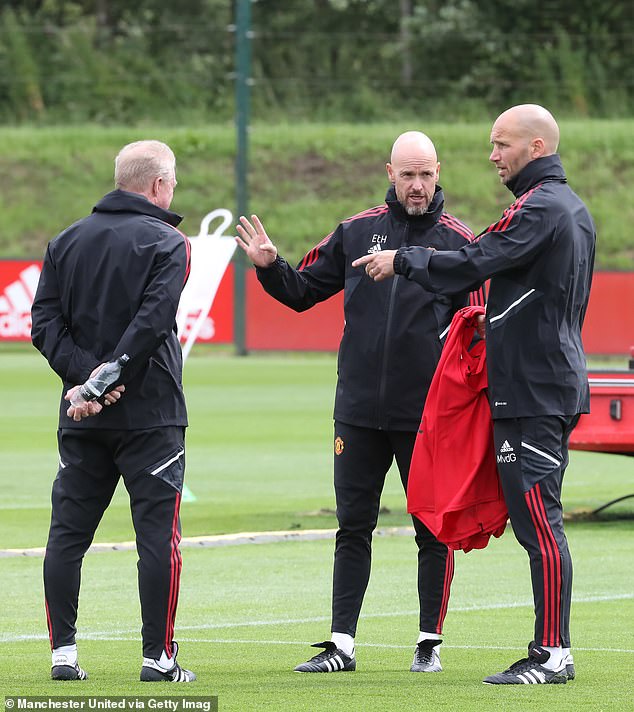 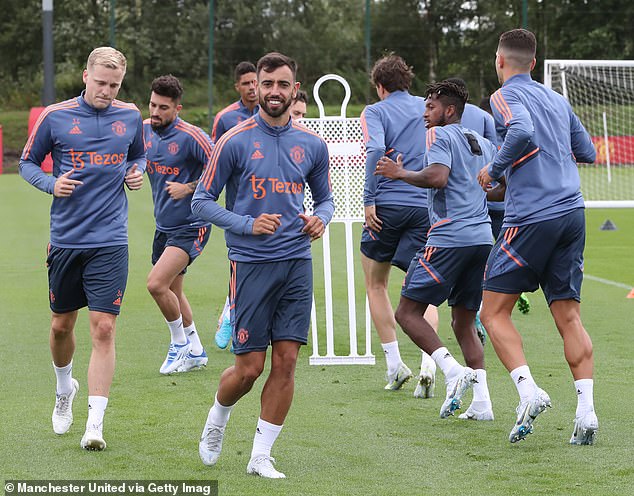 ‘I have to learn, to know my squad, the personalities, the individuals, the players,’ said Ten Hag.

Footage of Ten Hag in training has shown him telling the players they are making ‘too many mistakes’, but he has also been seen encouraging his new charges.

‘Of course, I want to bring the energy in my team, but I must say, the players do really well,’ he said.