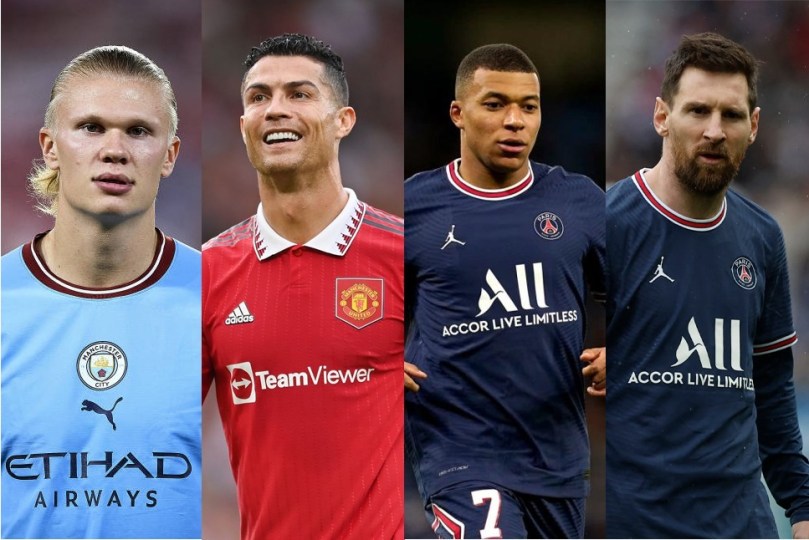 Erling Haaland Goals Record: Erling Haaland has taken the footballing world by storm. In his first 100 games in Europe’s top leagues, the Norway international has averaged better than a goal per game. The £51 million summer signing of Manchester City has dominated the Premier League, scoring an absurd 14 goals in just eight league games. With his stunning haul of goals, Erling Haaland has left footballing legends like Lionel Messi, Cristiano Ronaldo, and modern great like Kylian Mbappe miles behind. Follow InsideSport.IN for LIVE updates about Premier League 2022-2023

After 100 games in Europe’s top divisions, the 6 ft 4 striker statistics are miles ahead of those of players like Kylian Mbappe, Cristiano Ronaldo, and Lionel Messi.

In 100 league games, while playing for Borussia Dortmund and Manchester City, Haaland has scored an absurd 103 goals as per The Sun.

That is more goals than Mbappe scored in his first 100 Ligue 1 games, which was 48. While Messi and Ronaldo, two of the greatest players ever, are even more behind.

Messi scored 41 goals while playing for Barcelona in their first 100 La Liga games. Ronaldo only managed 16 goals in his first 100 games in Europe’s top leagues.

The 187th competitive encounter between the teams saw the highest scoring Manchester derby history, with City winning. With a record-breaking nine goals in his first five Premier League games, Haaland had already cemented his place in history before the game ever started.

He then accomplished a historic treble against Erik ten Hag’s squad after scoring hat-tricks at home against Crystal Palace and Nottingham Forest.

Some extra motivation for the week! 🔵 #mancity pic.twitter.com/hueeFkZnfD

In addition, Haaland became the first City player since Francis Lee in December 1970 to score a hat-trick in a Premier League derby.

His accomplishments are highlighted by the fact that he broke Michael Owen’s record for the quickest player to score three hat-tricks in the Premier League. Haaland just needed eight games to get a hat-trick of hat-tricks, but Owen needed 48.