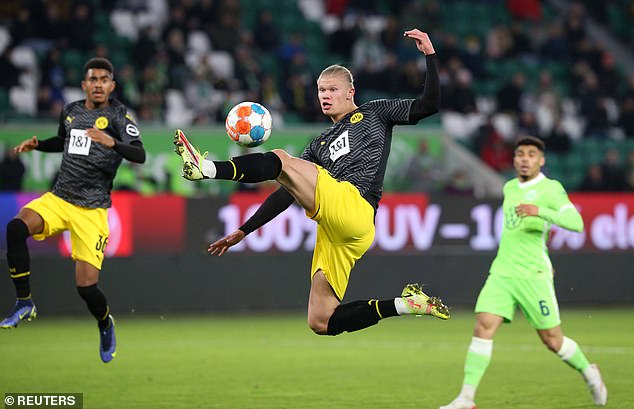 ‘MOTM goes to the camera man’: Erling Haaland reacts to a hilarious video of a furious Wolfsburg fan flipping him off from the stands in response to the forward’s goal in Borussia Dortmund’s 3-1 victory

Erling Haaland marked his return from injury with a goal for Borussia Dortmund – but not everybody was happy to see him back.

The striker came off the bench during Dortmund’s 3-1 away win over Wolfsburg for his first game in six weeks after recovering from a hip injury on Saturday.

The 21-year-old was on the pitch for just seven minutes before he marked his return with a goal.

The Norwegian got on to the scoresheet, volleying in Dortmund’s third goal to become the youngest ever player to reach 50 Bundesliga goals at 21 years and 128 days.

Haaland ran away from goal in celebration before dropping to one knee and pointing to the home fans.

The celebration managed to rile up one Wolfsburg fan in particular and the cameras immediately panned to the stands to capture her reaction. 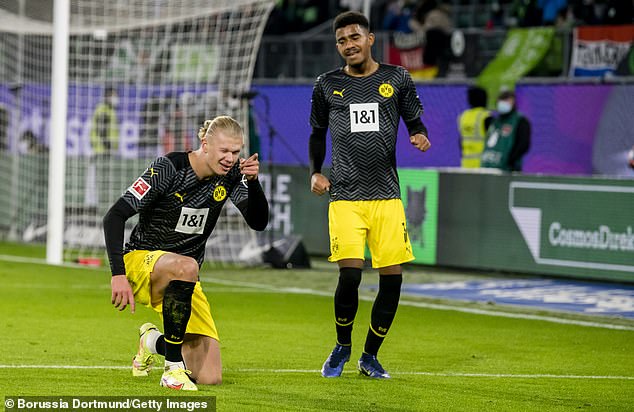 She may have been wearing mittens but it is not hard to imagine the gesture beneath them as she angrily threw up her hand and shouted down at Haaland.

Fans were quick to react to the clip on social media and Haaland himself even chimed in with a witty response.

Haaland replied to the post in agreement, saying: ‘Was thinking the same. MOTM goes to the cameraman today.’ 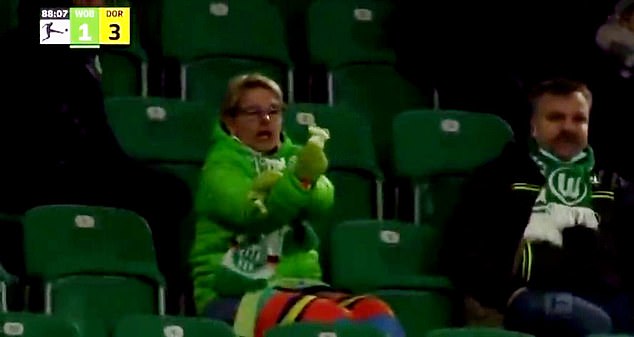 One Wolfsburg fan did not take too kindly to the celebration, angrily flipping Haaland off

The Norwegian responded to the video on Twitter, claiming the cameraman deserved MOTM

He quote-tweeted another video of his exchange, with the caption: ‘This is why we love football.’

One fan wrote: ‘Don’t provoke the fans, even if you’re Haaland.’

Dortmund are on 30 points, just one behind leaders Bayern Munich after they clinched a 1-0 victory over Arminia Bielefeld on Saturday evening.