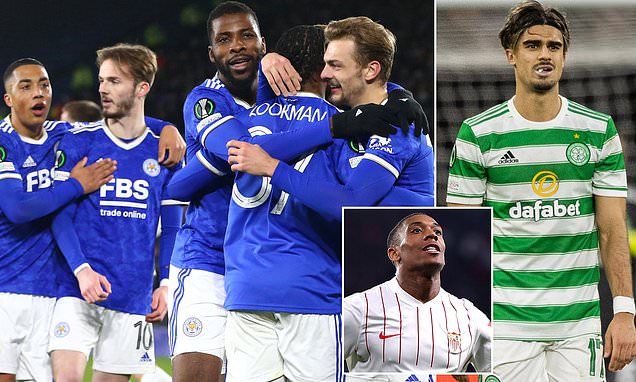 LIVE: Leicester travel to Randers in full control after a huge home win, while Celtic are up against it as they travel to Bodo/Glimt in the Europa Conference League… plus all the updates as Sevilla, RB Leipzig and Porto play in the Europa League

Leicester will be looking to book their place in the Europa Conference League last 16 as they travel to Randers FC, following their 4-1 in the first leg.

Elsewhere, Celtic face a huge task in their trip to Bodo/Glimt this evening, as the Scottish Premiership side look to turnaround their 3-1 drubbing from the first leg at Celtic Park.

Sevilla, RB Leipzig and Porto will all be in action during the early European kick-offs as they look to progress into the last 16 of the Europa league.

Follow Sportsmail’s JAMES COHEN for for live coverage with British duo Leicester and Celtic in Europa Conference League coverage, including build-up, team news and updates. We’ll also bring you all the updates from the Europa League.