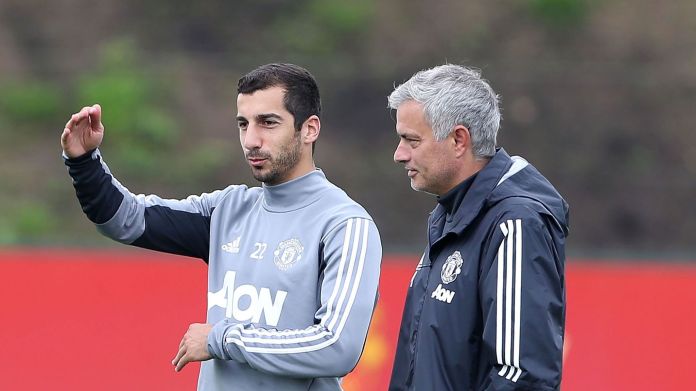 When asked about his relationship with Roma attacker Henrikh Mkhitaryan after the pair worked together at the Premier League giants, he told Sky Sports: ‘We won together three titles at Man United, unfortunately the last three titles of Man United.

“I say unfortunately because I like the club very, very much and I wish the club the best. We won three titles together so everything went well, in the second season was a little bit different.”

Mkhitaryan joined United in the summer of 2016 from Borussia Dortmund before departing for rivals Arsenal in a swap deal involving Alexis Sanchez in January 2018 after struggling to hit the heights he did in Germany.

The Armenian international won the Europa League in his first season at the club, scoring United’s second goal in the final against Ajax. However, it was arguably his stand-out moment in Manchester as he failed to convince Mourinho, resulting in limited game time under the Portuguese boss.

Mkhitaryan admitted last year that life at United was ‘hard’ under Mourinho but insisted he had no regrets over his Old Trafford move.

The 33-year-old is now flourishing under Mourinho in Italy, scoring five goals and supplying nine assists in 43 appearances this term, proving to be a reliable and versatile player Mourinho can call upon.

Manchester United: “I like the club very much and I wish the best,” says Ex-Man United manager

“The thing that makes me really happy was because in the beginning as always people try to go on the negative and people trying to say “Mkhitaryan with Jose has no chance, Jose’s the kind of guy that when things go wrong never go well again” and it was proven exactly the opposite,” he continued in the interview.

‘We were very mature, honest with each other, at that time even with Mino [Raiola], rest in peace Mino, the discussion was very good.

‘We all know that I try always to be very, very honest with the players. I saw my project in Rome needing a player like Mkhi. I also understand immediately at the beginning the importance of Mkhi even in the group and he’s had an amazing season.

‘He’s helping us to cope with all the problems that we face as a small squad, as a squad without many options, he was playing everywhere – playing as a winger, as a 10, then we had injuries and Covid situations and he became a central midfielder that he’s never been in his life.

‘I’m so happy with Mkhi and people understanding that with me not everything is black or white and it’s possible that a player becomes with a different relation than it was in the past.’

Manchester United: “I like the club very much and I wish the best,” says Ex-Man United manager Jose Mourinho, Roma boss discusses his time at Old Trafford with Henrikh Mkhitaryan