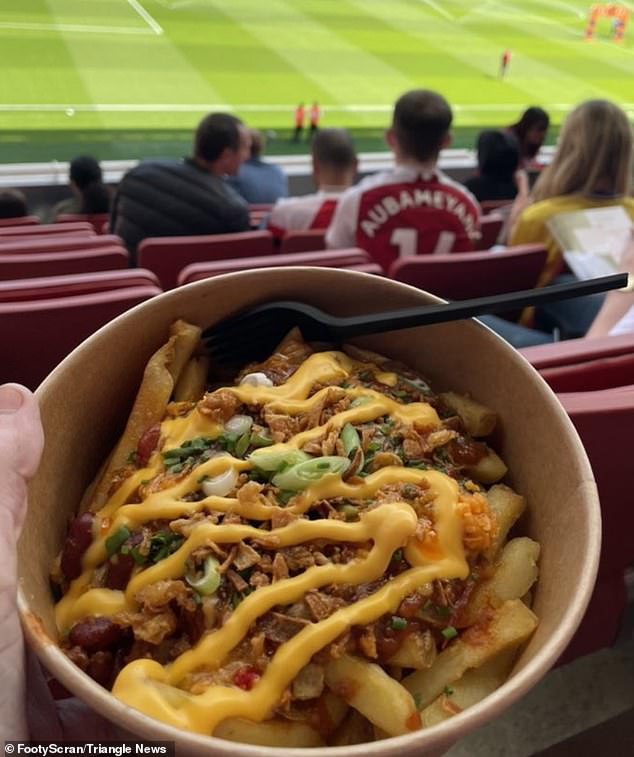 ‘Does the price include match ticket and a lift home?!’ Fans blast Arsenal for charging nearly £13 for portion of CHIPS at Emirates Stadium amid cost-of-living crisis

By Mark Tovey For Mailonline

An indignant Arsenal fan stirred up a storm on Twitter yesterday when he posted a picture of a portion of chips that set him back nearly £13.

Fans – feeling the pinch by the cost of living crisis – slammed the Premier League club for the sky high price.

One quipped that was the same as a deposit on a house in some parts of the country.

Another joked that a match ticket and travel home should be included for that price.

A third wrote they’d need to increase their bank overdraft to pay for it.

An indignant Arsenal fan shared a picture of the £12.60 Gunners’ Chilli cheese fries – which came topped with spring onions, a few tiny pieces of meat and cheese sauce

They cost £12.60 at their Emirates Stadium where Arsenal beat 10-man Leeds United 2-1 yesterday/on Sunday (May 8).

One home fan proudly showed off his portion which was shared on Twitter page Footy Scran.

‘I could do with a snack here at the Emirates, but I thought I’d better check my overdraft limit first.’

Bury footballer Jimmy Moore said: ‘Deposit for a house in Rochdale that.’

A Newcastle supporter – called Matt – said: ‘I hope the food price includes a match ticket, tour of the stadium and a lift home on the first team coach.’

‘Those prices wouldn’t last two mins in Glasgow. And spring onion at the football?’

One supporter added: ’12 quid for some f*****g fries absolutely mental.’

Arsenal sparked fury in December after it was revealed a burger and chips cost £18.05. 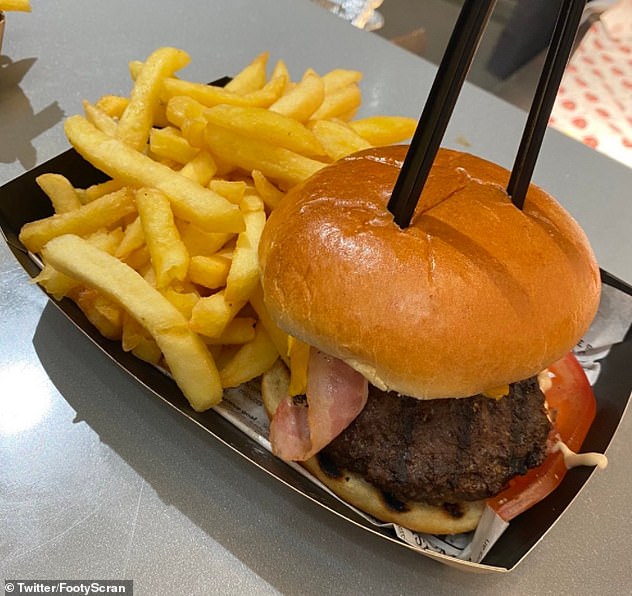 An image posted on the Twitter account Footy Scran in December 2021 showed a burger and chips at the Emirates that cost a whopping £18.05 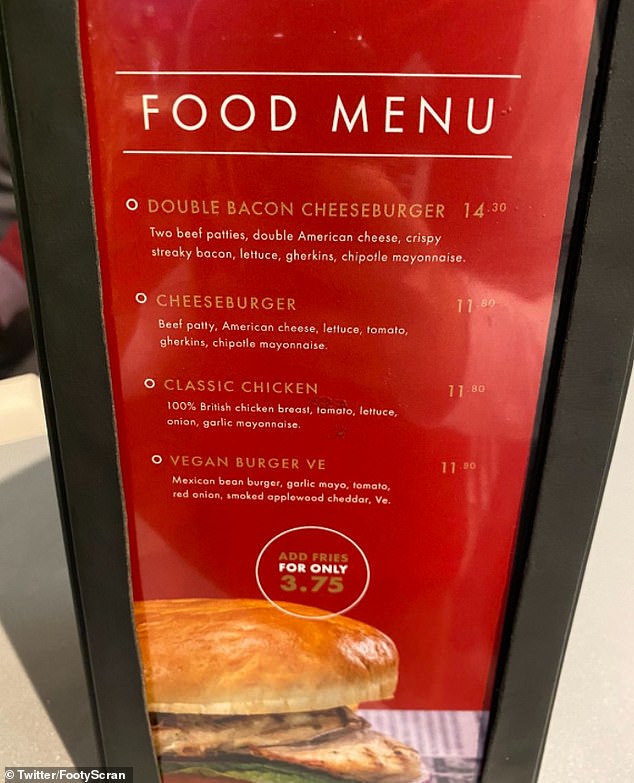 A picture of the £18.05 burger and chips showed it came served up on a card platter with two slices of cheese, a bit of bacon and a slice of tomato.

Championship side Birmingham City were slammed last year for selling cheesy chips – which was a slice of processed cheese next to the fries for £4. 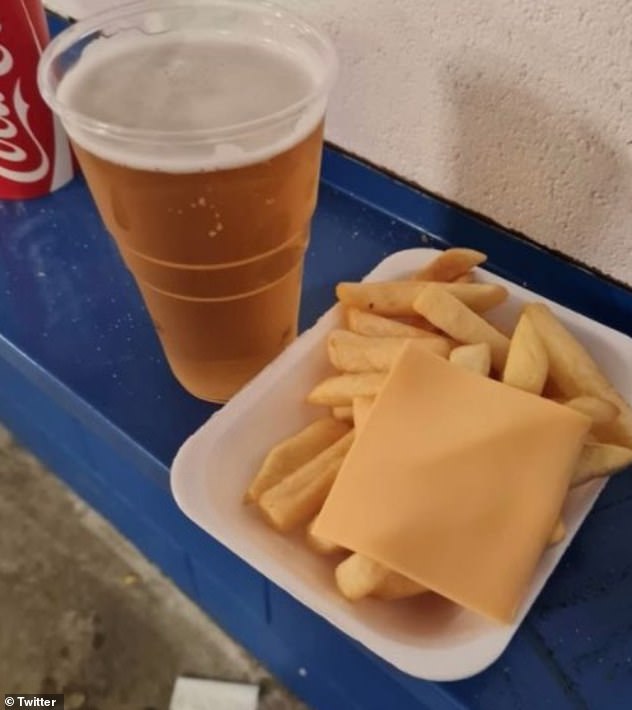 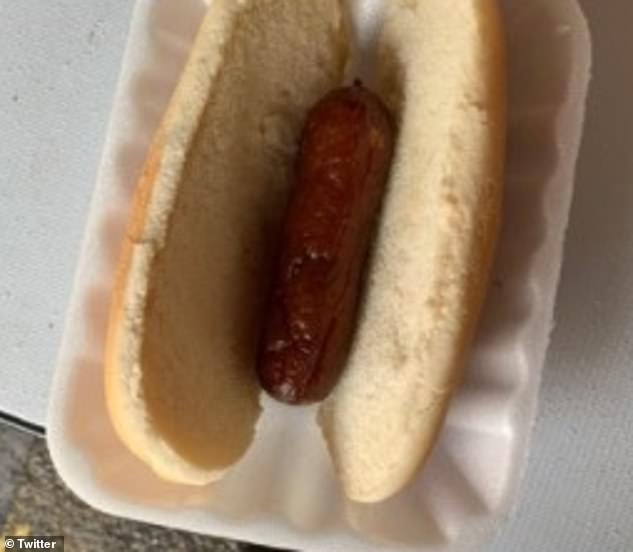 A small sausage served at Burton Albion for £3 was dubbed ‘disgraceful’ by fans, who joked they would’ve thrown the food back

One served at Morecambe cost a whopping £4 and another at fellow League One outfit Burton Albion was £3.

But both had a miniscule sausage which looked lost in the buns, with fans on Twitter calling the offering ‘disgraceful’ and saying they would have ‘thrown it back’.

On the other end of the value spectrum, Twitter account ‘Footy Scran’ compiled some of the more wallet-friendly offerings at stadiums around the country – including a Lebanese chicken flatbread at Barnsley (£5), pigs in blankets at Oxford City (£3.50). And Altrincham FC’s pie, chips, peas and gravy meal (£5).

Have you paid eye-popping prices for a pint and chips or other nosh while at the football? Contact mark.tovey@mailonline.co.uk.

Football food: Some of the best, worst and most expensive grub served up at grounds

Fans ridiculed Chelsea’s ‘cauliflower wings’ dish on Twitter last month, joking Abramovich should ‘have his sanctions increased for that’.

The picture shows a box with just five pieces of cauliflower wings with four celery slices which is priced up at a whopping £7.95.

A lot of comments brought up Chelsea owner Roman Abramovich’s sanctioning, with one saying it was ‘no wonder’ the Russian had been sanctioned describing the price as ‘ridiculous’. 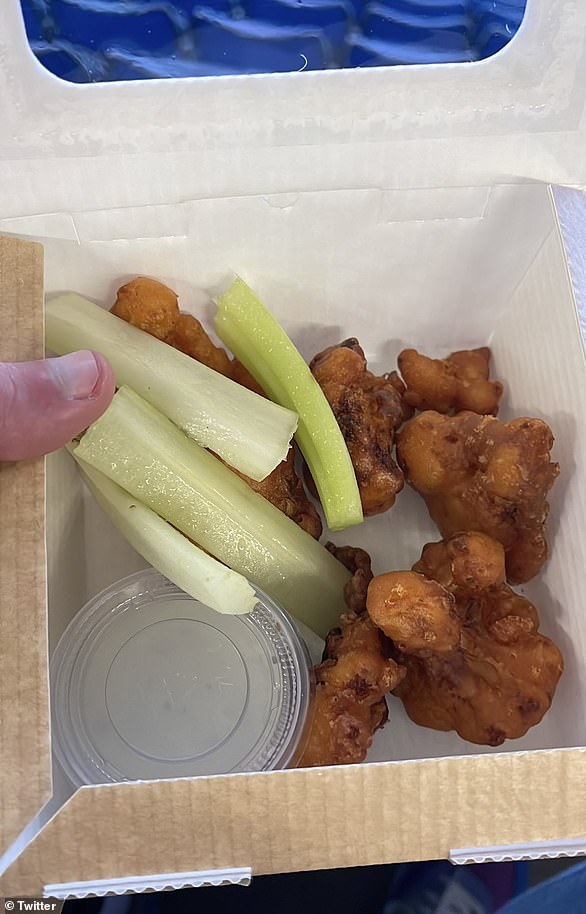 The semi-professional team who play in the Southern League Premier Division South, showed some of the big boys what a good half-time meal looks like, sharing a picture of a delicious bacon cheeseburger, priced at a reasonable £5.50.

They added: ‘Bit of a trek but if you’re ever at the top of Hampshire.’ 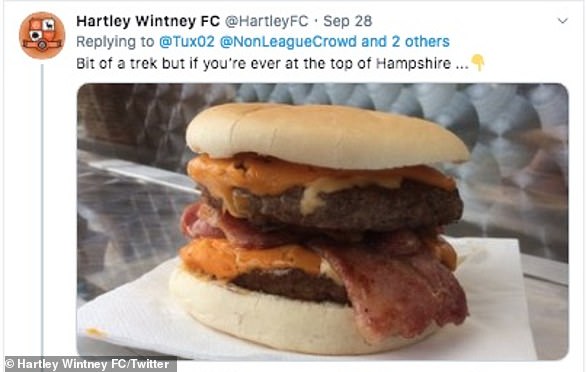 Hartley Wintney FC, who play in the Southern League Premier Division South, showed fans what a good half-time meal looks like by sharing a photo of a delicious bacon cheeseburger

Fan Tristan Broadhead posted a snap of his crusty-looking pie he said he bought at Championship side Barnsley. 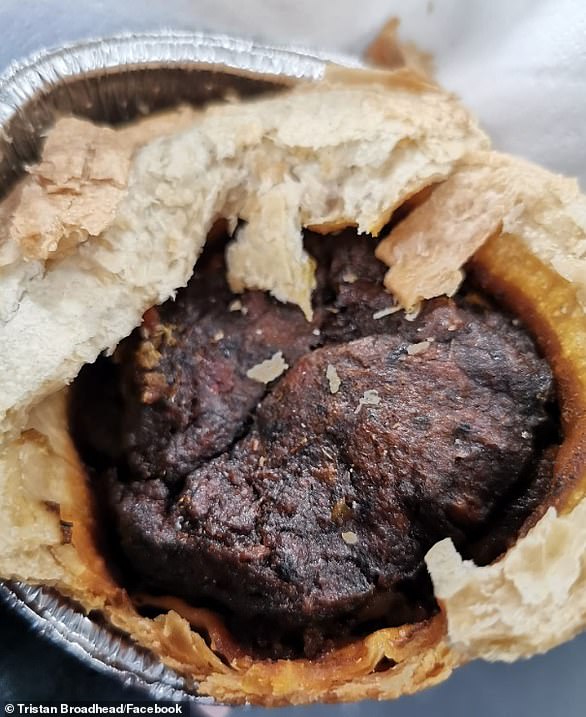 Steak and stale pie: Fan Tristan Broadhead posted a snap of his crusty-looking pie he said he bought at Championship side Barnsley. He said: ‘Standard pie quality at Oakwell’

Embarrassed by their sorry offering, the red-faced Southern League Division One South side messaged Mr Tucker blaming the poor food on a new member of staff.

A representative said: ‘That’s embarrassing. Free ticket and a burger next time you come over just let me know. It was a new member of staff, sorry!’

George then replied: ‘Thank you! That’s a very kind gesture.’ 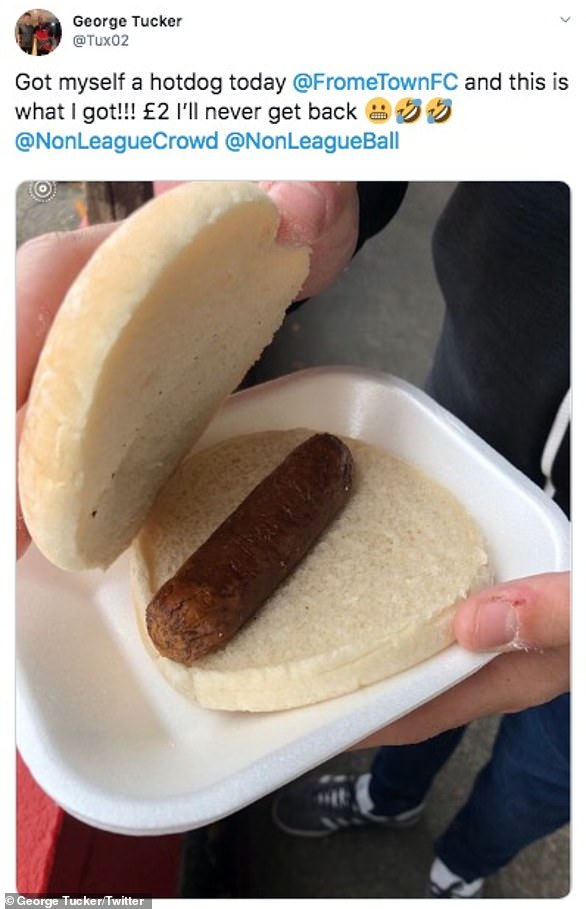 Hot dog’s dinner: Football fans up and down the country have taken to social media to share the food horrors offered up at stadiums during half-time, after one supporter who ordered a £2 hot dog was handed a solitary burnt sausage in an extra-large bap