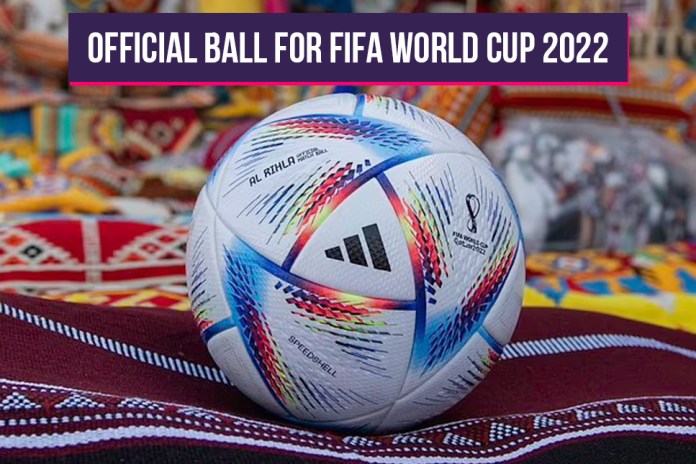 ‘Al Rihla’ as is named translates to ‘The journey’ draws its significance from the boats that can be seen on the flag of the host nation, Qatar. This new official ball is set to be the most advanced ball ever made that can match the game speeds and will also be the fastest ball to travel in the flight.

FIFA WC 2022 Official Ball: Adidas unveils official ball of FIFA World Cup 2022 in Qatar, will be called ‘Al Rihla’, the fastest and most accurate ever

FIFA’s director of marketing, Jean-Francois Pathy said, “This is a stunning, sustainable and high-quality official match ball from adidas that will be enjoyed by stars performing at the top of their game on the world’s biggest stage in Qatar, as well as grassroots players everywhere.”

There has often been quite a skepticism about the official football, with Adidas Jabulani making the headlines in the 2010 World Cup. The Al Rihla is one of the most unique balls that have been solely created based on performance analysis, data, and statistics. Rigorous testing has been carried out both in matches and in wind tunnels to perfect the ball and to make it the fastest and the most accurate ball to be ever made.

One of the key features of this new ball which proves to be vital for its accuracy and fast nature is the surface textures of the ball along with the panel shape.

Franziska Loffelmann, the Design Director – Football Graphics & Hardwear at adidas added: “The game is getting faster and, as it speeds up, accuracy and flight stability become critically important. The new design allows the ball to maintain a significantly higher speed as it journeys through the air.”

“For the biggest global stage in all of sport, we set out to make the impossible possible with radical innovation by creating the fastest and most accurate FIFA World Cup ball to date,” he added.

Also Read: FIFA World Cup 2022: Chile, Colombia, and Nigeria bow out of the Qatar World Cup after failing to make it past their group stage qualifiers

Al Rihla will also be the first of its kind in the new age of football that will be inked with water inks mixed with a blend of glues. The biggest concern for this ball would be to live up to its hype and keep the standards high.

The predecessors of Al Rihla like the Adidas Jabulani of the 2010 WC and the Telstar of the 2018 World Cup face immense criticism. The Jabulani made the headlines for all the wrong reasons after goalies and players commented on the abysmal behaviour of the ball in mid-flight.

Former USA goalkeeper Tim Howard spoke heavily about the Jabulani in 2010. He said, “What does it do? What doesn’t it do, would be a better question. It moves all over. If you hit five balls with the same striking motion you wouldn’t get the same result.”

The 2018 ball, The Telstar was criticized by the goalkeepers who complained about the lack of grip on the ball.

FIFA WC 2022 Official Ball: Adidas unveils official ball of FIFA World Cup 2022 in Qatar, will be called ‘Al Rihla’, the fastest and most accurate ever