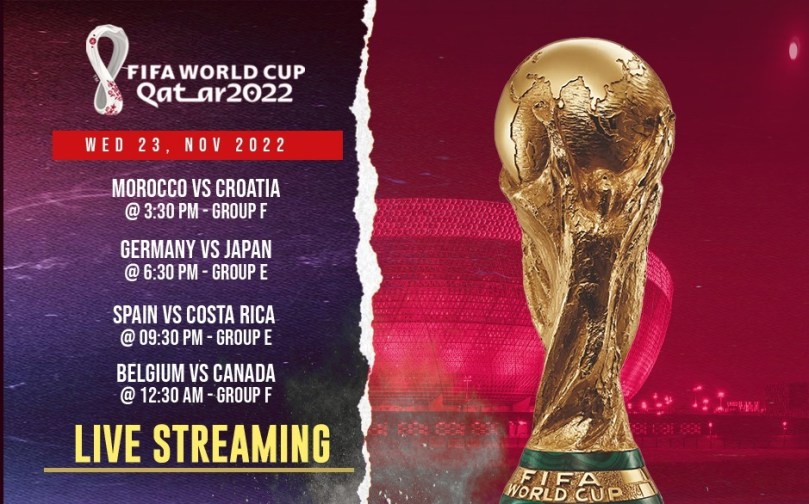 FIFA WC LIVE Streaming: Qatar World Cup 2022:  After a day of upset, football fans will have three heavyweights fighting for points on Day 4. The day will kick off with Morocco vs Croatia at 3:30 PM. Last edition’s runners-up may not be the same, but Luka Modric & Co will hold the edge. In for some serious action, 4-time-world champions Germany will face Japan at 06:30 PM IST. In the evening, 2010 champion Spain will clash with Costa Rica at 9:30 PM IST. Last but not least, Belgium take on Canada in the fourth offering for the day, and the game will at 12:30 AM.. Watch FIFA WC LIVE Streaming on Jio Cinema & FIFA World CUP LIVE Updates with InsideSport.IN

Group F: Morocco vs Croatia (3:30 p.m. IST): The first of the four battles scheduled for Wednesday will witness Morocco going toe-to-toe against Croatia at the Al Bayt Stadium. Croatia, the 2018 edition runners-up, have undergone a change in four years’ time. While the performances haven’t been of the same standard, with some quality players, Luka Modric & Co will be confident. However, Morocco equally have quality on their side as well.

Group E: Germany vs Japan (6:30 pm IST) – The 2nd match of the day will be crucial for Germany. With a new coach at the helm, this is Germany’s time for a resurgence. They will look to put their humiliating Group Stage Exit in the last edition in the past. But Germany will be wary of Japan threat. Their loss to South Korea is still fresh and against another Asian giant, Manuel Neuer & Co will be careful.

Group E: Spain vs Costa Rica (09:30 pm IST) – The 11th match of the World Cup comes from Al Thumama Stadium in Doha, where 2010 edition champions Spain takes on Costa Rica, again from Group E. Spain in particular has a point to prove, who hasn’t been at its best in the World events in the past decade. Spain has a young side, and under Sergio Busquets, it will look to not only impress but go the distance in Qatar.

Group F: Belgium vs Canada (12:30 am IST) –The last offering of the day is a Group F fixture and will take the football fans to the Al Rayyan Stadium in Qatar. A power-packed Belgium unit will take on a young and inexperienced Canada in their opening match of the World Cup. Belgium has a star-studded line-up with the likes of Kevin De Bruyne, Eden Hazard, and Thibaut Courtois in their lineup. Star forward Romelu Lukaku is unlikely to feature in the starting XI due to an injury. The only thing Belgium needs to be wary of is complacency. Despite having a star-studded line-up, the Eden Hazard-led unit has been a disappointment on the world stage.

All the matches will be broadcast live on the Sports18 and Sports18 HD TV channels in India and Jio Cinema’s app and website will both provide free live streaming of the matches.