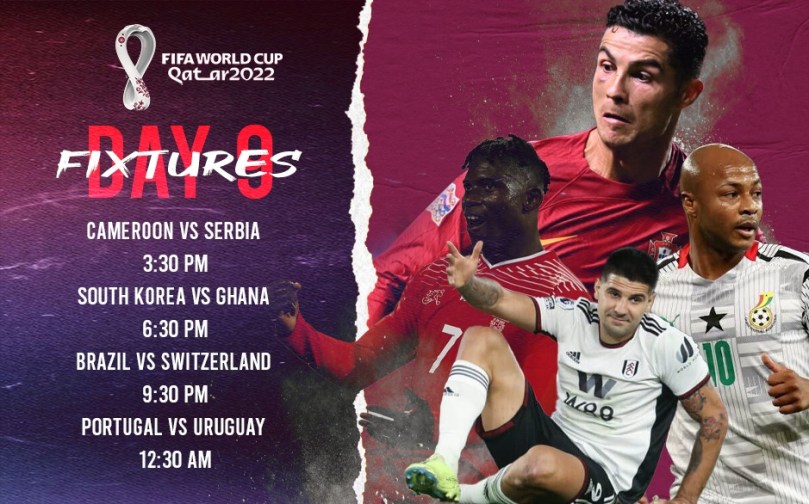 FIFA World CUP 2022 – Day 9 FIFA WC Schedule: Today in FIFA WC tournament favorites Brazil, Portugal will be in action. The Group G & Group H teams will play their 2nd matches of FIFA WORLD CUP 2022. In the 1st game Cameroon will play Serbia as both teams will play for their 1st victory at 3:30PM. The second match will witness battle between South Korea vs Ghana. Tournament favorite Brazil will gun for 2nd victory against Switzerland at 9.30pm. Portugal vs Uruguay will be played at 12:30AM: Watch FIFA WC LIVE Streaming & Cameroon Serbia LIVE updates with InsideSport.IN

Cameroon vs Serbia LIVE Score – FIFA World Cup 2022 LIVE – The 2022 FIFA World Cup has now entered a stage where there is no turning back for any of the teams. The teams that have done well need to carry on the good work. The ones who have lost are supposed to pull up their socks and get back to winning ways before it is too late. Two teams that will be desperate to open their accounts and stay alive in the competition are Cameroon and Serbia. Watch CAM vs SER Highlights & Follow FIFA WC LIVE Streaming updates with InsideSport.IN

South Korea vs Ghana LIVE Score – FIFA World CUP 2022: In the SECOND match on Monday South Korea will take on Ghana at 6:30PM IST. None of the team can afford a defeat in the game. Korea have a point to their name after an DRAW against Uruguay. But Ghana suffered an agonising defeat 3-2 defeat against Portugal. Both will be searching searching for a first win of the tournament to boost their respective last-16 chances: Watch FIFA WC LIVE Streaming on JIO Cinema & KOR GHA LIVE streaming details with InsideSport.IN

Brazil vs Switzerland at 9:30 PM

Brazil vs Switzerland LIVE Score – FIFA World Cup 2022: Even without Neymar, Brazil will start as big favourites against Switzerland on Monday. The 2nd group match for both the teams will be played at 9:30PM IST. Both Brazil & Switzerland already have 3 points secured in their BAGS. Pre-tournament favourites Brazil opened their campaign with a 2-0 win against Serbia on Thursday, while Switzerland started with three points against Cameroon. A win here could guarantee qualification for the next round for these teams: Watch FIFA WC LIVE Streaming & BRA SUI LIVE Streaming on Jio Cinema & LIVE Updates with InsideSport.IN

Portugal vs Uruguay LIVE Score – FIFA World CUP 2022 – Match at 12:30AM IST: Cristiano Ronaldo’s Portugal can seal LAST-16 spot from Group H on Monday evening. Portugal plays Uruguay, clearly knowing that a victory would see them qualify for the last-16 stage. Fernando Santos’s side registered a 3-2 win over Ghana in their tournament opener. Uruguay on the other hand played out a goalless draw vs South Korea. Defeat for Urugual at the Lusail Stadium can make them exit the event. Watch FIFA WC LIVE Streaming & POR URU LIVE Streaming on Jio Cinema & LIVE updates with InsideSport.IN

In the United States (U.S.), the game can be watched live and on-demand with FUBOTV

Viewers in the U.S. can also watch the game on FS1 (English) and Telemundo (Spanish).

BBC One are showing the clash in the United Kingdom (UK), with streaming via BBC iPlayer.

In India, the Sports18 network has the rights to show World Cup games on TV, with streaming services on JioCinema.