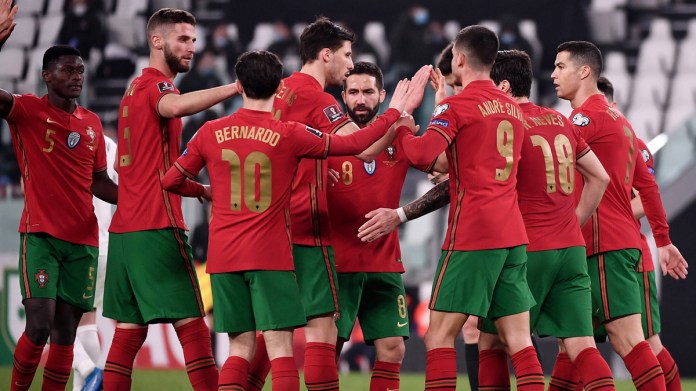 FIFA World Cup 2022 playoffs: Portugal World Cup play-off squad – Portugal have named their squad for this month’s World Cup qualifier with Turkey. Portugal were drawn in Path C in the play-off for the tournament in Qatar later this year and will face Turkey on March 24. The likes of Manchester United’s Cristiano Ronaldo, Diogo Dalot and Bruno Fernandes while Manchester City’s Joao Cancelo and Bernardo Silva also make the squad. The in-form Joao Felix has been included with other star names. Follow InsideSPort.IN for the latest sports news and updates.

Should Portugal beat Turkey they will then face either Euro 2020 Champions Italy or North Macedonia in the final play-off match. Portugal has played in every World Cup since 2002 after failing to make it to the tournament from 1990-1998. They were eliminated by Uruguay in the round of 16 of the World Cup in Russia in 2018.

Portugal were handed a shock 2:1 defeat as Serbia qualify for the 2022 World Cup. Aleksandar Mitrovic scored in the 90th minute as Serbia stunned Portugal with a 2-1 win to qualify for next year’s World Cup in Qatar, and leave Cristiano Ronaldo in danger of missing out on the tournament after four straight appearances.

Mitrovic came off the bench to score the winner with a header after the Portugal defense failed to clear a cross into the area. The 36-year-old Ronaldo complained with his teammates and, after the final whistle, looked desolate as he sat on the field while teammates and opposing players came to console him. Ronaldo is the men’s all-time record-scorer in international soccer with 115 goals.

Now Portugal will have to face the playoffs, involving the other nine group runners-up and two group winners from the UEFA Nations League. The 12 countries will in March in three four-team brackets, with the seeded teams getting a home game in the bracket semifinals. Serbia, which had never beaten Portugal, finished first in Group A with 20 points, three more than second-place Portugal.