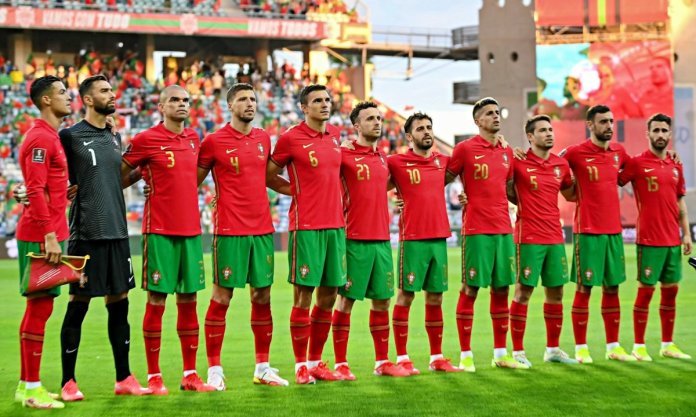 Portugal vs Turkey LIVE: World Cup Playoffs 2022 – Can Portugal carry themselves to the World Cup 2022 or will it be an upset for the Euro Champs at the Estadio do Dragao? One of the biggest shocks in terms of qualifying for the FIFA World Cup 2022 came from Portugal. The Euro 2016 champions failed to top their relatively easy group stage and found themselves placed second on the list after losing their last match against Serbia. Stay updated with the latest team news, predicted lineups, H2H and live streaming/live telecast details. Follow InsideSport.IN for the World Cup news and updates.

The Cristiano Ronaldo-led team will be desperate to win their Do-or-Die encounter against Turkey on Friday to play the final qualifiers on 30th March. This fixture is of utmost importance for CR7 as World Cup 2022 could be the last world cup that would feature this football great. The winner of this fixture will face the winner of Italy vs North Macedonia encounter.

Can the highest goalscorer in men’s internationals guide 🇵🇹 to a win against 🇹🇷?#WCQ #WCQ2022 #SonyLIV pic.twitter.com/LFGFdnhCfi

PORTUGAL: The Euro 2016 Champions were already without the Ruben Dias and the suspended Joao Cancelo who still joined the team during the training session. But the team took a hit as the ever experienced and robust Pepe has tested positive for COVID-19 and will miss out against Turkey.

Wolves midfielder Ruben Neves has been withdrawn due to injury and has been replaced by Vitinha while Josa Sa will be the second choice keeper to replace the injured Anthony Lopes.

In-form Renato Sanches is also suspended but is injured anyway and either Tiago Djalo or Gonalco Inacio will most probably be handed their debuts in defence alongside Jose Fonte.

The Turks have no suspension concerns and will welcome Mert Muldur back from a ban served in the Montenegro win, although Zeki Celik will still expect to get the nod at right-back.

Celik will expect to join Caglar Soyuncu and Merih Demiral in the visitors’ defence, as 30-goal striker Burak Yilmaz shoulders the goalscoring burden at the age of 36.

Kerem Akturkoglu has shone for Galatasaray this term and ought to edge out Baris Yilmaz for a start on the left, but Orkun Kokcu came off the bench to score the winner against Montenegro last time out and could come into Kuntz’s thinking alongside the returning Cengiz Under.

The Head-To-Head stats are heavily poised for Portugal, after having won 3 out of their 4 encounters against Turkey. The only time Turkey bettered Portugal was during International friendlies in 2012. Portugal has subsequently won their ties thrice during European Championships in 2008, 2000, and 1996.

When will Portugal vs Turkey kick-off? Date

The World Cup playoff match between Portugal vs Turkey will kick-off on 25th March, 2022

What time will Portugal vs Turkey kick-off? Time

Portugal vs Turkey will kick-off at 1:15 AM

Where will Portugal vs Turkey be played? Venue

World Cup Playoffs 2022: Portugal vs Turkey – When and where to watch World Cup playoffs Live streaming?

Which TV channel will broadcast the World Cup Playoff Matches?

The Matches will be telecasted on Sony Sports Network in India. Fans can enjoy the match live on Sony Ten 1, 2, 3 and their HD Channels as well.

World Cup Playoffs LIVE Stream: Where can you live stream the Matches?

The World Cup Qualifiers matches will be available for streaming on SonyLiv and Jio TV. Fans will need to purchase a premium SonyLiv account to live stream all the matches.