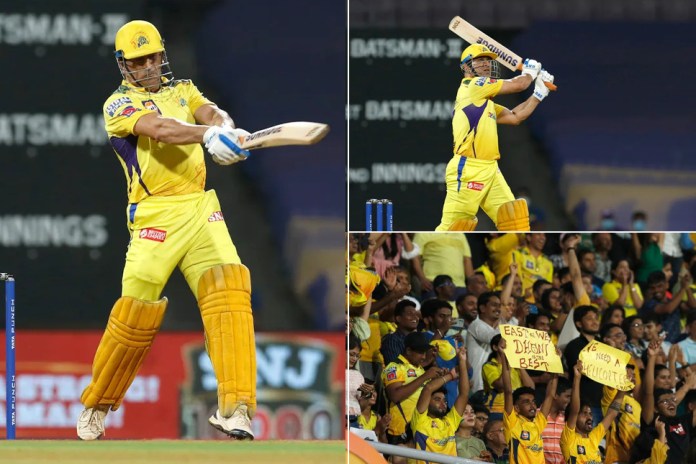 IPL 2022– CSK vs DC Live Updates – MS Dhoni was seen at his vintage best on Sunday evening as he turned down the clocks to score 21 runs in just eight deliveries while also running quickfire singles. The cameo knock from Dhoni was timely reminder why he is still one of the best finishers in the business as Kevin Pietersen in commentary and fans inside the stadium witnessed a true master class. Follow IPL 2022 Live Updates and CSK vs DC Live Score on InsideSport.IN.

Dhoni at his very best – Called into action late on in the game, Dhoni’s was seen hitting the ball out of the park on two occasions. His short cameo included a four as well as he struck at a strike rate of 262.50 while making sure Chennai Super Kings (CSK) mounted a total in excess of 200 runs. The fans inside the stadium were served with entertainment of highest quality, equivalent to a box office hit movie as fans enjoyed the Dhoni cameo.

Kevin Pietersen mesmerized – KP was one of the fortunate ones who was at the ground and reacted on Dhoni taking quickfire singles, “I don’t know how he does it. He is running like a 19-year old and mind you, he is 40. He still strikes as if he is in his 20s.”

While Murali Karthik was also a keen observer of the game highlighted, “Rishabh Pant is not able to communicate with the fielders in the deep because of the roar Dhoni is getting. It’s deafening.”

The fans had their equal share of voice too as they cheered Dhoni as he was back to his very best. The CSK skipper had initially left the captaincy but once again resumed duties after Ravindra Jadeja relinquished the duties.

Internet takes note of Dhoni – While Dhoni was seen smashing the ball left, right and center, the internet and social media wasn’t sitting back as they too joined the conversation. Here are some of the fans who took note of Dhoni’s remarkable innings.

Yeah, life is hard. But only until Dhoni starts hitting sixes.
💛👑 #CSKvsDC pic.twitter.com/6LKkHsVjKZ

MS Dhoni, just your appearance is enough to make my day. But when you hit even a single six, that’s hit different, that’s the cherry on the cake.
Love You Mahi 😍💛#CSKvDC #MSDhoni𓃵 pic.twitter.com/PFhx24wdf7

One fan even mentioned Dhnoi’s slog over record

The CSK skipper has been one of the best in the business in the game of cricket while also showing how fit he is at an age of 40.