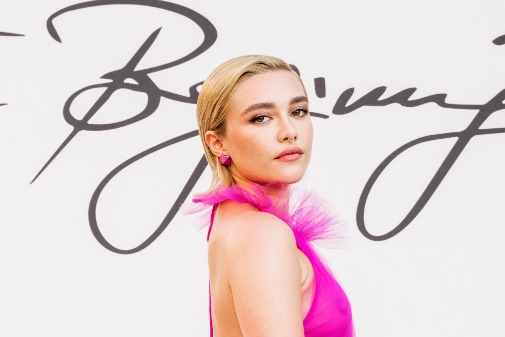 Florence Pugh was a hot pink princess at the 2022 Valentino Couture show in Rome.

The actress sat with a star studded front row to attend the July 9th show, making her presence known among some serious celebrities in a neon pink gown. Other notable attendees were Anne Hathaway, Kate Hudson, and Naomi Campbell.

The Valentino dress Pugh wore was made of vibrant tulle. The bodice was a halter style with very sheer coverage and no sleeves. The star layered the high neck tulle over top a full opaque skirt that added an extra layer, while creating dimension. Pugh wore geometric pink studs and a golden septum piercing, slicking her short blond hair back for an editorial look. The star did not accessorize beyond her jewelry, and kept her makeup clean and simple, save for a smokey brown wash over the lids. For footwear, Pugh opted for the same shoe style Hathaway wore to the show, donning neon pink Valentino Garavani platforms. The shoes offer the rather short actress some extra height, lengthening her legs in the process. These heels have become a huge success amongst supporters of the brand for their diversity and insane heel height.

Valentino presented its haute couture show in Rome on July 8. The star-studded runway event was held across the streets running from Piazza Mignanelli, where the brand has its headquarters, and near the famed Spanish Steps. In honor of the show, Valentino worked with the city to restore the mosaics of the Terme di Caracalla, the city’s antique and second-largest Roman public baths, where the brand’s post-show dinner was held. It also donated new palm trees near the Spanish Steps.