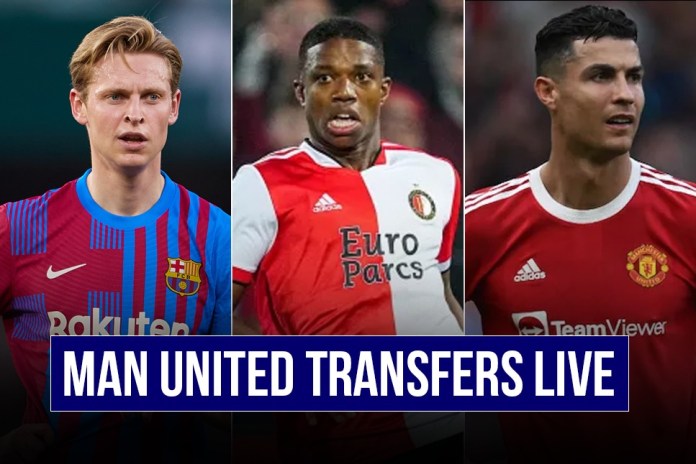 Man Utd transfer news LIVE: Manchester United LIVE transfer updates – Manchester United’s summer transfer plans have been rocked after Cristiano Ronaldo handed in a shock transfer request. Meanwhile, Erik Ten Hag’s recruitment team are busy chasing his first signing, which could be one of Frenkie de Jong, Tyrell Malacia or Lisandro Martinez. There are updates on all three, including a new £39.6million bid submitted to Ajax for the latter, who Arsenal are also fighting for. Follow Latest Football News LIVE with InsideSport.IN

Ronaldo leaving Manchester United? Man United says ‘he is not for SALE’, will Cristiano Ronaldo turn up for training session on Monday? Follow LIVE UPDATES

Lisandro Martínez and his camp will be clear again with Ajax board: he only wants Premier League football. So he wants to make a choice between Arsenal and Man United proposals, hoping for Ajax to let him go. 🔴 #transfers

The 24-year-old is wanted by the Red Devils this summer, with United recently making a transfer bid below Ajax’s £43million valuation. Martinez has established himself as an accomplished centre-back for both club and country, a valuable asset when winning trophies with Ajax and Argentina.

But his 5ft 9in height still forces the defender to face questions in relation to his size. But if his comments on Liverpool star Virgil van Dijk are anything to go by, Man United vs Liverpool will be exciting to watch out for. He said, “I would prefer not to be like Virgil van Dijk. His height is certainly a big plus, but when you don’t have the other qualities, it is worth nothing.”

Seven stars who could replace Ronaldo at Man United following the Portuguese’s request to LEAVE, Check out CR7’s potential replacements

Napoli, Bayern Munich and Paris Saint-Germain have all been made aware of Cristiano Ronaldo’s plan to leave Manchester United.

The 37-year-old has handed in a shock transfer request, asking to leave the Red Devils after just one season back at Old Trafford should the club receive a satisfactory transfer bid. The bombshell news comes on the eve of Erik ten Hag’s first pre-season tour, and while the new United manager is shifting his focus to finding a replacement, Ronaldo and his agent, Jorge Mendes, are now scouring the continent for his next destination.

The five-time Ballon d’Or winner is desperate to play Champions League football next term and avoid the Europa League mediocrity which the Red Devils will find themselves in come September. The three aforementioned heavyweights were all informed of his situation before it went public, having grown frustrated with United’s underwhelming transfer business this summer.

Manchester United boss Erik ten Hag has stumbled upon a frustrating situation at Old Trafford with what he had hoped would be a potential financial boost now in question.

Midfielder Andreas Pereira has been expected to quit Old Trafford this summer and provide the Red Devils with a useful addition to their transfer kitty. His destination was anticipated to Brazilian club Flamengo with the 26-year-old having enjoyed a successful loan spell.

It was thought that a £8.5m permanent buy option was slotted into the original deal but so far there has been no movement on a switch back to Brazil – with Flamengo refusing to stump up the required fee.

Tottenham and Everton have made contact with free agent Jesse Lingard – but money-bags Newcastle are still hopeful of landing the former Manchester United star.

David Moyes is focused on completing deals for Armando Broja and Jesse Lingard.

Antonio Conte is an admirer of the 29-year-old star who continues to weigh up his options after severing ties with Old Trafford after eleven years at the club. Goodison chief Frank Lampard is also on Lingard’s trail but after the club signed Dele Alli last season the Everton manager has to balance his transfer activity carefully .

Malacia deal to be completed tomorrow

The 22-year-old Dutchamn is said to be flying to Manchester today to undergo a medical.

Barcelona president Joan Laporta has offered updates on Frenkie de Jong and a number of the club’s top targets – and it’s not good news for Manchester United.

The Red Devils are thought to be negotiating personal terms with the Dutch midfielder having agreed upon a £56million deal, plus add-ons, with Barcelona. However, just when the long-running transfer tussle over the 25-year-old looked to be nearing its conclusion, it’s taken another twist.

Barcelona chief Laporta has insisted the cash-strapped Catalan club have “no intention” of selling De Jong this summer, while the player himself is determined to stay at the Nou Camp.