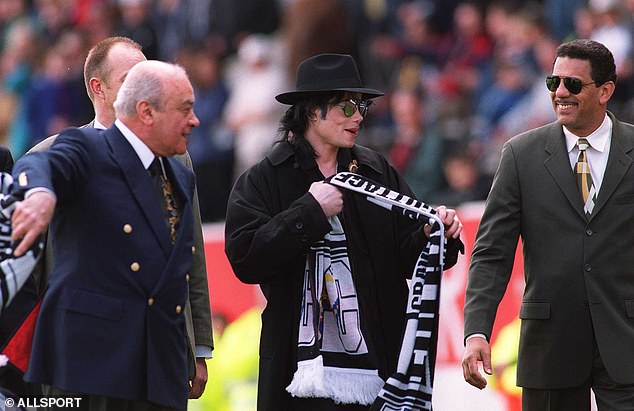 Fulham never did become the ‘Manchester United of the South’ as Mohamed al Fayed once promised but they did banish the mice from the dressing room and repair the showers, and they have risen once more to the Premier League.

In the 25 years since Al Fayed paid £6.25million for the west London club, then in the third tier and utterly broke, they have savoured 15 seasons of top-flight football, celebrated promotion five times and graced a major European final.

With respect to Johnny Haynes and Co, this has been an era of sustained Fulham success unlike any other.

The residual fear of enforced relocation from Craven Cottage has gone, with the stylish Riverside Stand due to open next season opposite the wooden seats, tin roof and classic lines of the old Stevenage Road Stand designed by Archibald Leitch and now named in honour of Haynes.

They own a modern training ground and an academy which is producing talent such as Tottenham’s Ryan Sessegnon, Liverpool’s Harvey Elliott and Fabio Carvalho, who has lit up the Championship this season and is tipped to follow Elliott to Anfield.

Quite a contrast for those who recall the days before Al Fayed, when they operated without a kit man or a paid scout.

‘We were skint,’ admits Simon Morgan, Fulham legend of more than 400 appearances. ‘There was a lot wrong and it had been that way for about 20 years. 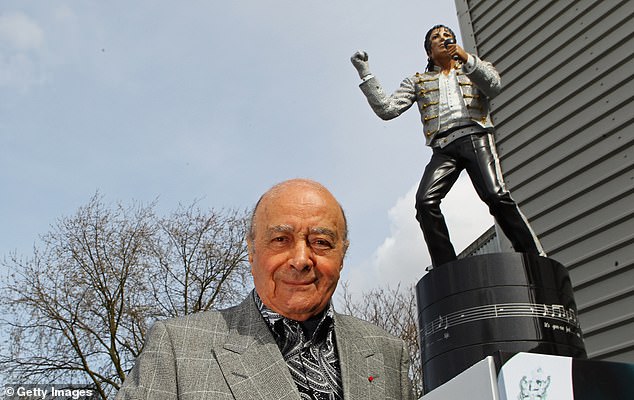 Al Fayed, at the unveiling of Michael Jackson statue at Craven Cottage, sold the club in 2013

‘There were mice running round the walls in the dressing room, showers that didn’t work, parts of the terracing were closed off and attendances went under 3,000.

‘We were a team of journeymen and Micky Adams dragged us up by the bootlaces from 91st in the Football League. It took a big effort from a small number of people to get us back on the right track and somehow get promoted. That’s when Mohamed came in.’

Al Fayed, the first in a new breed of foreign owners, was in a hurry. The Egyptian businessman owned Harrods in London and the Ritz in Paris and declared his intention to transform Fulham into one of the world’s greatest clubs. 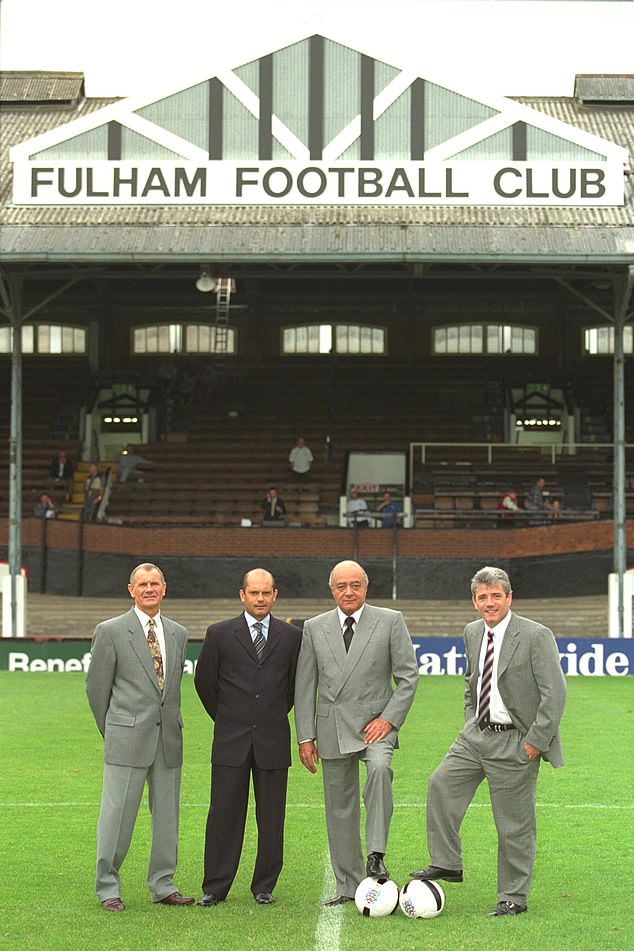 ‘That was the first real sign of the massive change coming,’ recalls Morgan. ‘We then spent a million on Paul Peschisolido. It was bewildering.

‘Our first game under Kevin and Ray was Wigan away at the old Springfield Park. There were about 50 photographers on the pitch as we ran out. They weren’t bothered about the players. All the lenses were pointing at the directors’ box.

‘We lost in the last minute so, even then, there was something a bit Fulhamish about it all, and the dressing room was so small that Kevin was standing in the shower as Ray was doing his team talk. Not a great start.’

Keegan left for England and Jean Tigana was in charge by the time they reached the Premier League in 2001 — ahead of schedule, according to the owner’s five-year plan. 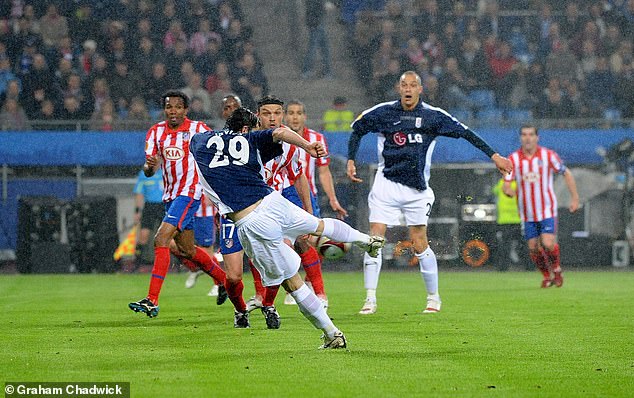 Star players such as Edwin van der Sar, Andy Cole and Dimitar Berbatov were signed. Managers came and went. As did random celebrities, although none made the same impact as Michael Jackson, who accompanied Al Fayed to Craven Cottage for a game against Wigan while still in his King of Pop pomp.

Jackson was honoured with a statue inside the stadium, which drew ridicule and complaints from Fulham supporters. ‘Go to hell or go to Chelsea,’ was Al Fayed’s typically frank response.

‘Apparently, he’d been doing a trolley dash at Harrods in the morning,’ says Morgan. ‘Then he came over with the chairman, who brought him into the changing room after the game and we all went back out on to the pitch to do some pictures.

‘Just bonkers. We were starstruck, like, “Wow, Michael Jackson’s in our changing room”. He said he’d enjoyed himself and what a great game it had been, in a very squeaky voice.

‘We were giving the chairman some stick when he brought Tony Curtis to the next game, telling him it was a bit of a let-down. You can’t go from Michael Jackson to Tony Curtis. 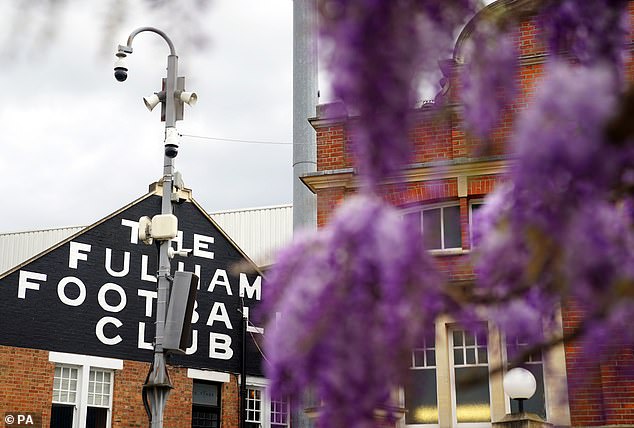 ‘Mohamed was larger than life. It was his club and when he came in he commanded the dressing room and he would tell us he loved us. Brilliant times.’

End-of-season parties at The Georgian restaurant at Harrods became a tradition. One insider recalled the incongruous sight of Louis Saha, dressed in an ice-white suit, locked deep in conversation in French with Princess Diana’s stepmother.

All of this set the template for the modern Fulham. Unashamedly ambitious with a hint of showbiz, evoking a time when George Best and Rodney Marsh generated popular appeal, and an unconventional owner who was quick with a soundbite and not afraid to make mischief.

When Mark Hughes was appointed and posed stern-faced for photographers on the pitch, Al Fayed could not resist pushing up the corners of the manager’s mouth with his fingers and telling him, ‘Smile, you’ve got a new job’.

Once back at the all-seater Cottage after lodging for two years at QPR, they flourished. Seventh under Roy Hodgson in 2009 was the best finish in Fulham’s history and they reached the Europa League final a year on, losing to Atletico Madrid after recording a famous comeback win against Juventus in the quarter-finals. 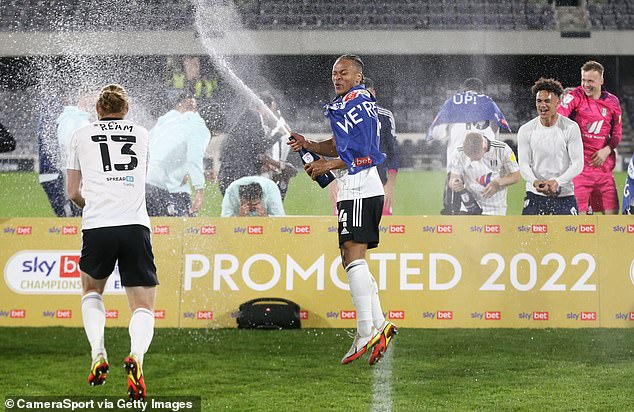 ‘Those European nights were fantastic and to stay up for 13 years was a hell of an achievement,’ says Morgan.

Al Fayed sold to Shahid Khan in July 2013 and Fulham were relegated within 10 months. Since then they have won promotion twice, both times via the play-offs, and come straight back down on both occasions.

This time, however, the feeling at the club is that they are better equipped to re-establish themselves in the Premier League, with more time to recruit.

Tony Khan has found his feet in his role as sporting director and has established a good working relationship with head coach Marco Silva and chief executive Alistair Mackintosh to build a team with attacking flair.

‘When you see what the new owner is doing, building the new stand means there will be virtually 30,000 people there for every game. It’s just fantastic,’ says Morgan.

‘I love going back to Craven Cottage and the best thing is there are still people working behind the scenes who were there in the bad times. It means Fulham keeps the identity it always had.’