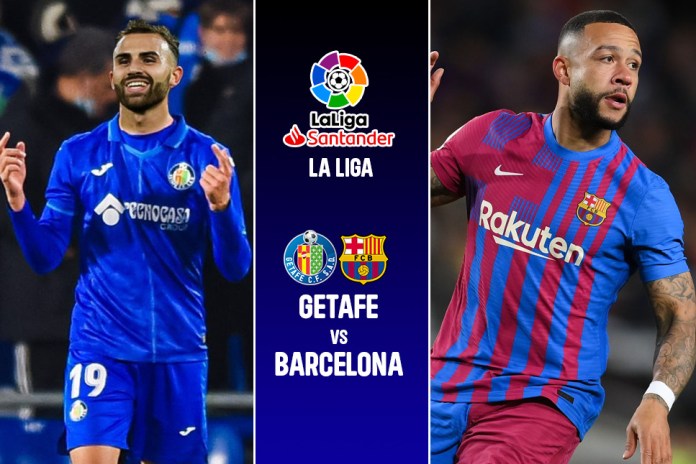 Getafe vs Barcelona LIVE: La Liga Live streaming – Barcelona will be looking to secure second place in the La Liga table when they travel to Coliseum Alfonso Perez to take on Getafe. The Catalan giants are currently second, five points ahead of third-placed Atletico Madrid, while Getafe sit in 15th, five points ahead of the relegation zone with two games left to play. Follow InsideSport.IN for more updates

Getafe will be missing Stefan Mitrovic through suspension this weekend, with the central defender being shown a red card during the 1-1 draw with Osasuna on Wednesday night.

Jaime Mata is also still missing through injury, but the home side are otherwise in good shape, and the team is expected to be similar to the one that took to the field for the first whistle last time out.

Damian Suarez is pushing to return as the right-sided wing-back, though, while Mitrovic’s absence could open the door for Gaston Alvarez to start in a back three for the home side.

Ronald Araujo is a major doubt due to concussion, while Gerard Pique is unlikely to be unavailable due to a thigh problem.

Nico Gonzalez, Sergi Roberto, Sergino Dest and Pedri are also out of the match through injury, while Jordi Alba, Frenkie de Jong and Eric Garcia are unavailable for selection due to suspensions.

As a result, Samuel Umtiti, Clement Lenglet and Oscar Mingueza could all feature at the back, but Barcelona will be boosted by the return of Sergio Busquets in the middle of the park.

A front four of Ousmane Dembele, Memphis Depay, Ferran Torres and Pierre-Emerick Aubameyang took to the field against Celta and that could again be the case in this match.

Getafe vs Barcelona LIVE: When, Where, How to watch the live streaming of La Liga matches?

When will Getafe vs Barcelona be played? – Date

Getafe vs Barcelona will be played on 15th May 2022

What time will Getafe vs Barcelona be played? Time
GET vs BAR match will kick-off at 11:00 PM IST

Where will Getafe vs Barcelona be played? – Venue
GET vs BAR will be played at the Coliseum Alfonso Perez

Who will be the Match Official for Getafe vs Barcelona? Referee

Jesus Gil will be the referee for the game