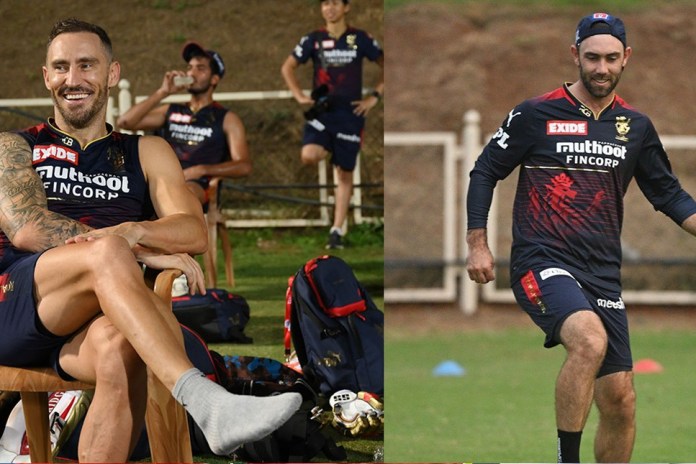 IPL 2022 LIVE Updates – RCB Faf Du Plessis: Royal Challengers Bangalore (RCB) has started their IPL 2022 campaign on good note. They have won 2 out of 3 matches and have looked assured of themselves. According to Australian dasher Glenn Maxwell, the team’s performance so far has brought in huge respect for captain Faf Du Plessis in Dressing Room.Follow IPL 2022 LIVE Updates & RCB in IPL 2022 with InsideSport.IN

“We think he’s (Du Plessis) going to do a great job for the franchise and even the way he started, you can tell he’s got the respect of everyone in the room. Not only does he lead by example, with his actions, but he also performs really well,” Maxwell told RCB ‘Bold Diaries’.

RCB in IPL 2022 – RCB vs MI LIVE: Maxwell, who missed the first few games due to his marriage, is expected to play against Mumbai Indians on April 9.

However the big-hitting Australian was effusive in his praise for the former Proteas skipper who has replaced Virat Kohli as the skipper this season.

.@Gmaxi_32 talks to @DanishSait about winning the WT20, getting married to an Indian, his interactions with coaches and captain Faf, and much more, on @KreditBee presents Bold Diaries.#PlayBold #WeAreChallengers #IPL2022 #Mission2022 #RCB #ನಮ್ಮRCB pic.twitter.com/NekyBSr82Y

“We think he’s (Du Plessis) going to do a great job for the franchise and even the way he started, you can tell he’s got the respect of everyone in the room. Not only does he lead by example, with his actions, but he also performs really well,” Maxwell told RCB ‘Bold Diaries’.

But Maxwell made it clear that it’s not just Du Plessis but even the other seniors need to help the skipper out as part of leadership group for smooth functioning.

“To have a guy of his quality and caper up the top of the order is something that’s great for the franchise. And hopefully, the senior guys around can help him out as well,” he said.

“So, it’s not just him shouldering all that workload we’d potentially have seen in the previous years at RCB. To have, I suppose, a solid leadership group behind him to sort of feel like it’s not just him out there having to shoulder all the load.

“Hopefully, we can help him out at different stages. But we’re very fortunate with the squad that we’ve got. We believe it’s a winning squad,” Maxwell said.

Maxwell is mighty impressed that 36-year-old Dinesh Karthik is still pulling off some special performances.

“I’ve been watching, and I think Anuj Rawat our own (youngster), he’s very exciting. Who I have been really excited by actually, was one of the old fellas, Dinesh Karthik.

“He’s (Karthik) been awesome. Just come in great form. Old fella is still doing it. I played with him in 2013 in Mumbai. Nine years later, we find ourselves back in the same change room. So, to see him go really well, and start well for us is awesome for us. We love having that depth in our batting order and he certainly gives it to us.”

Can’t wait to get out there

On his own form, Maxwell said that he has had quality training once he landed in Mumbai and is now eagerly waiting for game night.

“I haven’t done much over the last few weeks. I was looking forward to getting over here. I know I had a week from when I landed to the first game that I was playing, so, I wanted to do that as preparation time and know that I can get myself up to match ready for that first game.”