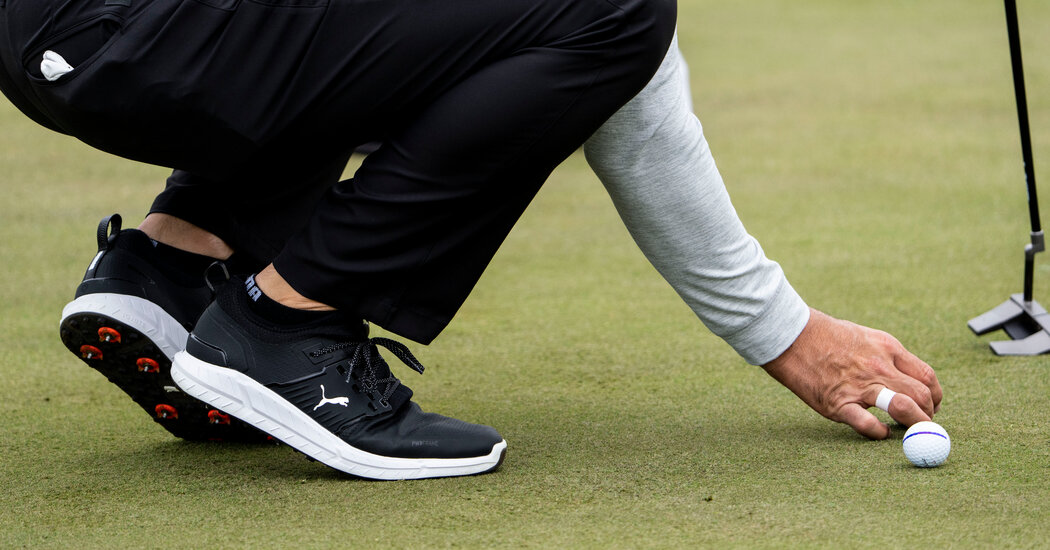 Streetwear — long the provenance of New York hip-hop and California surf culture — has been making its way to the green grass of golf courses.

“Golf has started to get cooler, and it’s become less standoffish because there are parts of the sneaker community that have embraced it,” said Jacques Slade, a sneaker YouTuber and golfer who has been vocal about the need for more golf shoes that reflect sneaker culture.

Hip-hop culture and sneakers have always had a close relationship, but the tie between hip-hop and golf might not be too far of a stretch, said Ankur Amin, an owner of the New York streetwear boutique Extra Butter. He said golf’s aspirational appeal has helped its style connect with his customers.

“So much that we do in street culture is about pursuit of the good life,” he said, “and so much about golf represents that, the same way Moët & Chandon or Louis Vuitton does.”

Tiger Woods, a Nike-sponsored golfer, brought a lot of new fans to the sport in the late 1990s, but dwindling interest in his products during the 2010s paved the way for a streetwear crossover into golf. Nike and a subsidiary, Jordan Brand, began releasing collectible silhouettes as golf shoes, such as the Air Max 1 and the original Air Jordans.

Sneakerheads salivated. “You have people that’ve grown up with the Jordan Brand,” said the rapper and golf entrepreneur Macklemore, who has done sneaker collaborations with Jordan. “It makes sense that people are going to go nuts.”

And sneaker culture’s grip on golf has only continued to grow. While the pandemic has devastated a number of institutions, it has also boosted participation in golf, as well as other activities conducive to social distancing like running, hiking and cycling, according to the NPD Group, a market research company.

“Once golf courses started opening up again, the business just took off,” said Matt Powell, the vice president of NPD Group and an analyst for the sports business, who said participation was also slightly up before the pandemic.

Many people bought golf sets at entry-level prices in 2020, he said, an indication that newcomers were picking up the sport. “Any of the beginners who are buying $400 golf sets are not going to drop $120 on golf shoes,” he said. “They’re going to play in sneakers.”

Sneakers have always been an overarching part of the millennial generation’s fashion choices, but now some adults in their late 20s and 30s have the disposable income to play golf — or, at least, to try it. Locations of Top Golf and Five Iron Golf, in some ways the sport’s equivalent to bowling alleys, have also opened across the country, which has made elements of the sport more accessible in urban areas where courses are harder to find.

“Golf is a game that’s very traditional, but if you look at millennials and all the generations that are following them, they’re never afraid to do something a little bit different,” said Gentry Humphrey, the former vice president of footwear at Jordan Brand who led the company’s entry into the sport.

Before Humphrey retired last fall, he also spent time leading Nike’s golf business. Part of Humphrey’s philosophy has been to transform Nike and Jordan sneakers that collectors covet into shoes that can actually be used on the fairway. “Kids are wanting to go out there,” he said, “and they’d rather go out there in something fresh.”

Although producing these golf sneakers may seem as simple as adding high-traction soles, there are also other considerations like waterproofing and modifying the cushioning.

“We didn’t want it to just be a basketball shoe that moves to the golf course,” Humphrey said, adding that Nike had developed new shoe technologies like the integrated traction bottom — a rubberized outsole without hard spikes that players could wear all day.

Another part of Humphrey’s strategy has been to provide a wider platform to start-up golf brands through product collaborations. For instance, Eastside Golf, a brand started in 2019 by the professional golfers Olajuwon Ajanaku and Earl Cooper, who played together at Morehouse College in Atlanta, aims to increase diversity in the sport and introduce younger to it.

“Who said you can’t play golf in a T-shirt?” said Cooper, the first African American all-state golfer in Delaware. “When they created these rules, minorities weren’t even allowed to play. People are trying to hold on to a tradition that was already broken or flawed.”

Ajanaku, who designed the trademark for Eastside Golf’s clothing line, which features a Black man in bluejeans wearing a gold chain and baseball cap while swinging a club, said the prominent placement of a person of color on the company’s products was a milestone.

“For us to actually have a logo of a Black man playing golf on our clothes speaks to everyone that has not felt welcome in the sport,” he said.

Eastside Golf’s logo was shown prominently on the tongue of their Air Jordan collaboration, which used the silhouette of the original Air Jordan IV, a retro sneaker that is highly regarded among sneakerheads. The golf spikes were removable so the sneakers could also be worn off the course.

Shoes that are convertible or can transition easily from the green to the clubhouse are one of the key innovations that have helped open up sneaker culture within golf. For fashion-minded individuals, half-inch spikes on the bottom of a sneaker can significantly alter the aesthetic of the shoe. So, brands are increasingly opting for subtle traction on the bottom of their golf shoes instead of straight spikes.

“There were so many people buying the golf product collaborations, but didn’t even play the game,” Humphrey said. “My phone was ringing off the hook more for the Eastside Golf collab than for some of the projects we did with Christian Dior. The sport is looking for another shot of energy, and this was a great way to introduce something new to it.”

On tour, eagle-eyed golfers or sneaker collectors may have spotted these shoes on the feet of Bubba Watson, 43, or Harold Varner III, 31, but even younger pros are also bringing a different swagger to the PGA Tour, Slade, the sneaker YouTuber, said. A lot of the players on the tour now, he said, “grew up listening to Travis Scott or Tyler the Creator. They’re coming into this world with a totally different perspective.”

“From the beginning of hip-hop culture, there’s always been this air of wanting to represent what you aspire to,” said Bernie Gross, Extra Butter’s creative director. “We come from backgrounds that don’t represent this, but this is what we hope to achieve one day. Golf is part of that.”

Rappers are also getting into the golf business. Drake launched a 10-piece golf collection with Nike that was worn by Brooks Koepka, a four-time major champion. And Macklemore, the Seattle-based rapper, launched his own golf line — dubbed Bogey Boys — in February 2021.

Macklemore started playing just two and a half years ago while on vacation, and was immediately hooked. But even before he hit his first 5-iron out of the fairway bunker, he was thrifting for classic golf looks from the 1970s. He started his independent golf brand because he saw a market in new players who wanted to bring a unique style to their on-course looks.

Since its launch a little over a year ago, Bogey Boys, whose looks are inspired by the swag of golfers like Arnold Palmer and Lee Trevino, has sold out of its first collection of limited-edition products, partnered with Nordstrom and opened its first retail location in Seattle in September.

Still, beyond collectability, style and functionality, Eastside Golf’s founders believe there are bigger takeaways for the conventionalist sport.

“Golf can learn from the sneaker culture,” Cooper said. “Sneaker culture is all about individuality. That’s what golf has been missing.”