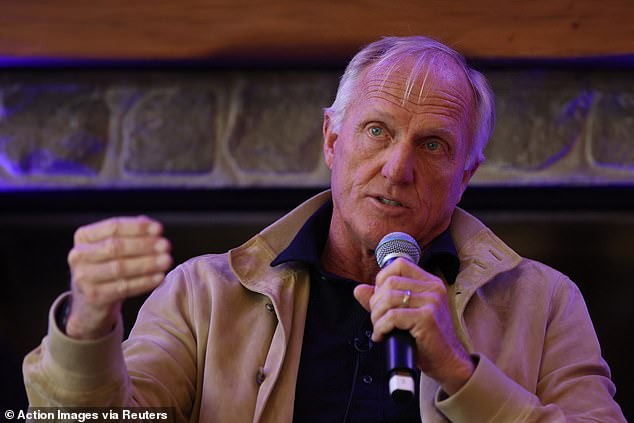 Greg Norman has been slammed for dismissing the horrific murder of Saudi journalist Jamal Khashoggi as a ‘mistake’ as he promotes his rogue golf league that’s backed by the oil-rich dictatorship.

The Australian former world No. 1 tried to minimise the brutal killing of the dissident journalist, who was cut into pieces with a bone saw on the orders of Saudi Arabia’s Crown Prince in 2018, by saying: ‘We’ve all made mistakes.’

Norman, 67, made the shocking comment on Thursday while spruiking his new billion-dollar breakaway golf series LIV, which is backed by the Middle East nation’s sovereign wealth fund.

Greg Norman (pictured) is pictured at the Centurion Club in St Albans, UK, on May 11, 2022 where he made the comments about Jamal Khashoggi 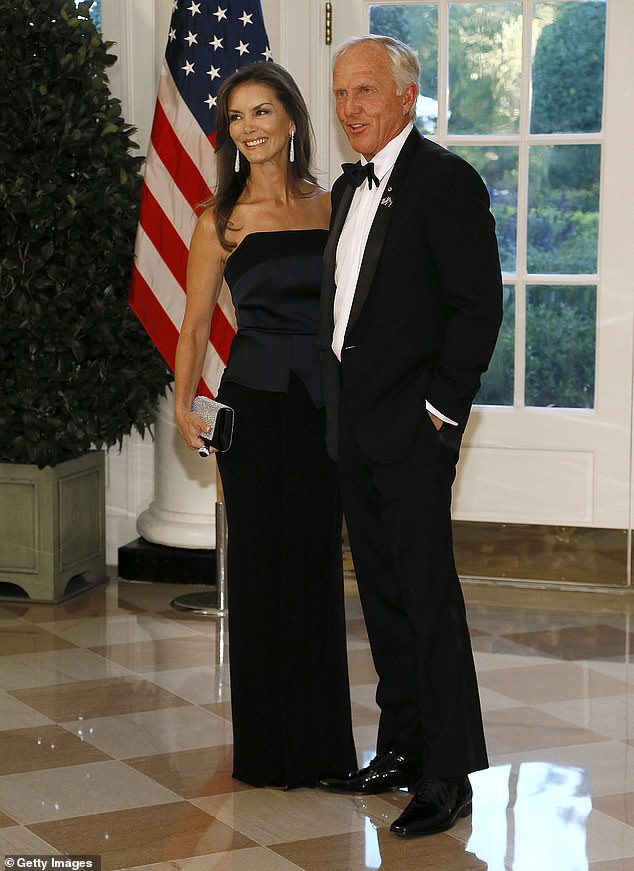 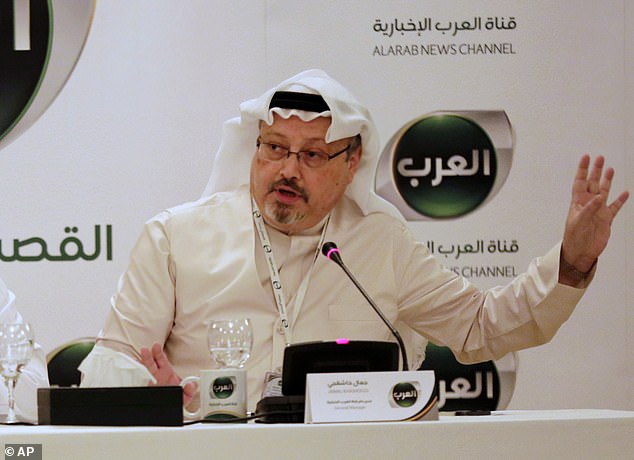 The Australian former world No. 1 tried to minimise the brutal killing of the dissident journalist (pictured), who was cut into pieces with a bone saw on the orders of Saudi Arabia’s Crown Prince in 2018, by saying: ‘We’ve all made mistakes’

The term ‘sportswashing’ is the practice of using sport as a propaganda tool to improve the reputation of a nation, company or individual.

Nations with poor human rights records will often look to host major international sporting events with the hope it will gloss over their treatment of minorities and raise their diplomatic standing in the world.

Sportswashing also happens when companies or individuals with shady pasts sponsor sporting teams or events to win favour in their community or with government.

The rival tour to the PGA – set to begin next month – has come under fire with critics claiming Saudi Arabia’s is using the sport of golf to ‘sportswash’ its appalling human rights record.

Norman, who is chief executive and commissioner of LIV Golf, was grilled by reporters about Khashoggi at the Centurion Club near St Albans in the UK where the invitational series will begin on June 9.

‘Everybody has owned up to it, right? It has been spoken about, from what I’ve read, going on what you guys reported,’ he said.

‘Take ownership, no matter what it is.

When asked about the 81 executions Saudi Arabia carried out in a single day in March, Norman said: ‘Quite honestly I look forward, I don’t look back. I don’t look into the politics of things. I heard about it and just kept moving on.’

He claimed the authoritarian regime that criminalises homosexuality and grants few freedoms to women was undergoing a cultural change and people should focus on the ‘good’.

‘This whole thing about Saudi Arabia and Khashoggi and human rights, talk about it, but also talk about the good the country is doing to change its culture,’ Norman said.

‘There’s not many countries that can stand up and be proud of that.

‘They can’t be proud of their past — there’s a lot of countries in this world that have a cross to bear too — but they are looking after the younger generation.’ 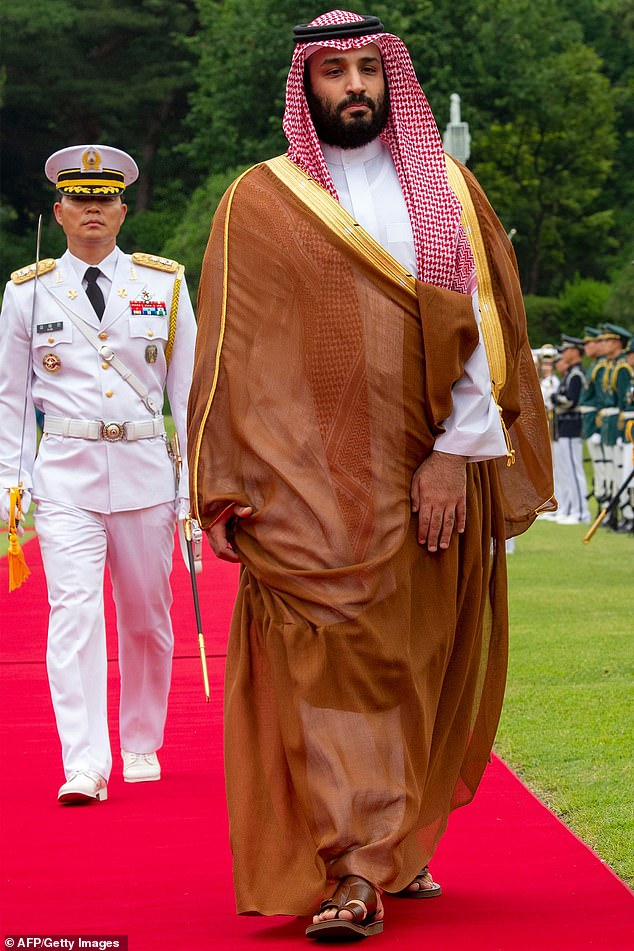 The gory details reveal that Khashoggi was lured to the Istanbul consulate before being set upon by 15-man hit squad and injected with a sedative and suffocated with a plastic bag.

The Washington Post columnist who regularly criticised Crown Prince Mohammed bin Salman then had his finger cut off with a bone saw before his head and limbs were also hacked off.

Hidden microphones put in place by the Turkish secret service recorded the gruesome sounds of the citrated blade cutting though his flesh.

Khashoggi’s body parts were then bundled into bags and smuggled out of the consulate. His final resting place remains a mystery.

Within hours the kill team left Istanbul on a private jet back to the Saudi capital Riyadh.

Crown Prince Muhammad bin Salman has denied any involvement but later said ‘it happened on my watch, so I am responsible’. 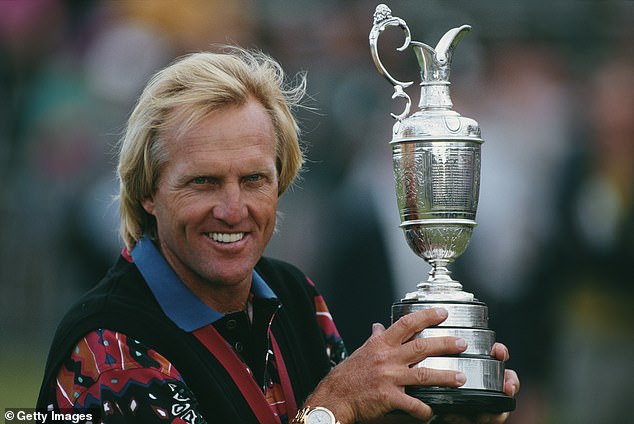 Norman, 67 (pictured in 1993), is launching a new billion-dollar breakaway golf series – LIV – which is backed by the Saudi Arabia’s sovereign wealth fund

Saudi Arabia have funded the LIV Golf Invitational Series to the tune of $3 billion with another $2.9 billion to fund events in 2023 and 2024.

Norman is trying to lure players on the PGA tour by offering mega sums of money in the already rich sport with the first event at St Albans handing out $25 million for the winner.

But the PGA has refused to let players participate in the rival competition, drawing outrage from Norman.

‘This is particularly disappointing in light of the Tour’s non-profit status, where its mission is purportedly “to promote the common interests of professional tournament golfers”.’

He accused the PGA of being an illegal monopoly, saying the Tour is ‘anti-golfer, anti-fan and anti-competitive’.

‘But no matter what obstacles the PGA Tour puts in our way, we will not be stopped,’ he vowed.

‘We will continue to give players options that promote the great game of golf globally.’

Norman even promised LIV Golf would pay the fines of any rebel who risked sanction to join his controversial series, and even represent them in court.