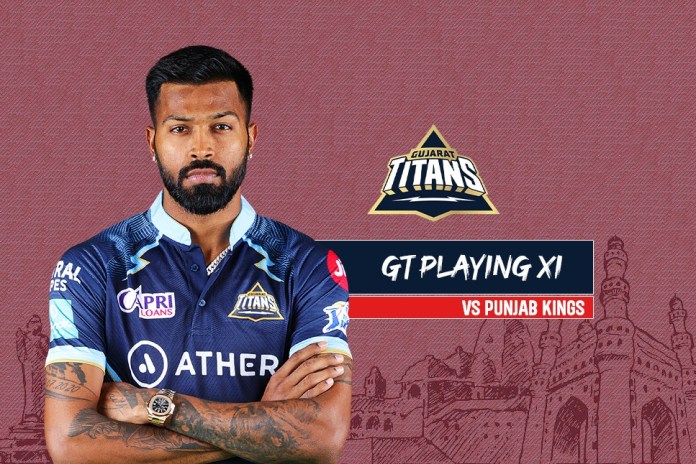 GT Playing XI vs PBKS: Gujarat Titans are the only unbeaten team in the competition as captain Hardik Pandya will hope that his side can continue their good form as they face off against the Punjab Kings on Friday. The Titans have done particularly well in both their matches, but some chinks in the armour still remain, as the newcomers aim to finalise their perfect XI going forward. Follow IPL 2022, PBKS vs GT LIVE updates on Insidesport.in

Gujarat Titans have relied on their bowling might to win them games and Hardik Pandya will hope that their batting turns up on occasion as they prepare to face the uber aggressive Punjab Kings.

Matthew Wade and Vijay Shankar both have failed to make the most of their chances and either one of the duo could be axed from the XI. The Titans have wicket keeper batsman Rahmanullah Gurbaz on the bench along with Indian veteran Wriddhiman Saha and either of them two could fill into the side. Uncapped domestic star Sai Sudarshan could also present himself as an option considering his success in SMAT20 and the TNPL.

Gurkeerat Singh Mann could also slot into the side, and his versatility to play anywhere across the batting order makes him a viable option for captain Hardik Pandya. Mann, who played for India in 2016, is likely to replace Shankar at No.3, in what is likely to be the only change to the XI.

Hardik Pandya himself has looked in fine touch, while Rahul Tewatia has also chipped in with runs down the order. Shubman Gill’s form is also a big positive but holes still remain in the side with places still up for grabs.

Abhinav Manohar hasn’t had much opportunity to display his talents and should maintain his place in the XI, as should the entire bowling attack after their demolition of CSK. Varun Aaron is the only weak link in their bowling but the Indian pacer should still retain his place in the lineup ahead of uncapped Yash Dayal and spinner Sai Kishore.