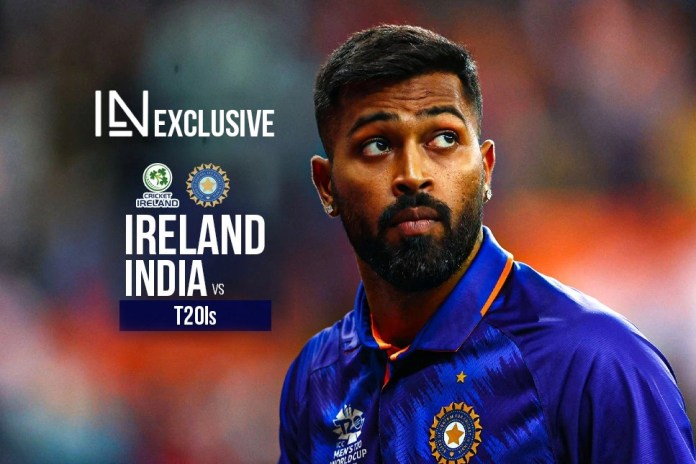 India Tour of Ireland: Hardik Pandya to lead against Ireland? – The luck seems to have turned for India’s flamboyant all-rounder Hardik Pandya. Impressed by his impressive performance and captaincy skills at Gujarat Titans, the selectors are mulling his name for the captaincy role in the Ireland series. Follow IND vs IRE Live & IPL 2022 Live Updates on InsideSport.IN.

“Hardik has been impressive. What is more satisfying is that he has become a very responsible player as a captain. He is certainly in the scheme of things for the captaincy role for the Ireland tour,” a member of the selection committee told InsideSport.

The Gujarat Titans captain has led the franchise to the IPL 2022 Final on their debut even though not many gave them a chance. He is amongst runs and is bowling regularly at over 140kmph. With KL Rahul and Rishabh Pant both set to join the squad in England for the 5th Test, Team India needs a captain for the Ireland series.

While Shikhar Dhawan was in the scheme of things earlier, the selectors want to test a new face for the role and Hardik fits the bill perfectly. He has been dubbed as the new Captain Cool after leading Gujarat from the front alongside David Miller in a tough 189-run chase against Rajasthan Royals in IPL 2022 Qualifier 1. India Tour of Ireland: Why Hardik Pandya is touted as captain for Ireland series?

“See, it’s still too early to make any announcements. Hardik is one of the names but a decision will be taken only during the South Africa series. What’s important is that he remains fit and in form. He is a very crucial member of the squad,” the member of the selection committee said.